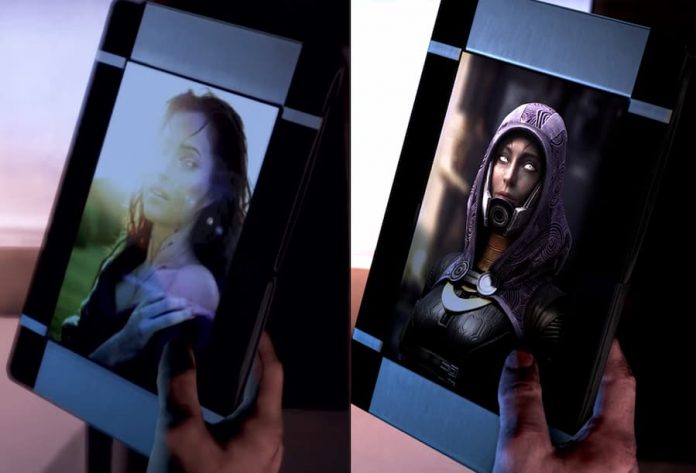 That might seem pointless when, as a Quarian, she spends her life in a protective suit which, amongst other things, covers her face. But her face was, in fact, revealed in Mass Effect and lot of people weren’t happy about it.

Their displeasure stemmed from a single scene in Mass Effect 3 where, after romancing Tali, Commander Shepard gazes at picture of her unmasked face, the image on the left. However, it was quickly discovered that this “portrait” was in fact a stock image of a model, purchased from Getty Images and given a quick Photoshop makeover.

On reflection, it also doesn’t make a lot of sense that “Tali” is standing unmasked on a grassy planet, having spent her entire life as a galactic nomad. What, did she just land on a potentially contaminated planet and, risking death, turn her suit into an off-the-shoulder number just so she could get a picture for a potential future paramour?

However, Mass Effect Legendary Edition remedies this by giving Tali an all-new picture that shows her, maskless, in her bio-suit. The change was spotted by Reddit user MaxGoods, and posted to the Mass Effect group.

It’s a definite improvement, though we’re still a bit miffed that our FemShep couldn’t romance Tali. That said, our first Mass Effect 3 run ended badly for Tali so heartbreak would be on the cards.

You can check out our review of Mass Effect Legendary Edition soon and pick it up on PC, Xbox One and Playstation 4 right now.