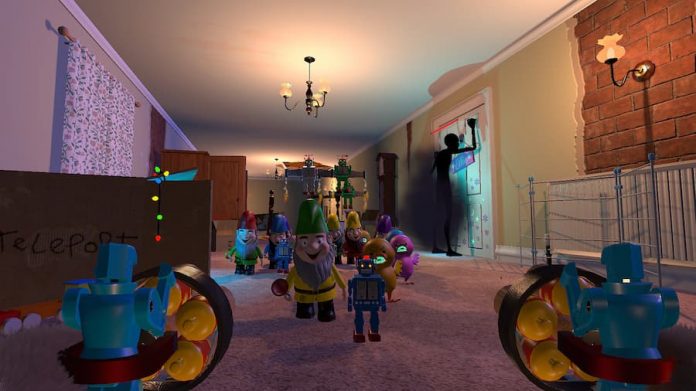 Originally conceived as a horror shooter for adults, Stuffed was redesigned from the ground up to be accessible to all ages after its developers realised that younger gamers perhaps aren’t being catered for.

Going hands-on with an early version of the game, Stuffed reminds me of popular online co-op multiplayer games such as Killing Floor and Call of Duty Zombies. Taking place inside the dreams of a young girl named Ellie, you’re a cute stuffed teddy bear. But Ellie’s dreams aren’t all butterflies and rainbows; for some reason a horde of toys and shadow creatures are against her, and so it’s up to you to protect the door to her room while she sleeps.

While Stuffed is indeed a shooter for all ages, if you suffer from gnomophobia or robophobia you might want to avoid it. The game takes place over a series of nights – providing you’re good enough to survive – with each night consisting of numerous waves. During each wave, foes wishing to inflict harm upon you and Ellie emerge from wardrobes and, you’ve guessed it, they primarily consist of garden gnomes and toy robots. They don’t particularly look threatening, but let them get too close and you’ll discover that they mean business.

There are other enemies too, of course, including evil rubber ducks and shadow beings. While most focus on coming after you, some, like the shadow beings, head straight for Ellie’s door. When this happens it’s paramount that you move to take them out fast; while dying is one way for the game to end, Ellie’s door being broken is the other. Thankfully, any damage done to the door can be repaired providing you have a kit to do so.

Repair kits and a whole lot more can be bought with the money earned by thwarting your enemies. How you spend your money, however, can have a great impact on your success. You’ll need money to buy better, more powerful weapons, for example, and to keep replenishing the ammo for them. Money can also be used to buy grenades, or in the case of Stuffed, bags of explosive popcorn. One of the most important uses of money, though, is to open additional doors of the house, giving you access to yet more weapons as well as additional space to breathe. A nice touch is that you can always quickly get back to Ellie’s door via blue portals in each room. 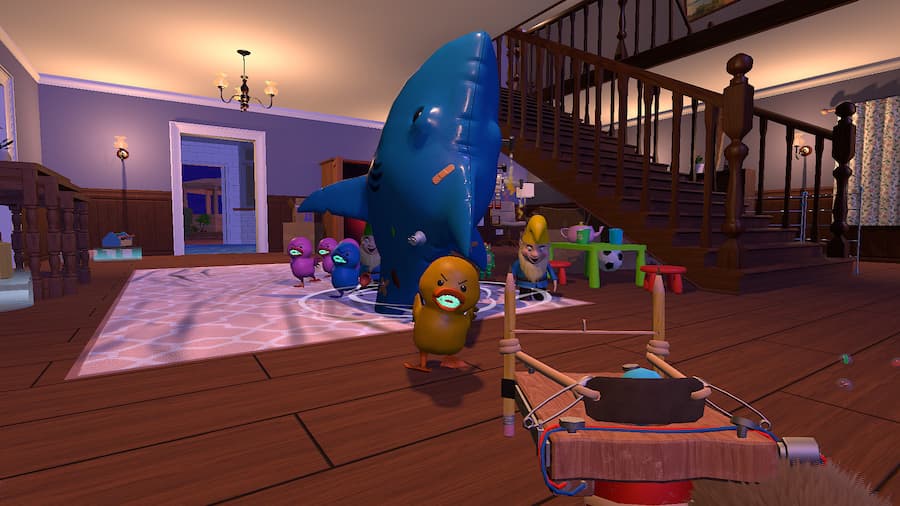 To further enrich the gameplay, enemies will sometimes drop helpful power-ups and even powerful Ultimates that you can activate in your desperate moments. There’s a level up system too; during each session you’ll earn XP, and when the XP bar fills you can summon a cart which will present you with a choice of three bonuses. You might opt for a lump of cash, a boost to your health, or even a self revive kit. Your destiny is in your hands.

Entering Steam Early Access this July, Stuffed is clearly a quirky game, and one that should be a lot of of fun when played with others. The preview build we played had some issues, such as popcorn grenades often not making a sound when exploding, but these should be ironed out pretty easily. In the long-term, developer Waving Bear Studio plans to also add online PvP game modes into the mix to complement its existing single-player and co-op modes (local and online). In addition to the game’s procedurally generated maps and customisation options for both your teddy and weapons, there should be plenty of incentive for players to return to the game time and time again. 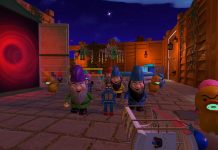