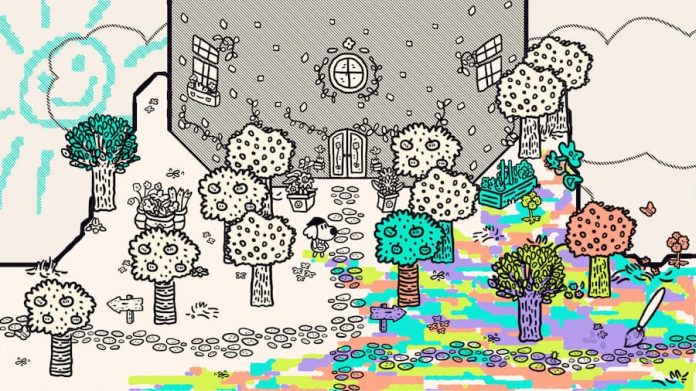 An open world adventure? That you have to colour in yourself? It sounds weird, but that’s the best way to describe Chicory: A Colorful Tale.

The hero of Chicory isn’t your typical adventure-game protagonist. There’s no sword or shield in sight; in fact, there’s no real combat whatsoever. Instead, your hero is a dog who starts out as nothing but a lowly janitor. Named after your favourite food (or a randomly-generated food), this hero inadvertently becomes The Wielder; the most important person in all of the land – the person in charge of colouring everything in.

You see, the world of Chicory: A Colorful Tale is black and white and, without The Wielder, that’s how it would stay. But The Wielder, equipped with their magical paintbrush that’s been passed down from Wielder to Wielder, can colour in the world around them, designing it in their own vision. Taco – that’s the name of my hero – finds the brush outside of The Wielder’s room. And with them nowhere to be found, she picks it up and takes it for herself, granting herself the power of The Wielder.

Describing Chicory‘s gameplay is difficult, as there really is nothing else quite like it. At times, it’s reminiscent of the likes of Link’s Awakening or A Link to the Past in its exploration and adventuring elements; like those old-school Zelda titles, you’ll often need to gain a new skill before you can reach a new area of the map. And getting from A to B might require you to do a bit of puzzle-solving. But its focus on colouring, combined with its lack of combat, make it completely unique.

Some of the puzzles you come across as you progress through Chicory are truly engaging. It’s rare you’ll ever be stumped for long; look around your nearby environment and you’ll usually find the answer. Perhaps you’ll have to flip some switches to move something out of your way, or maybe you’ll have to figure out how to move a bomb to blow up a stone that’s blocking your path. Other times, you might have to find a pattern that you need to replicate in order to unlock a door. 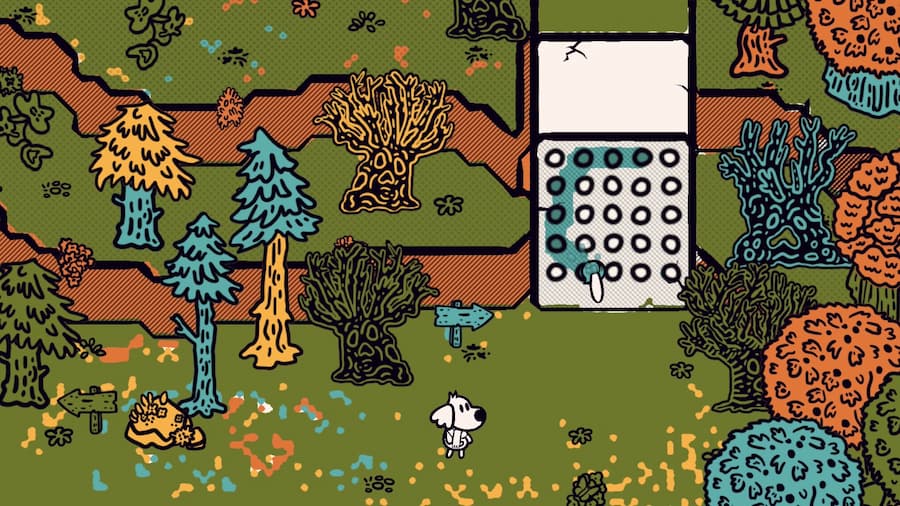 If you ever are stuck, there’s an ingenious built-in hint system that you can access at any point from a phone booth; your character will phone home to talk to their parents. Mum will give you a simple hint that might nudge you in the right direction. But stay on the phone and dad will come on the line; he’s much more detail-oriented, so he’ll tell you exactly what you need to do. It’s a nice touch, and its implementation is wonderful.

What’s perhaps most surprising is just how much life has been packed into Chicory‘s world. You can focus solely on the story, and you’ll still get a glimpse of the bustling environments that bring the game to life. But choose to spend some time talking to NPCs, wandering off the beaten path, and you’ll find so much extra detail and a huge amount of love that the developers have poured into making Chicory: A Colorful Tale as deep and rich as possible. Concentrate on the story and you’ll be done in 10-12 hours. But choose to dig deeper, and you’ll still be busy after 25 or more hours.

There are plenty of side quests to complete, a huge number of collectibles to find, letters to deliver, and more. How much of it you choose to engage with is up to you, but it’s certainly worth at least side-stepping from the main story once in a while. The characters of Chicory‘s world, especially, are worth chatting to; each and every one of them, despite being a black-and-white sketch on the screen, has been created with a big personality in mind. You’ll grin, chuckle and empathise with dozen of characters if you choose to speak to them. 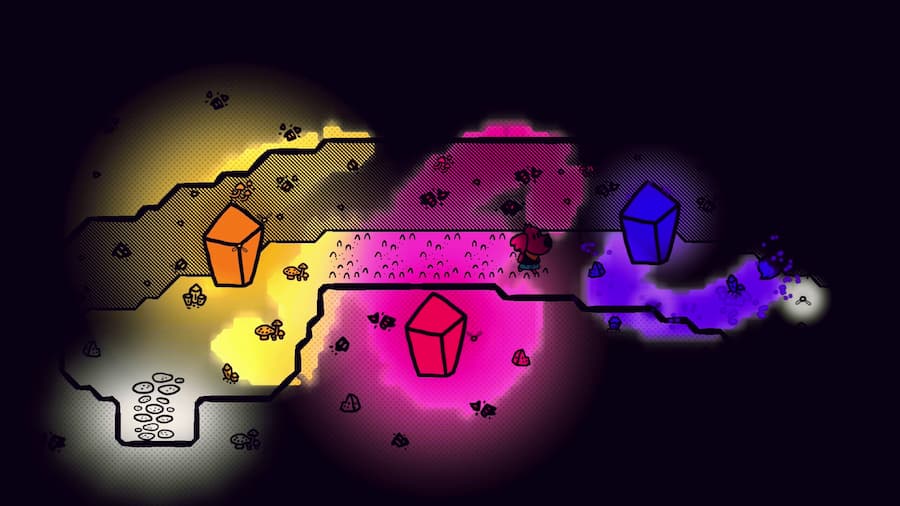 There are some irritations, though. Chicory: A Colorful Tale‘s 2D top-down viewpoint can sometimes obfuscate your view, making it difficult when you need to jump across a platform, or land carefully on a moving target. Some sections require you to use rainclouds to clamber up to a platform; you’ll need to paint the cloud, jump into it, then jump to the next while it’s lined up. It requires a quick succession of button presses, and the controls aren’t tight enough to be accurate, which leads to some frustration.

The game’s ‘bosses’ – if you can really call them that – are more of a distraction than a highlight in my opinion, too. You see, the world is becoming corrupted, and it’s believed to be linked to the paintbrush – so it’s The Wielder’s job to face up to these corruptions. They result in the only form of combat in the game: you’ll need to dodge incoming attacks and deal damage by rapidly painting your target. They’re a bit messy, and taking damage doesn’t really result in much of a penalty. It’s simply a case of getting through them in order to progress the story. 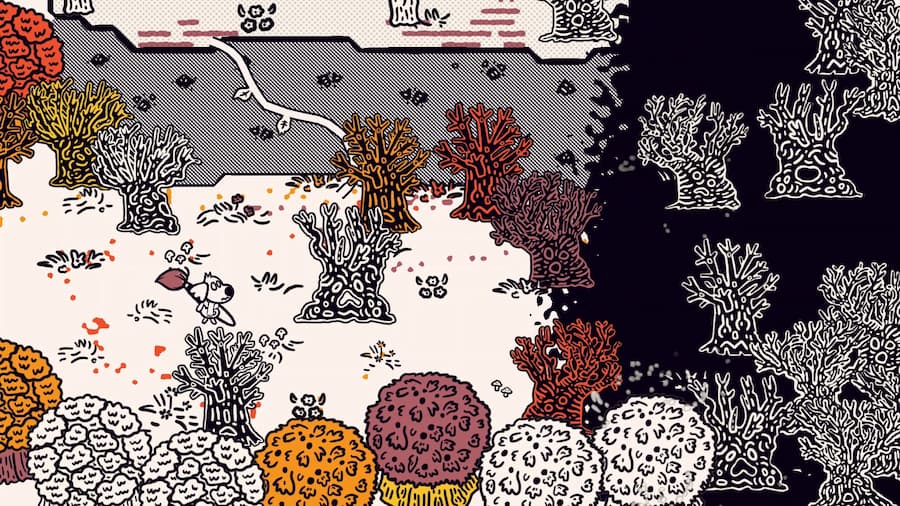 Thankfully, any frustrations are few and far between, and the overall charm of the rest of Chicory means they’re quickly forgotten. Yes, jumping through rainclouds or navigating moving plants can be fiddly, and fighting a ‘boss’ might be annoying, but you’ll soon forget about it when you’re back in a town, chatting to NPCs or idly colouring in someone’s house. That’s the joy of the game; you can ignore everything around you if you want, and simply enjoy colouring in. If you’re artistic, maybe you’ll create a masterpiece. Or maybe you’ll simply haphazardly apply colour to only what you need, leaving a patchwork trail of scribbles in your wake.

If you like the idea of an open world adventure filled with wonderfully written characters, engaging puzzles and a heart-warming story, don’t hesitate to give Chicory: A Colorful Tale a try. It’s so much more than “a game you colour in yourself”; it’s a journey filled with heart and soul. It isn’t free of frustrations, but they’re easily forgiven thanks to just how charming and wonderfully unusual this adventure is.

This review of Chicory: A Colorful Tale is based on the PS5 version of the game, via a code provided by the publisher. It’s available on PC, PS4 and PS5. 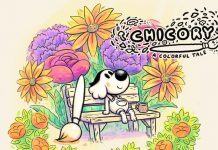 Chicory: A Colorful Tale is Coming to PlayStation Later This Year