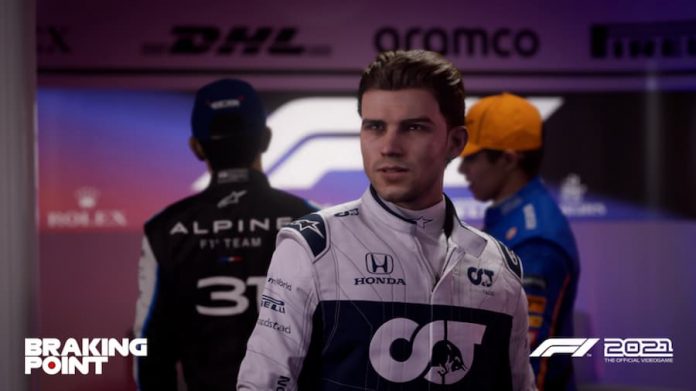 F1 2021 is just over a couple of weeks away now, and so Codemasters has given us the opportunity to familiarise ourselves with the cast of its Braking Point story mode a little.

Allowing players to choose from one of five teams and then compete to become a star, Braking Point is shaping up to be one of F1 2021‘s highlights. On the track players will find the usual thrilling action that Codemasters’ F1 series has been providing for years, only now further refined. And in between races players will be treated to immaculately created CGI story scenes. But just who are the stars of the show? Codemasters has outlined just five of them.

Devon Butler is a character that will be familiar to those who have played F1 2019. Braking Point’s brash, cocky antagonist, he first appeared in that title’s story scenes during the F2 feed-in. In F1 2021 you’ll find that he’s always got something to say, and while his off-track behaviour is questionable, he’s a skilled racer intent on becoming a living a legend.

Next up are Casper ‘Cas’ Akkerman and his wife, Zoe. Casper is known for his calm temperament and dogged determination, which have both served him well during his illustrious career. Keen to lift his team away from the midfield battle, he feels the pressure when young talent breaks through. Thankfully Zoe is his rock, always on hand to lend a sympathetic ear. She also knows the sacrifices needed for Casper to remain competitive.

Rounding out the bunch are Aiden Jackson, Casper’s young and promising teammate who idolises him, and Brian Doyle, the direct liaison to the team principle. Aiden puts up a front for the cameras but is struggling with the transition to the big leagues, while Brian lives and breathes Formula 1 but doesn’t cope well when things don’t go according to plan. Needless to say, when all these characters are brought together, drama is bound to unfold.

You can read more about what to expect from F1 2021 when it launches this July right here. We also have some hands-on impressions, and more information about the game’s Braking Point story mode.

Check Out the Launch Trailer for F1 2021