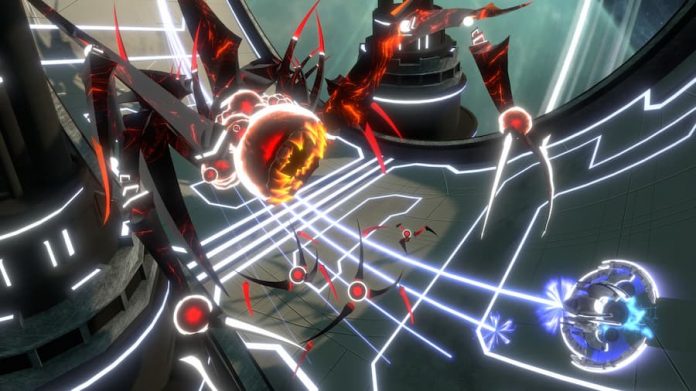 I appreciate that Curved Space tries to do something a little different – but it doesn’t quite pay off.

Designed to be an arcade-style twin-stick space shooter with a twist, I get the impression that Curved Space wants to stand out from the crowd. You see, each of its levels take place on curved battlefields; sometimes, you’ll drop off the edge of a platform, only to find yourself on the underside of it. Other times, you’ll curve around an Escher-style loop, twisting and turning only to end up back where you started. Or maybe you’ll find yourself on an asteroid, clinging to its surface as you make your way around its rocky exterior.

As you fire bullets, they too cling to the surface of whatever your ship is standing on, following the curvature of the floor. This is Curved Space‘s unique feature; the card it has played to make it stand out from the thousand-or-more twin-stick shooters that have come before it. And sure, it’s a novel idea, but it doesn’t enhance the gameplay in any way. In fact, clinging to a small, mind-bending combat area is often more of a hindrance than it is a feature.

Your main enemies in Curved Space are spiders. Sorry, arachnophobes. They don’t look like your typical house spiders that plague your bathtub and bedroom wall, however. These are space spiders. Rarely do they have eight legs; their big, round bodies and bright colouring makes them look more like mechanical drones. But they’re still spiders, and so you’ll still want to destroy them however you see fit. They aren’t alone, either – they’re accompanied by a range of other insect-like space creepy-crawlies, all out to get you, and all a prime target of your attacks.

There’s a range of weapons available to you in Curved Space. A standard gun starts out your arsenal, but new guns will drop regularly. You can only have two equipped at any one time, switching between them at will with a tap of the ‘triangle’ button. There are lasers, rockets, flamethrowers, javelin guns, homing missiles; a whole range, all of them firing slightly differently. Some guns let you simply hold down the trigger, spraying bullets constantly. Others, like the laser, require you to hold the trigger to charge your shot. You’ll quickly find your favourite weapons – though what weapons will drop is entirely random. 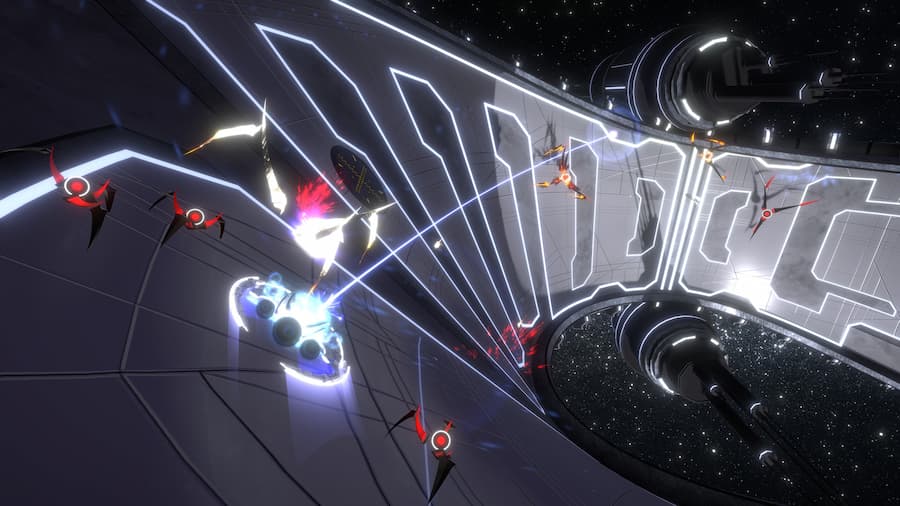 Along with shooting enemies, you’ll also need to occasionally harvest energy from them. The press of a shoulder button releases a laser-like ‘lance’ from your ship, which you can attach and chain onto enemies. You can also attach it onto a node in the environment, which will drain energy from enemies, effectively destroying them. If you’re playing through Curved Space‘s campaign, you’ll be told exactly when you need to use it. In other modes, you’ll likely completely forget the mechanic exists.

Playing on PS5, there are some nice uses of the DualSense here. You’ll feel the resistance of the trigger as you fire your weapons, each one feeling slightly different under your fingertip. There’s a nice amount of haptic feedback too, your controller rumbling in your palms as the action tenses up. The speaker is also used; sound effects sound great through it – your commander’s voice in campaign mode does not. Annoyingly, there’s seemingly no way to force it to come out of your TV speaker, either. 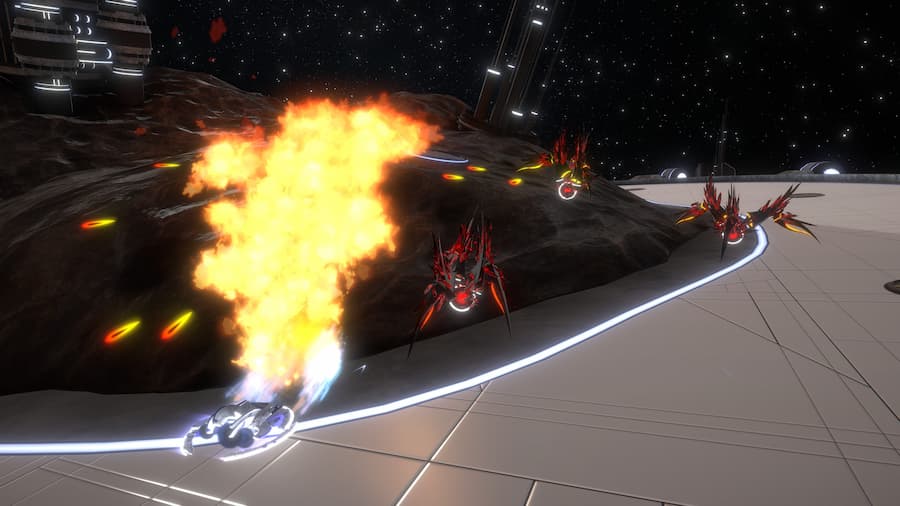 Despite the odd nice touch though, Curved Space remains rather dull to play throughout. Its environments might curve and twist in unusual ways, but they’re uninteresting to look at, painted in bland shades of grey and brown. It might be in keeping with our perception of space, but something a bit more eye-catching wouldn’t go amiss. Gameplay will never wow you, either. The variety of weapons on offer is the most interesting thing, but downing an enemy doesn’t pack any real feeling – a shame considering the DualSense implementation elsewhere. The twists and turns of your terrain, too, can make combat difficult – it’s not always clear where enemies are and bullets don’t always follow the path you think they’re going to.

In its defence, Curved Space has a variety of modes ready to be jumped into. Outside of its campaign – which will take a few hours to work through – there’s a daily challenge mode, a wave-based survival, a leaderboard-led arena challenge, and an endless mode. Whether you’ll care to jump in any of them after being bored by the campaign, though, remains to be seen.

If you’re a huge fan of twin-stick space shooters, Curved Space will do enough to hold your attention for a while. Its unique features don’t amount to much, however, leaving you with a rather mundane entry into an already crowded genre. Simply put, there are much better arcade shooters out there to spend your time and money on.

This review of Curved Space is based on the PS5 version, via a code provided by the publisher. It’s available on PS4, PS5, Xbox One, Xbox Series X/S, Switch and PC.