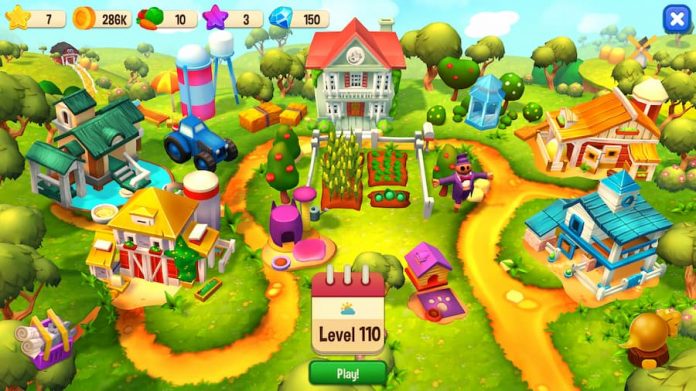 Farm Frenzy has been around for a long time in various forms, but it’s now on PC and console with a whole new look.

There’s certainly an air of mobile game to Farm Frenzy: Refreshed, but admittedly it’s transferred over to console fairly well. There are no microtransactions to be found, and no barriers to progression – as long as you don’t mind plenty of grinding. But this is the sort of game you can pick up for 20 minutes at a time; play through a few levels then move on to something else a little more stimulating. It’s certainly something I can see myself jumping into every day for a while to come.

This isn’t a farming simulator, per se. While your overall progression will go towards upgrading a home screen farm, there’s no involved gardening or animal-rearing to be found. You’ll simply use the stars you’ve earned in levels to unlock new upgrades, and those upgrades in turn will earn you money. It’s the levels themselves where you’ll be spending most of your time.

Each level tasks you with meeting a goal, be it collect X amount of eggs, make X amount of breakfast plates, gather X amount of money, or often multiple goals at once. They’re all different, and make use of different mechanics, all of which will be introduced to you gradually as you progress through levels. The very first level starts you out with ducks, which lay eggs. Those eggs can be turned into flans with the use of a machine. As you progress, new machines will be introduced along with new animals; you’ll soon have pigs which produce bacon (you don’t have to kill them; the bacon just… drops from them), cows which produce milk, and horses which produce… more horses (which can be sold for big sums of money). 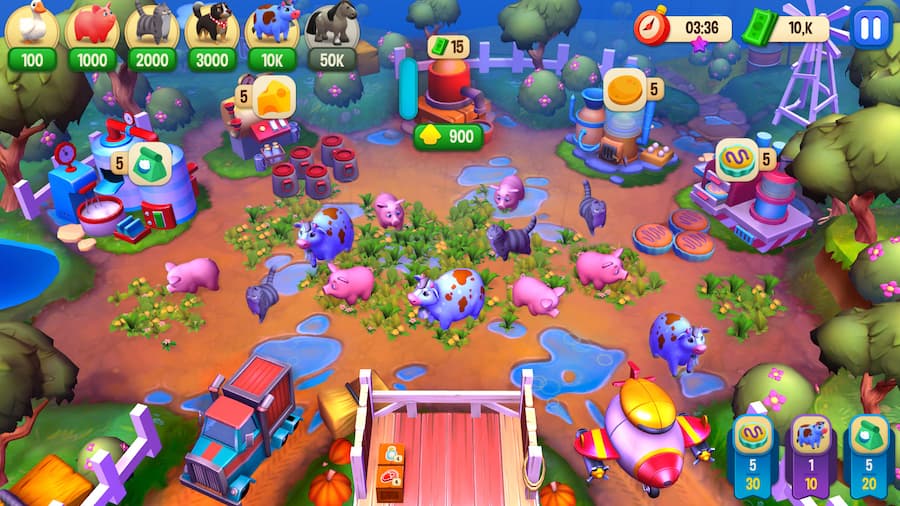 As you make your way through levels, the tasks you’re given get more complicated. You’ll have to make things like burgers and pizzas which require a lot of ingredients, some of which you’ll have to buy from a store. Other produce, like cheese, require a multi-step production; you’ll need to churn the milk, then turn it into curds, then turn it into cheese. Each level is timed, so the faster you complete it, the more stars you’ll acquire. The trouble is, finishing quickly is easier said than done.

To get the highest amount of stars on a level, you’ll typically have to have upgraded your equipment, which you do by spending gems. Gems are awarded after every level, and as you’d expect, the better you do, the more gems you get. But it means you’re unlikely to perform very well the first time, and to get the maximum stars you’re probably going to have to repeat the level later. 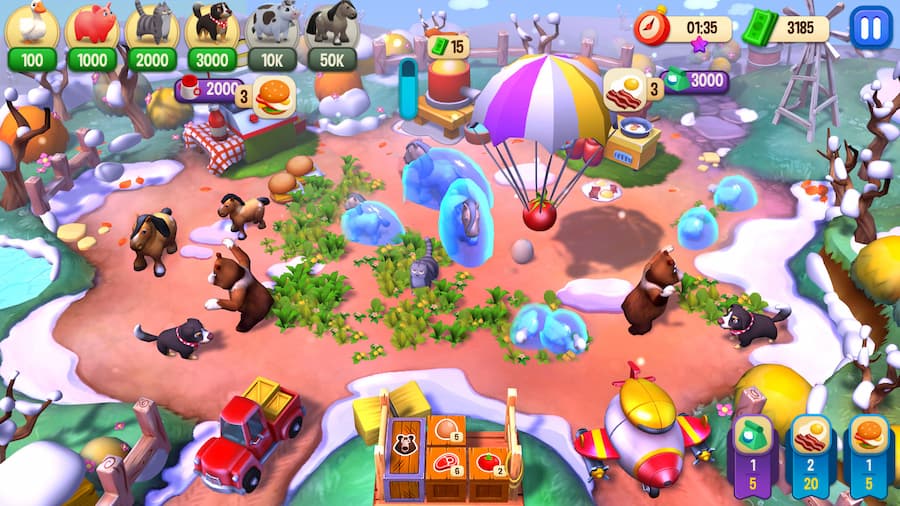 Since upgrading your home screen farm is your ultimate goal, you’ll likely have to revisit levels multiple times to earn coins, gems and try to get more stars. It gets tiresome after a while, especially since levels do get repetitive. Yes, they all ask you to complete slightly different tasks, but they boil down to the same simple procedures: click to collect animal produce, click to plant grass, click machines to create food items.

You’ll occasionally have other things working against you in levels too: on hot days, animal produce disappears quickly if you don’t pick it off the ground right away. On cold days, your animals will freeze, and need clicking on to unfreeze. Other times, bears will appear, threatening your animals unless you cage them. You’ll also have to make sure you have enough grass for your animals to graze on; run out, and they’ll be zapped away, never to be seen again.

All that clicking can get mindless very quickly, so Farm Frenzy: Refreshed is likely not something you’ll want to play for long periods of time. But in short bursts, it’s entertaining enough, and offers a nice palate cleanser between more involved, demanding games. Just be prepared to do plenty of grinding on your quest to unlock all the upgrades.

This review of Farm Frenzy: Refreshed is based on the PS4 version of the game, via a code provided by the publisher. It’s available on PC, PS4 and Xbox One.