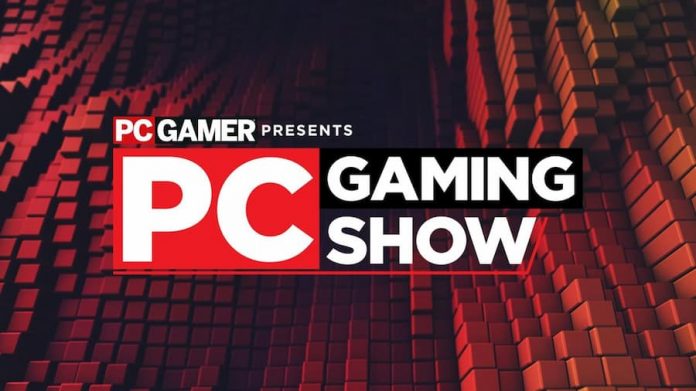 Missed the PC Gaming Show at E3 2021?Don’t worry – here’s everything that was announced.

Hosted by PC Gamer, the PC Gaming Show focuses on, well, PC games. As if you couldn’t guess that. Of course, some games shown off here will be multiformat, but there’ll be a lot of PC-only games too.

Read on to see a round-up of everything we saw during the PC Gaming Show.

First up was Naraka Bladepoint, a samurai-style battle royale game that sees you kill your enemies with swords and magical abilities. It’s been extremely popular on Steam playtest in the run-up to its release. There’s a beta you can join in on from June 16th. A new weapon, a chainsaw, will be available in August.

Launching on Steam on 12th August

This is a world premiere of a new game from Humble Bundle: a cutesy-looking cartoon dodgeball game called Dodgeball Academia. Level up, attack your opponents, travel through beautiful environments. It’s got a great style, and looks like a lot of fun.

Next up was Chivalry II. We got a word from Steve Piggott, the game’s creative director. We reviewed this excellent multiplayer battle sim last week. Torn Banner plans to support the game long after launch, with new maps and content. Essentially, it’s going to double in size – all for free.

Cooking and crazy combat rolled into one? That’s Rawmen. It’s a multiplayer brawler that sees you “get rude with food”.

No release date yet, but it’s coming to PC, Xbox and PlayStation.

Next up was another look at Dying Light 2, which was revealed earlier this month. We learn a little more about protagonist Aiden’s back story, and his desire to find his long-lost sister Mia – or at least uncover what happened to her.

Coming to PC and consoles on 7th December 2021.

We got a new trailer for Humankind, the upcoming strategy game from Amplitude. A beta is available now, before the game’s full release.

Coming to PC on 17th August

Up next was They Always Run, a side-scrolling action game from Alawar. Shoot enemies, explore a variety of locations, from futuristic-looking interiors to dark caverns. Use your grapple to quickly move from one point to another.

We got a CGI trailer for Orcs Must Die 3, a third-person tower defence game. It’s already available on Stadia, but it’s coming to other formats very soon.

Coming to PC, PlayStation and Xbox on 23rd July

No release date, but it’s coming to consoles and PC.

GigaBash is a multiplayer brawler game where you and your competitors play as Godzilla-type monsters and throw buildings at each other, and generally cause mass-scale havoc. Cool.

No release date just yet, but it’s coming to PC and PS4.

Lemnis Gate is a very cool-looking competitive multiplayer featuring time loops. It’s coming to PC and consoles on 3rd August, and there’s a PC open beta on 3rd July. Look out for more on this from us tomorrow.

Next Space Rebels was up next. It looks to be essentially a rocket-building sim that sees you building bigger and better rockets. Sometimes they fail and explode. Seemingly you’ll start with tiny bottle rockets before moving on to complicated space technology. It looks very interesting.

Coming this autumn to PC, Switch and Xbox

A brand-new medieval RPG, Wartales, was next. We didn’t get to see much, but it’s an open world game about leading a mercenary troop on a sprawling adventure. It’s coming in 2021.

Another world premiere: this is Ixion, a game set in a not-so-distant future when the Earth is dying. Company Dolos is all about space exploration, finding new locations for humanity to continue in outer space. Players will lead that exploration into the unknown, finding new planets, new materials and more. It certainly looks interesting.

Here’s another brand new release: FAR: Changing Tides, a follow-up to FAR: Lone Sails. This time, it’s set on the ocean rather than in the desert, though its systems and art styles will be familiar to anyone who played the previous game. It’s not a sequel, instead telling its own story. It looks rather beautiful, and you can find out more here.

Coming to PC and consoles later this year

Lakeburg Legacies is a game about building a legacy. It’s a light management sim with a social twist, all about managing your own kingdom. We’re digging the art style.

No release date yet, coming to PC

Silt is a striking adventure game, with a feel of an underwater Limbo – though its visuals are much more detailed and intricate. It’s very dark.

Coming to PC, no release date yet.

Hello Neighbor 2 is coming to Xbox and Steam in 2021. It looks much darker than the original, with a spooky setting that appeals to us a little more than the first. The trailer was brief, but gameplay looks much the same: sneaking around, trying not to be spotted by your terrible neighbor.

Releasing 2021 on Xbox and Steam

Here’s another world premiere: It’s called Soulstice, and judging by the trailer, it’s a fast-paced third-person action adventure. Use your giant sword and ghost companion to lay waste to giant enemies.

Chaosgate is a new game in the Warhammer 40,000 universe. The teaser is literally seconds long, so it doesn’t give us much to go on. But a full trailer will be coming in August.

Now this looks weird; floating women, stick-like creatures and people in hazmat suits. And lots of other things waiting for you to sink your bullets into them. It’s set in and around Chernobyl’s exclusion zone, as is fashionable lately (see also: Chernobylite, Stalker 2).

No release date or format information

A zany cartoon-style multiplayer about… herding dinosaurs? There are farming elements too, such as chopping trees, fixing bridges and improving your town. We didn’t get much to go on in the trailer, but it looks rather cute.

Available now on Steam, coming later this year to Switch

A 3D roguelike combat game. Fight against giant monsters in dynamic real-time combat. Dungeons are procedurally generated, so every time you play will be different.

Coming to Steam in August

Play as a tiny cartoon boy in a very big world. Control your own horde of Pikmin-like creatures and use them to pass through obstacles, fight against enemies and more. You’re so tiny you have a hideout INSIDE A GUITAR. It looks cute, and a lot of fun.

Here’s another look at The Farm 51’s upcoming survival horror game, Chernobylite. Set in the exclusion zone of Chernobyl, you play as an ex-employee of the power plant, visiting the region to find someone who went missing 30 years ago. Face off against human and supernatural horrors in what looks to be a truly freaky first-person romp.

Coming to PC on 28th July, Xbox One and PS4 later this summer

It’s an old-fashioned RPG with a beautiful pixel art style. It promises a blend of real time and turn-based combat. No release date yet – it’s currently backable on Kickstarter if it looks like your sort of thing.

A survival game about battling the elements. Stay warm in a harsh, snowy climate by building a hut and keeping a fire lite. And survive the arid heat of the desert, while fighting off all manner of threats.

Coming to Steam on 11th August

An open world RPG that’ll take you from the jungle to the streets. Engage in combat, explore dark environments and, seemingly, find a way to escape the planet. We’re digging the pixel art style here.

How about building your own village… on the back of a giant dinosaur? That’s the premise of The Wandering Village, a sim game coming to Steam. The short teaser doesn’t give much away, but it looks rather interesting.

This looks dark and eerie, and rather gory. There’s a space, cyberpunk feel to it, and a lot of rather freaky monsters to shoot your way through. It seems narrative plays just as big a part as gunplay does.

Here’s a medieval strategy game about conquering a map, battling your foes and raising a strong army. Build up your settlement, learn new skills and empower your warriors with a range of abilities and magical powers.

Here’s one more world premiere. Citizen Sleeper is a futuristic RPG about working aboard a space station. Make choices while talking to characters, learn new skills, build up your character and become whoever you want to be. Hack through locks, access secret files and find out all kinds of secrets.

It’s a first-person demon shooter with the feel of Duke Nukem and old-school DOOM. It boasts a unique art style, and looks rather action packed. If you’ve played the first Project Warlock, you’ll know what to expect.

Coming to PC on July 29th