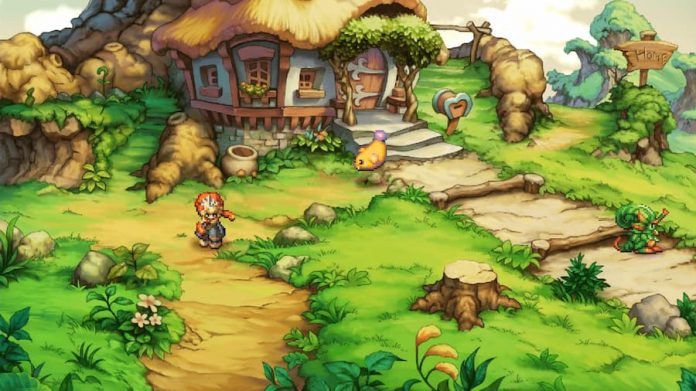 Some games just don’t age well. And as much as I hate to admit it, Legend of Mana is one of them.

If you cast your mind back to 1999, when Legend of Mana first released on PlayStation, it’s easy to see how some of its systems were stand-out. There’s no one set path to follow through the game, for example. By placing down map tiles, players can chart their own journey, visiting areas in almost any order and uncovering a variety of stories to play through. These stories are random and unconnected, with no single overarching narrative. For an RPG, it’s an unusual and noteworthy choice.

21 years later, with the release of Legend of Mana Remastered, that lack of a set path is still a novel feature, but one that doesn’t exactly add anything. In fact, the disjointed nature of the narrative strands detracts from the experience. With no real story to follow, it’s hard to truly care about your character and the people they meet on their journey. Yes, your character remains consistent – they’ll level up, learn new skills and get new equipment as you progress, just as they would in any standard RPG – but when you’re jumping from one random story thread to another, it feels as though nothing is worth investing in. In a fleeting moment, that story will be done, and you’ll be on to the next.

With absolutely no hand-holding whatsoever, it’s not always clear what your next step should be, either. If you have a new item to place on your map, you’ll put it down and see what the new location offers to you. But sometimes you might have to simply visit past locations to see if anything has changed. Even when you do have a mission to complete, its goal is often vague, and you’ll simply spend time wandering around a labyrinthine location to see what you stumble upon.

A lot of quests follow the same pattern: make your way through an environment in order to find a boss to beat. Bring it down, and that’s it – story over. Occasionally, you’ll have some environmental puzzles to solve in order to find where you need to go. But more often than not you’ll simply be making your way through a labyrinth of connected screens, going back and forth until you find the right way. 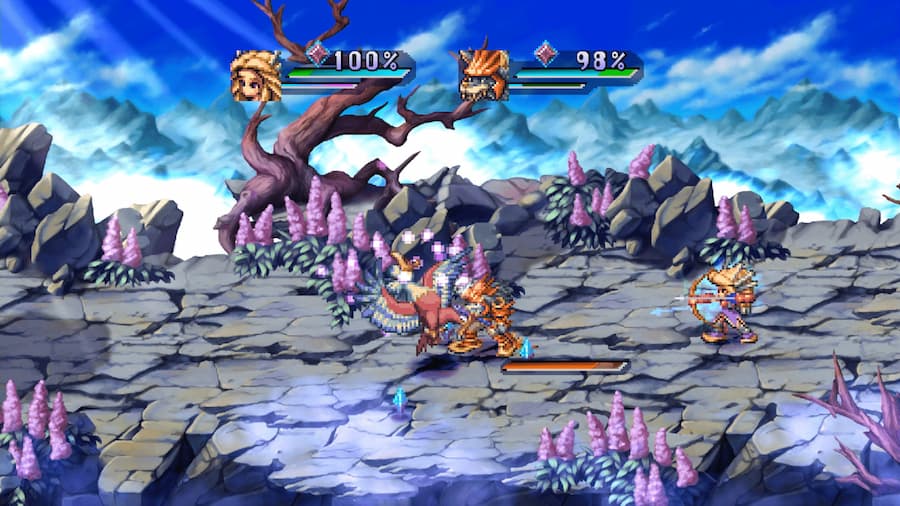 If you’re the type of person who likes to know exactly what they’re doing, Legend of Mana Remastered can quickly get frustrating. But the lack of direction and impetus on the player to set their own course will certainly appeal to some players. It makes Legend of Mana stand out, though it won’t be for the same reasons for everyone.

If you prefer to have more direction, there is an option: since this is a remaster of a 21-year-old game, the internet is filled with walkthroughs. So if you’re ever stuck, help is at hand. It shouldn’t have to be the case, but if it wasn’t for online information I wouldn’t have known basic stuff about the game: revisit your home after every mission so a cactus in your bedroom can jot down your adventures in a journal, for example. So a cactus can keep a journal. How is a new player supposed to know that? I’d already completed a dozen or so missions when I stumbled across that titbit, so the records of those particular adventures are lost to time.

Perhaps it doesn’t really matter, though. The joy of Legend of Mana is, I suppose, discovering new things as you go along, and experimenting with the outcome. Even the placement of world map tiles, or the order you visit them can affect how the game plays out. It’s interesting, but unless you’re willing to play through multiple times (there is a New Game + mode, at least) you’re unlikely to truly see the effects of the choices you’ve made. 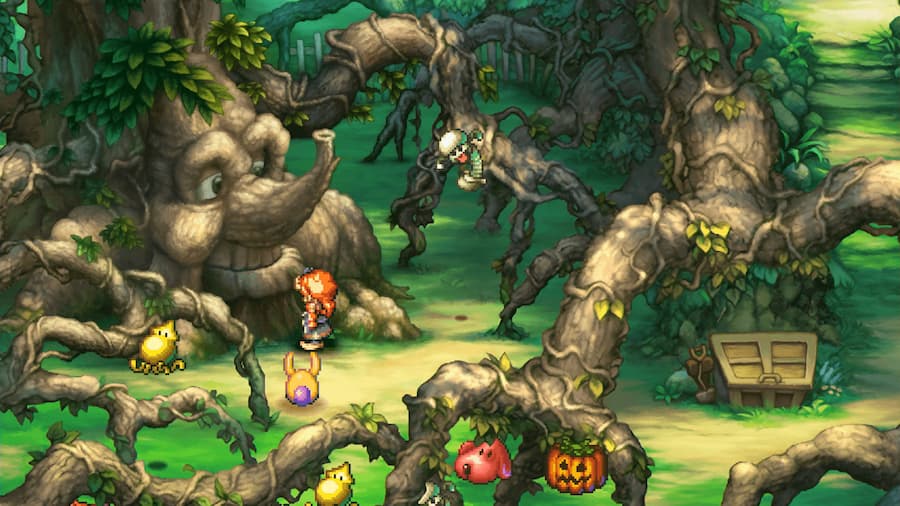 Whether you’ll want to play through Legend of Mana Remastered multiple times, though, is questionable. This is a game that still feels dated to play; your character is cumbersome to move around the screen, and it’s not always clear where you can go. Even talking to NPCs can be frustrating; if you’re not stood in precisely the right spot, you won’t be able to interact with them. Combat, however, is probably the game’s biggest let-down.

For starters, the camera angle makes it hard to know if you’re lined up to connect with an enemy, so whether or not your hits land is often pot luck. You have both basic attacks and heavy attacks, the former of which can be chained into a combo. You’ll also gain special abilities and magic attacks, allowing you to dole out greater damage. But special attacks take a few seconds to charge, in which time the enemy might have moved out of your hit zone. Your character is extra sluggish to move around the battle area, too, making it often difficult to move out of the way of an attack. And after landing a heavy attack or a combo, your character will be stuck in place for a second or two before you can hit again, leaving you open to take damage. It’s very easy to get stuck in a chain of spammed attacks from your enemies, especially if you’re up against more than one at a time.

Thankfully, Legend of Mana Remastered introduces a new feature that lets you turn off random enemy encounters. It means you’ll miss out on gaining XP and items through combat, but it can be turned on and off on the fly from the in-game menu. It’s a good option when you’re tired of endless battles – especially since enemies respawn if you leave the screen. So if ever you’re lost in an area, finding yourself wandering back and forth, you’ll be glad of the option to avoid fights for a while. 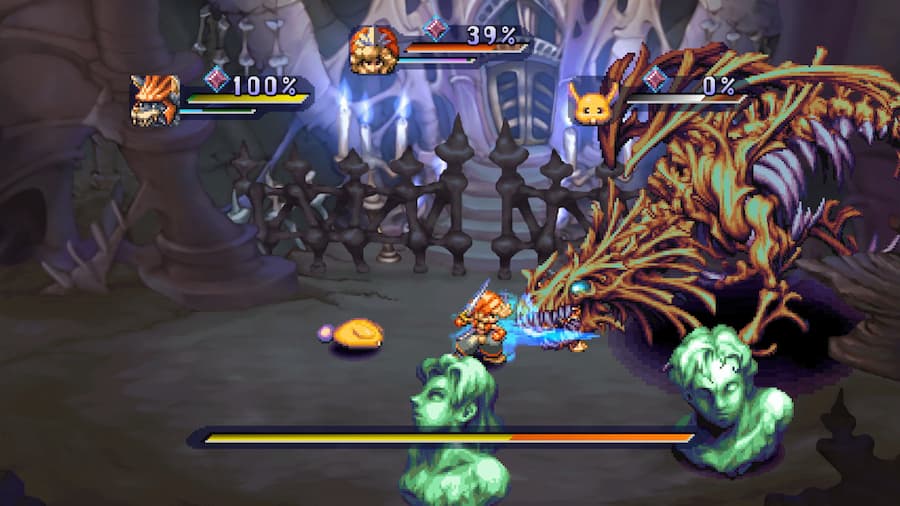 As far as remasters go, Legend of Mana Remastered is a strange one. Environments and backgrounds have been redone; pixel art has been transformed into crisp, HD pieces of art. They’re a pleasure to look at. But characters and enemies retain their original sprites. Large enemies and bosses look great, but smaller characters and foes can be hard to make out, and often look out of place juxtaposed against a smooth background. It’s not ugly, but it’s hardly pretty either.

The real stand-out feature of Legend of Mana Remastered is, without a doubt, its soundtrack. Even if you’re not having much fun trudging through the game’s random assortment of missions, I guarantee that your ears will be pleased as you take in its beautiful soundtrack. The original music has been rearranged for this new release, and players have the option to switch between the original soundtrack and the new arrangement. Both are fantastic; the soundtrack is truly a highlight of the game and emphasises just how good game music used to be back in the late 90s.

It’s hard to fully condemn Legend of Mana Remastered, because the original game’s choices are unusual, and some players will certainly find merit in its hands-off approach to steering the gameplay. Others, however, will undoubtedly find the lack of direction infuriating. So, Legend of Mana Remastered won’t be for everyone then. Its combat and lack of engaging narrative holds it back, but its soundtrack – both the original and rearranged version – is truly a standout feature.

This review of Legend of Mana Remastered is based on the PS4 version of the game, with a key provided by the publisher. It’s available on PS4, Switch and PC. 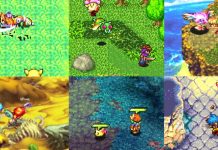 Looking Back Over 25 Years of the Mana Series: The RPG Tree of Life 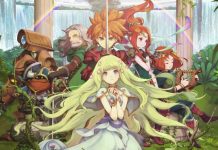