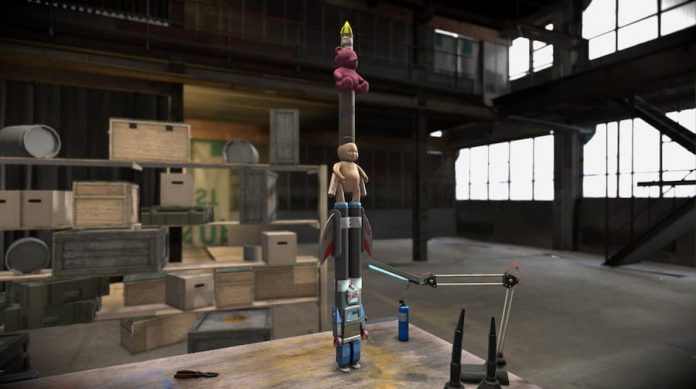 Fancy building your own rocket? Next Space Rebels will let you take to the upper atmosphere.

No, we don’t mean “stars” – Next Space Rebels, announced at last night’s PC Gaming show, isn’t that sort of game. Instead, it focuses on just getting a rocket into orbit, something that Elon Musk and several other private “entrepreneurs” have been trying to do; think Kerbal Space Program but starting small.

As you strive to be the first to win the budget space race, Next Space Rebels lets you incorporate some very strange features into your design; the trailer shows off a rocket-mounted teddy bear and doll, which is going to give some aliens pause for thought. Here’s hoping they don’t return in thirty years, asking to speak to Baby Wets-a-Lot.

Next Space Rebels sports an odd FMV feature – aside from getting to space, you’re trying to get hits on the in-game YouTube-a-like which could then help you fund your next vehicle. You’ll also be able to export your in-game footage to YouTube which is really making our brains hurt as we try to figure out what level of reality we’re on.

Next Space Rebels is being developed by Studio Floris Kaayk and published by Humble Games. It’s due out on PC this Fall but you can wishlist it on Steam right now.