You might have heard of Lost Ark – it’s a popular MMORPG that’s been around since 2018. It’s only been released in Korea, Japan and Russia so far though, but a western release is now on the way.

Announced today during Summer Game Fest’s Kickoff Live stream, Lost Ark will be making its way to PC in North America and Europe this autumn. There’s no set release date just yet, but a beta will be available at some point before the end of summer.

Lost Ark is a free-to-play game from Smilegate, the same company behind CrossFire. a massively multiplayer online action role-player game, it already has millions of players in the regions it’s already launched. And later this year, it’s set to get millions more.

It’s set in the world of Arkesia, where players will set out on a journey to find the titular fabled ‘Lost Ark’. You’ll be able to play as one of 15 hero classes, all with their own skills and combat styles. Happily, you can play the game by yourself or team up with friends – the way that MMOs are designed to be played.

Gameplay itself will see you travel through various environments, exploring dungeons, fighting deadly foes and more. There’s even a bit of base building as you get the opportunity to create your own island home.

Lost Ark is being published by Amazon Games in the west, so will be heavily supported by Twitch and Prime Gaming – two services owned by Amazon. We’ll have more information on Lost Ark, its release date, and the upcoming beta, as soon as it’s available. 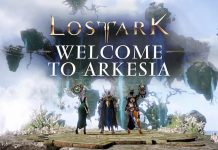