With over 300 games to choose from on Xbox Game Pass, it can be hard to know what to play.

That decision is even more tricky when you’re trying to find a game that’s suitable for kids. A game that looks cute and cuddly going by its cover might actually be a horror game in disguise (see: Five Nights at Freddy’s), and something else that looks bold, cartoonish and colourful might have more bad language than you’re comfortable with your seven-year-old hearing (hello, Battletoads).

But worry not: we’ve rounded up some of the best games for kids on Xbox Game Pass. If you are a Game Pass or Game Pass Ultimate subscriber, you can play each of these games at no extra cost. We’ve played and enjoyed them all ourselves, and even better, they’re suitable for players of all age.

So click on through to see our picks of the best Xbox Game Pass games for kids. 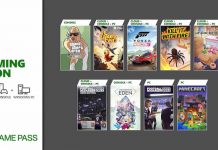