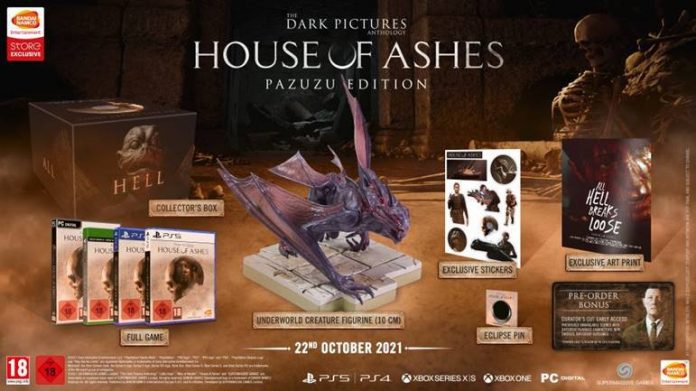 This October, The Dark Pictures Anthology: House of Ashes is set to take you back in time.

House of Ashes is the third entry in Supermassive Games’ series of interactive drama games but, whereas previous entries have been set (mostly) in the modern day, Ashes will take you back to Iraq in 2003, during “Gulf War 2”. And now, though we knew it’d see the light of day this year (unlike its hapless protagonists) it’s been confirmed for an October 22nd release.

We were already looking forward to House of Ashes after we were given an early hands-off look at it; you can check out our thoughts on that here. But what’s really grabbed our attention is the announcement of the “Pazuzu Edition” which features, amongst other things, a mini model of one of Ashes’ underworld creatures.

Granted, it doesn’t do an awful lot for the monster’s mystique, but the latest House of Ashes trailer already gives us a good look at the creature, so it’s not as big a deal as you might think. Aside from the model, the Pazuzu Edition also features:

The best thing about this, however, is that it’s not wallet-bustingly expensive. So far you can only order it from Namco Bandai’s website, but at £49.99 we’re sorely tempted.

If you just want the regular edition, it’ll be half that price and most stores are now taking pre-orders. There’ll also be a triple pack featuring Man of Medan, Little Hope and House of Ashes. Whatever version you go for, you can expect plenty of scares.

The Dark Pictures Anthology: House of Ashes will arrive on PC, PlayStation 4, PlayStation 5, Xbox One and Xbox Series S/X this October 22nd.

Pre-order The Dark Pictures Anthology: House of Ashes at Amazon