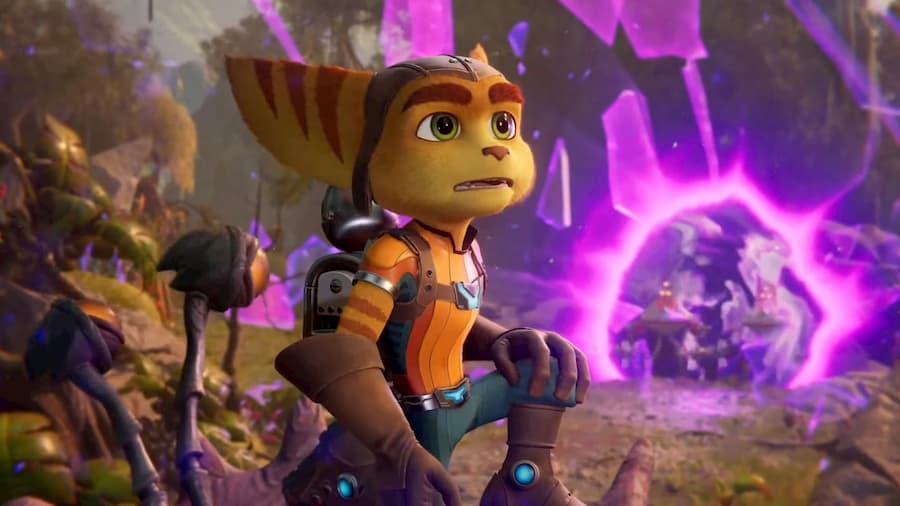 When planning a next-gen console launch, choosing which of your upcoming games will best demonstrate your new technology is surely one of the main aims.

With this in mind, it seems a little strange that an oddball duo from the PS2 era would be leading the charge. Be that as it may, Ratchet & Clank: Rift Apart, out later this month, is set to offer a showcase for Sony’s newest console.

Ratchet & Clank’s early days on the PS2 were spent as both friendly rivals to Sony’s other odd-couple, Jak & Daxter, and legitimate rivals to the ever-popular Mario and the declining-in-popularity Sonic. Faced with such stiff competition, any new series needed to stand out from the crowd. Developer Insomniac Games was coming hot from the release of its final Spyro game – and since the company didn’t own the rights to everyone’s favourite purple dragon, it was looking for a smash-hit to call its own.

2002 saw the release of the duo’s first game, simply titled Ratchet & Clank. It was warmly received. There were many kinks to be ironed out across the coming decades, but for now, Ratchet & Clank quickly found its niche in the crowded market.

Present right from the start was the now-synonymous focus on weapons and gun-play, a fairly stark contrast to other platformers which still relied, for the most part, on physical combat. The game’s graphics and technical prowess were lauded at the time and the characters quickly became fan favourites – although Ratchet certainly wasn’t the same lovable Lombax he is today. Clank had his own playable sections early on too; unlike Daxter, who’d have to wait until Haven City for his time in the limelight.

Insomniac Games was enthused by the success of its new IP and this success meant we’d see all almost-annual releases for over a decade. The first sequel, Going Commando, was a measured improvement on the debut release – as much as Ripto’s Rage had been to the original Spyro the Dragon. This was the first pun used in a Ratchet & Clank title, creating another now-synonymous mainstay. The third series entry, Up Your Arsenal, arrived in 2004, boosting the review scores even higher and now showing the industry that Ratchet & Clank was a force to be reckoned with. Even Jak & Daxter seemingly followed its lead, seeing gunplay added to Jak 2 and being doubled-down on in Jak 3.

After two more console entries – Deadlocked and Size Matters (the first not to be developed by Insomniac) – releasing during the PS2 era (and Going Mobile bringing the franchise to mobile gaming), Ratchet & Clank saw its first generational jump to PS3, landing firmly on its feet with Tools of Destruction. The new hardware meant Insomniac could flex its animation and graphical muscles a little more, with the cartoon style of the series playing very much to the PS3’s strengths. It also introduced one of the most iconic items from the pair’s amusing armoury: The Groovitron. Throw one of these disco-balls and you’ll see an explosion of glittering lights as enemies lucky enough to be caught in the blast area begin to uncontrollably strut their funky stuff.

Wacky weapons had been a staple of the series and we’d already met some weird and wonderful creations, like the RYNO, the Morph-o-Ray, the Sheepinator and obviously the Omni-wrench. But with Tools of Destruction, we were finally introduced to the comically cruel Mr Zurkon, who does not need bolts; his currency is pain.

As the Future series (Tools of Destruction, Quest for Booty and A Crack In Time) continued, each entry sought to tweak the game design just a little, with Insomniac Games presumably aware that it had already released half-a-dozen games and likely didn’t want the formula to go stale. This saw the introduction of dialogue trees in Quest for Booty, a game which itself felt like a cut-price proving ground for new ideas; it was only a few hours long, but sported an appropriately low price tag.

Seemingly learning all it could from Quest for Booty, Insomniac Games launched Ratchet & Clank: A Crack in Time in 2009 and saw a return to form – though the legacy of every previous game weighed heavy on its shoulders. Variety was introduced through the Chronoscepter, which allowed manipulation of time-based elements and obstacles within the environments, but it was hardly game-changing.

As the PS3 generation continued, Ratchet & Clank titles went on to provide revolution rather than evolution; Ratchet & Clank: All 4 One ditched the series’ staple platforming elements and instead opted to showcase four-player drop-in/drop-out shooter combat. Surprisingly the change was well-received: All 4 One had strayed so far from the core concept of Ratchet & Clank that it had found another niche and, alongside that, a new fan base. Unfortunately, the success of All 4 One wasn’t repeated with the series’ black sheep, Full Frontal Assault (or QForce as it was known in Europe), nor with the next follow-up, Into the Nexus.

With a gap of three years and the launch of a new generation, 2016 saw the launch of the PS4’s only Ratchet & Clank game, the simply-titled Ratchet & Clank. It was a reimagining of the duo’s first game, though also sported some adjustments to act as a companion piece for Ratchet & Clank’s first foray onto the big screen. While the movie – also titled Ratchet & Clank – was a flop both critically and commercially, the game was quite the success. The PS4’s graphical power meant that the always-strived-for-but-never-achieved “Pixar quality” visuals were within touching distance. Ratchet’s fur billowed in the wind, Clank’s rounded bonce looked smooth as could be, and the environments they visited were luscious landscapes with vistas and viewpoints aplenty. But this wasn’t the most miraculous stage of Ratchet & Clank’s lineage; that’s still to come.

Having seen just one entry on the PS4, here we are in the present day, barely six months into a console generation and in a crude comparison, the PS5’s 10.28 teraflops of power is roughly 1,600 times greater that of the PS2’s 6.2 gigaflops. To showcase this power, up step the big hitters for Sony: Demon’s Souls, Spider-Man: Miles Morales, Returnal and… Ratchet and Clank?

Our favourite lombax and his robot companion are now front and centre of a new console generation – and the strangest thing is, that even after 20 years, Ratchet & Clank: Rift Apart genuinely looks like it could be the best in the series yet. Just looking at the gameplay we’ve seen of Rift Apart so far, it’s clear to see how much effort has gone in from the developers; how much Insomniac Games has learned from its storied history with the titular twosome. The environments look breathtaking; they’re limitless and with activity in every pixel. That’s not even to mention the lifelike movement of trees and grass in the wind and the particle effects from firing weapons. Ratchet himself finds his fur not only billowing as the wind changes direction, but clumping together when it gets wet. When falling between portals to different worlds, those worlds within can be seen, each one alive and full of possibilities. These are levels of details and technical achievement not even dreamt of until now.

Of course, the proof is in the pudding, and gameplay trailers can only reveal so much. But with it launching in just over a week, everything points towards Ratchet & Clank: Rift Apart being the best in the series yet. The power of the PS5 means it will undoubtedly set a new bar both graphically and technically should the series continue into the future. And after 20 years, 12 console games, three mobile spin-offs and a movie, it feels like Ratchet & Clank still have life in them yet.