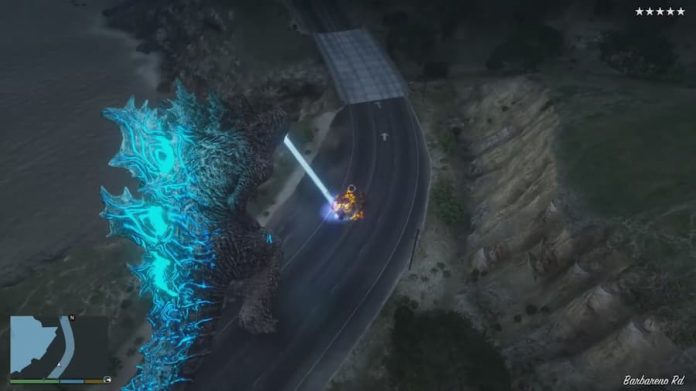 Grand Theft Auto mods don’t often catch our eye but this Godzilla one really is something special.

If you own the PC version of Grand Theft Auto 5 you can take to the skies as Iron Man, engulf the city in a tsunami, roam the streets as Robocop and get up to all sorts of other shenanigans. In fact, there are more GTA 5 mods than we could cover in a month.

What makes this upcoming mod so impressive, however, is the sense of scale. As initially reported by The Gamer, playing as Godzilla you tower above the streets to the point where individual civilians are all but invisible. The icing on the cake (especially when compared to previous Godzilla mods) is that you can incinerate your foes with Godzilla’s atomic breath.

Smashing buildings is, unfortunately, right out. As violent as Grand Theft Auto 5 can get, it lacks any kind of Red Faction style geometry-destruction mechanic, so stomping around breathing on people will have to suffice.

The mod is from JulioNIB, a modder who’s created a wealth of other Grand Theft Auto 5 mods. However, the mod is still in development so, while have a video of it in action, it isn’t yet publicly available. But you can join JulioNIB’s Patreon to get the latest updates on this and other mods.