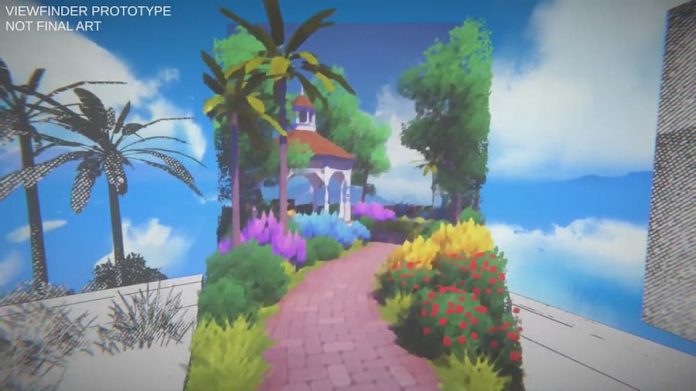 It’s not often we gush about a game this early in development but Viewfinder has the potential to be something special.

Yes, we’ve yet to see how this adventure game, from UK developers Robot Turtle, will leverage its unique mechanic into proper puzzles, or whether it’s going to be more walking simulator than adventure. But just watching the game in action makes us want to get our grubby little hands on it right now.

So what’s got us so excited? It’s Viewfinder’s mind and physics bending picture-shenanigans that had us gawping at the in-game footage, rewatching it till our eyes started to bleed. Your protagonist roams an already gorgeous-looking landscape but (presumably when faced by a barrier) has a very neat trick up their sleeves.

They can take a picture and then hold it up in front of them at which point (and, we’re presuming, in the right location) the 2D picture becomes a 3D version of whatever it depicts. The video, which you can see below, shows the player placing an image of a flowery path, then walking onto the path like it had always been there.

But that’s not all. In one scene, the player turns a photograph and objects tumble out of the image onto the ground. We’re suckers for games that mess with geometry but this really is something else.

Unfortunately, there’s no release date as yet, but you can follow one of the developers, Matt Stark, on Twitter.