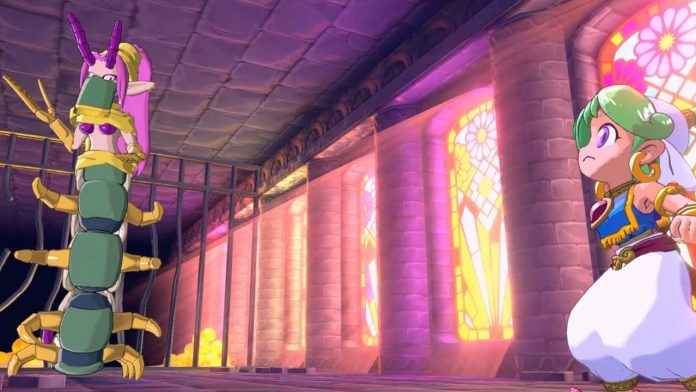 If you’ve played Monster World IV, you’ll feel a strange sense of deja vu when you jump into Wonder Boy: Asha in Monster World for the first time. Despite having a complete graphical face lift, it very much shares the same DNA; everything down to Asha’s cute little animation when she opens a treasure chest. It’s not a surprise considering the fact that its development has been led by the same team of staff who created Monster World IV in the first place.

There are funny little nods to the original, too, that are likely to go over your head if you’re jumping in as a new player. Talk to the Sage – previously the only way to save your game – and he’ll tell you that new-fangled technology has put him out of a job; you can now save whenever you like in the menu. But whether you’re familiar with Monster World IV or not, Wonder Boy: Asha in Monster World packs in a lot to love for fans of side-scrolling adventure games.

Players take control of the titular Asha and, like all good action-adventure games, she’s got a mission on her hands: to save the world. In Asha’s case, that means making her way through various areas, defeating a range of deadly foes and eventually facing off against a number of formidable bosses. Easy, right?

Asha’s not alone on her journey; early on, you’ll gain the accompaniment of Pepelogoo, an adorable flying creature. He can help Asha in numerous ways, including offering her the ability to double-jump and glide across large gaps. He can also be thrown to activate otherwise out-of-reach switches. Basically, he’s as useful as he is cute, and if you’re ever unsure of what to do, it’s likely your Pepelogoo is the answer. 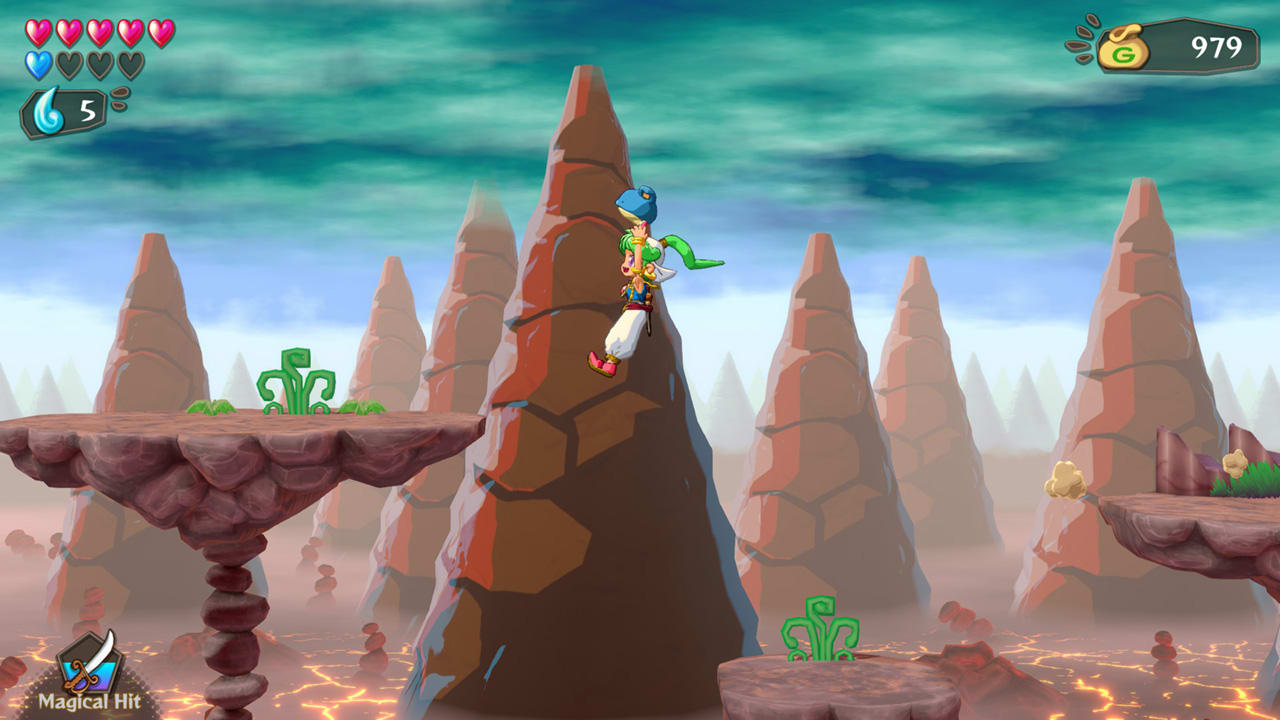 Throughout your time with Wonder Boy: Asha in Monster World you’ll visit a myriad of environments, from fiery caverns to icy caves. Yes, it’s a remake of a game from the 1990s, so every clichéd environment is to be found here. They’re all pleasantly varied though, with different enemy types to be found in each new area, and new challenges to undertake. Exploring each environment is mostly a joy, and you’ll need to employ a bit of brainpower too – some light puzzling has been cleverly embedded in the platforming, requiring you to collect items in order to proceed, for instance, or find and memorise passwords. It’s a welcome addition, and ensures Wonder Boy: Asha in Monster World‘s gameplay always feels fresh and engaging.

Your biggest frustration with Wonder Boy: Asha in Monster World is likely to come from the sometimes labyrinthine structure of its environments. It’s easy to lose your way, or find yourself going around in circles. It’s sort-of the point; it’s clear the areas were originally designed in this manner, offering a level of puzzlement to the otherwise straightforward side-scrolling proceedings. But through a modern lens its easy to see it as an irritation; occasionally getting lost being nothing but a way to artificially elongate the gameplay time. But explore enough, and you’ll always find your way, even if it sometimes means backtracking a little. 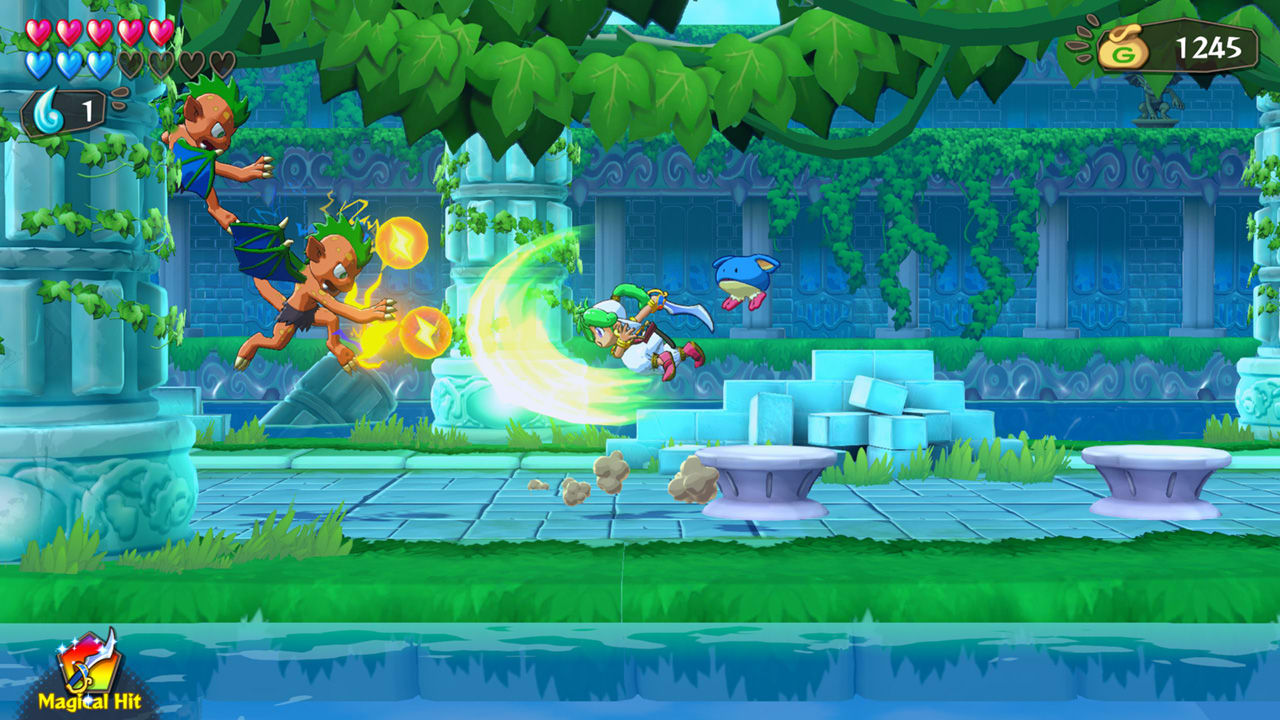 While Wonder Boy: Asha in Monster World‘s visuals are a night-and-day difference from the original’s, there’s still an old-school feel about them. They’re modern, but not overtly so, yet the game’s clean animation is always a joy to look at. Asha’s a pleasure to control, too. Inputs are responsive, and whether you’re jumping by yourself or using Pepelogoo to glide a greater distance, you always feel in control of where you end up.

Whether or not you’ve played the original, Wonder Boy: Asha in Monster World is an adventure worth going on. Its gameplay might be old-fashioned, but it’s just as engaging as ever, offering a nice little distraction from the latest AAA blockbuster. Are better side-scrolling adventure games out there? Absolutely. But that doesn’t make this any less worth your time.

This review of Wonder Boy: Asha in Monster World is based on the PS4 version (played on PS5) via a code provided by the publisher. It’s available on PS4, Switch and PC. 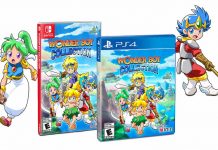 There’s a New Wonder Boy Game in the Works