There’s every chance that you won’t have heard of Megaton Rainfall, but this independent Spanish title is the closest you’ll get to being Superman without being born on Krypton. Played in first person, you fly across forests and deserts, plunge into oceans and zoom to other planets at a startling, dizzying speed; fast enough to really make you feel like the Man of Steel.

Your mission in Megaton Rainfall is to protect a planet under attack, using energy blasts to destroy missiles that are raining down. This part is easy, but your success or failure is based on how many lives are lost. You may be basically invulnerable but the same can’t be said of those tiny citizens far below. And if you really want to get lost in the fantasy offered by this superhero game, you can even play in VR.

Read our review of Megaton Rainfall 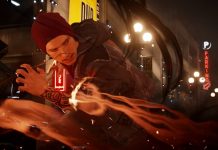