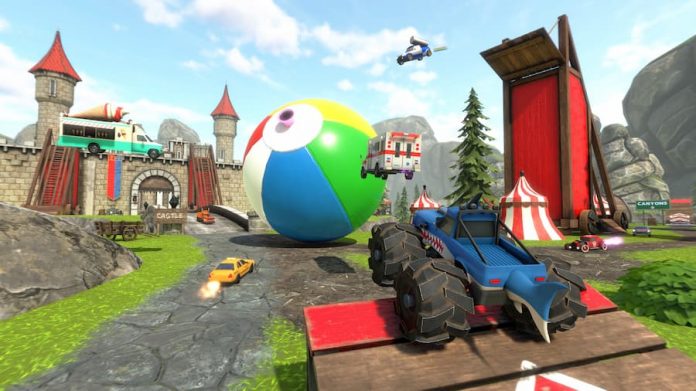 There’s only one thing that Crash Drive 3 cares about: that those who play it have a lot of fun.

From developer M2H, Crash Drive 3 is essentially a sandbox of vehicular-based mayhem. Whether you’re playing by yourself or with friends, you’ll find yourself in a car, free to drive around an environment at your will. Your surroundings are packed with obstacles, ramps, loop-the-loops and more, poised for you to perform stunts, drive fast, and most of all, have fun.

There are, of course, challenges and events to engage with in Crash Drive 3. A lot of them, in fact. You’ll only get 30 seconds after an event before the game decides to throw another one at you. There’s a good range available: checkpoint races, stunt challenges, coin collecting, cops and robbers, ‘king of the hill’ type events, and even more obscure games like driving into a giant beach ball until it pops. If you’re playing with real people, you’ll all be vying against each other for the high score. If you’re playing solo, you’ll be set a goal time or score to work towards.

What’s great about Crash Drive 3 is how seamless its single player vs multiplayer gameplay is. A friend can drop into your game at any time, immediately changing events to pit you against each other. It’s the type of game where you can be playing together but still be doing your own thing in between events. There’s even cross-play support, too, so you don’t even need to be playing on the same type of system to buddy up. It’s a nice touch.

Outside of events, there’s plenty to do on each of Crash Drive 3‘s multiple areas. Before you can advance to a different map, you’ll need to earn the right to unlock another. That means jumping through eight ‘green rings’ dotted around the current level, and earning enough money to open the gate. Money is earned by taking part in and winning events, and you can also find bonus crates dotted around the environment. The trouble is, if you’re focused on finding those green rings, the rate at which new events start can be distracting. You can choose to ignore them, but the event will still play out. It would have been better if players had more control over these; pressing a button to choose whether or not to start one, or to skip one altogether. 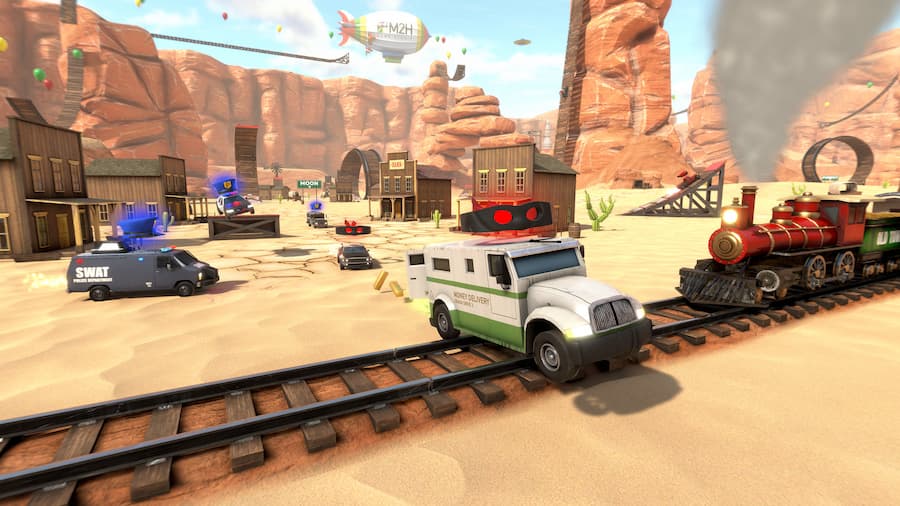 It does at least mean you’re never given chance to get bored in Crash Drive 3; it practically bombards you with things to do, at such a pace that you can barely think about anything else. But having a little more control over the pace of that gameplay would have been a welcome choice.

As fun as driving around Crash Drive 3‘s environments are, it’s a game that leaves a lot to be desired in terms of technical prowess. Its visuals are simple but serviceable, and the cars control fine for the most part, but there are a lot of elements here that could do with refining. The camera, for instance, is awful, giving you no control over your viewpoint. Reverse your car and the camera will rotate 180 degrees, allowing you to see the front of your vehicle but giving you zero control to pan around. When you’re reversing specifically to line up with a ramp, for example, it’s very frustrating. 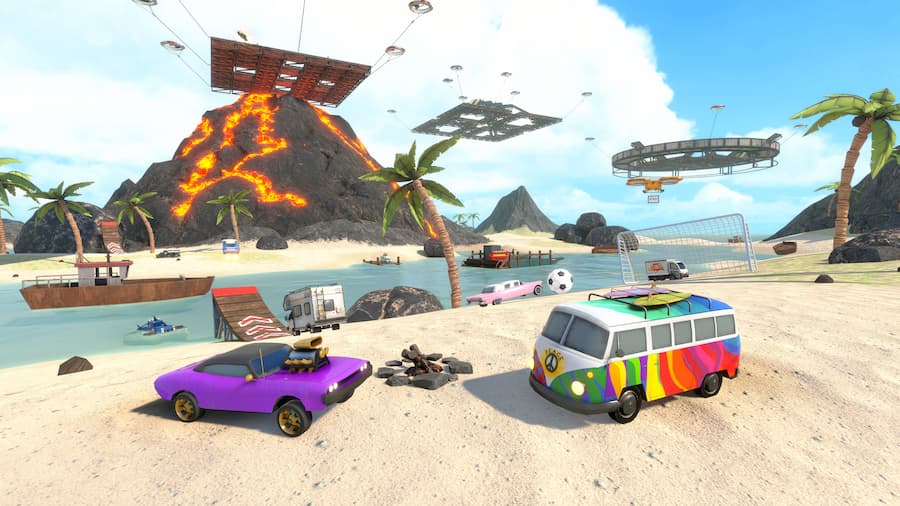 It’s also easy to get stuck in certain parts of the environment. A ‘snow’ level features a large frozen lake, which has cracked in some places. You’ll likely find yourself getting stuck in these cracks, and with no way to reset the position of your vehicle, you’ll either have to drive and reverse over and over again, hoping for the best, or use your in-game menu to take you to the garage, which will effectively reset your car once you go back into the game.

As unpolished as it may be, though, there’s no denying that Crash Drive 3 is entertaining. It doesn’t try to be the best racing game or the best stunt-driving game, but it is a fun sandbox of exploration, competition and vehicular mayhem. If you’ve got a friend or two to join in with, it’s a perfectly adequate way to while away some hours.

This review of Crash Drive 3 is based on the PS5 version, via a code provided by the publisher. It’s available on PS4, PS5, Xbox One, Xbox series X, Switch and PC. 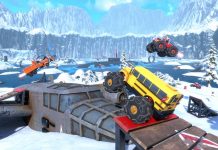 Crash Drive 3 Races onto PC, Consoles and Mobile This July