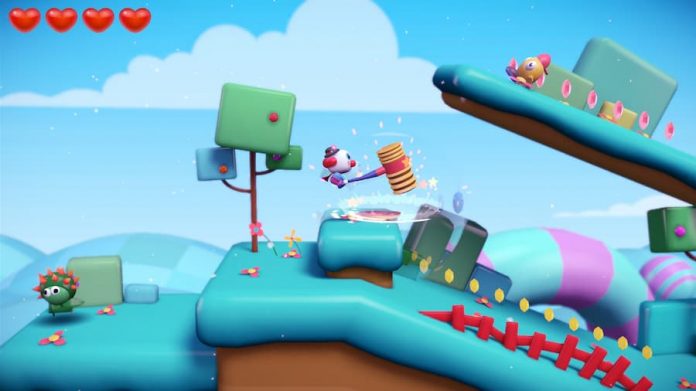 Clowns get a bad rep. Ayo the Clown wants to change that.

Despite his white-painted face and red tufts of hair, this little platforming hero is about as far away from Pennywise as you can get. He doesn’t care to terrorise children, and the only thing he’s using his balloon for is to float up to higher platforms. In fact, he’s only interested in reuniting with his dog – and maybe helping out a few people along the way.

As far as side-scrolling platformers go, Ayo the Clown doesn’t try to break the mould in any way. It uses tried-and-tested gameplay to create a solidly entertaining – and surprisingly beautiful – platformer that fans of the genre of any age are likely to enjoy. Levels are rather sprawling, and branching paths mean that exploration to uncover secrets and collectibles is worth pursuing.

But at its most basic, Ayo the Clown will simply see you travel from left to right, jumping over obstacles, avoiding (or killing) enemies in order to reach your goal. Sometimes you’ll pick up a weapon – a toy gun or a comedically oversized mallet – to dispatch your enemies with. Other times, a good old-fashioned jump on the noggin will send them flying.

There are several worlds in the game, each with their own theme. Whichever one you’re in, you’ll find it to be gorgeously designed. Bright colours are used to great effect and every level is injected with more than its fair share of personality. Flowers will smile at you as you run past, gingerbread men act as obstacles, and even the enemies that are out to kill you will undoubtedly make you smile before squashing them flat.

If side-scrolling platformers are your go-to happy place, then I doubt you’ll be disappointed with Ayo the Clown. However you feel about clowns, let this little dude change your mind. It’s available now on PC and Switch, priced at £15/$20.