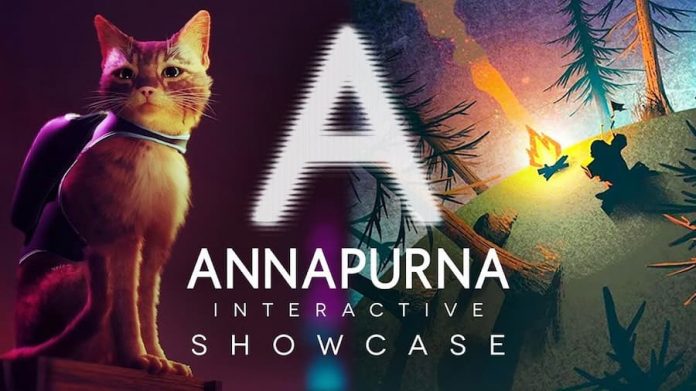 Wondering what was on show at yesterday’s Annapurna Interactive Showcase? We’ve got you covered.

Maybe you missed the showcase by accident, maybe you were busy or maybe it was because you didn’t feel like dealing with that one idiot who kept spamming ​MARADONA MARADONA MARADONA into the chatbox. Either way, we’ll fill you in on what you missed.

The showcase was a mixture of new games and updates on titles we already knew were on the way. We learnt about two new games, Storyteller and A Memoir Blue, and we got more information about five upcoming games and one expansion pack. The showcase also revealed additional platforms for several of Annapurna Interactive’s titles, gave us hints of things to come and we got a handful of new trailers.

That might seem like a lot to take in but, don’t worry, here’s everything you need to know.

We already knew The Artful Escape was on the way, but Annapurna revealed the release date for this dimension-hopping psychedelic guitar adventure and the trailer only made us want it more. It’ll rock its way onto the Xbox and PC this September 9th and its voice cast will include Michael Johnston, Caroline Kinley, Lena Headey, Jason Schwartzman, Mark Strong and Carl Weathers.

Yes, that’s Carl “World’s Most Powerful Handshake” Weathers, though Game of Thrones is so embedded in our brains, even the bad season, we’re worried we’ll also have a problem hearing Lena Headey as anyone apart from Cersei Lannister. You can wishlist The Artful Escape on Steam here.

Another game we knew that was on the way, Neon White is about blasting your way through heaven, dispatching demons, albeit in a less bloody manner than in Doom Eternal. We got a new gameplay trailer which, apart from showing off some acrobatic first-person shooting also gave us a look at some of Neon White’s oddball characters.

There’s a strong focus on replaying levels, beating your own and others records, but what really caught our eye was the inclusion of a token from another Annapurna title, Tattletail. We’re hoping against hope that Mama Tattletail is an unlockable, playable character. Neon White is coming to Nintendo Switch and PC (via Steam) this winter.

An all new game, A Memoir Blue is a narrative focused-tale about the relationship between a mother and her daughter which, going by the trailer, looks to be very strained. What’s particularly striking is how it has realistic characters and cartoon-style ones sharing the screen; we’re guessing the cartoony characters represent your protagonist’s memories.

A Memoir Blue doesn’t have a release date yet but it’ll be coming to Xbox Series X|S, Xbox One (hitting Xbox Game Pass day one), PlayStation 4, PlayStation 5, PC (via Steam), Nintendo Switch and iOS.

Storyteller is another all-new game, a puzzle game which sees you recreating familiar stories by dragging characters into comic book style panels. We had to grin at the trailer, which saw the player “solving” Dracula using some utterly adorable characters. Annapurna say that “players must use their wits to retell iconic tales, or find something new.”

We’re more interested in the “something new”; what if, for example, we wanted Dracula to snap Keanu Reeves’ neck and head off into eternity with Mina? Storyteller is set to land on PC and Nintendo Switch and, though there’s no solid release date other than “coming soon”, you can get a playable demo from Steam right now.

Solar Ash is a game we were aware was in the works, having previously been shown off by Sony, but now we know when it’s being released. It resembles nothing so much as a mash-up of Hyper Light Drifter, developer Heart Machine’s previous title, and Strider, with a dash of Jet Set Radio thrown in.

It sees you skating, slashing and swinging your way across wealth of brightly coloured landscapes, including sunken cities, lava zones and more (no word on there being an ice level). It’ll be arriving on PC (via the Epic Games Store) and PlayStation this October 21st.

An oddball FPS with a healthy dose of sneaking, Skin Deep doesn’t have a release date but, thanks to last night’s showcase, we know what to expect when it does see the light of day.

We got a new trailer showing off the ludicrous shenanigans you can get up to, such as hurling your gun to open an airlock, sucking an enemy out into space (we’re guessing Health and Safety would have a few worlds to say about that). Skin Deep is coming to Steam, and you can wishlist it here, but there’s no word on when, or if it’ll be gracing any other platforms.

Actually, you know what? We’ve changed our minds, forget about Storyteller and reverse-Dracula, this is the game want to play right now. Unfortunately, we’re going to have to wait till “Early 2022” but we’re thoroughly hyped for being able to play as a cat, roaming a city of humanoid machines.

Stray’s protagonist is a proper cat, mind you, none of this anthropomorphic nonsense; you get to clamber onto bins, make impossible jumps, claw sofas, solve puzzles and much more. Your task is to escape the city and reunited moggy with their family though you’re not alone; you encounter a robotic drone that will lend you a hand and almost certainly won’t turn out to be secretly evil.

You can wishlist Stray on Steam right now; there’s no news on whether it’ll make to other platforms but, given Annapurna’s publishing history we’d expect it to make its way to the PlayStation or Xbox eventually.

Outer Wilds: Echoes of the Eye

We’ve known for a couple of months that Outer Wilds was getting an expansion pack, ever since its existence was leaked through Steam records. But now it’s been confirmed and it has a title, Outer Wilds: Echoes of the Eye and an official September release date.

What’s curious about Echoes of the Eye, apart from how cryptic the trailer is, is that Outer Wilds doesn’t seem like it’d lend itself to DLC. This is set to be the only DLC the it receives but since it’s an essentially an open-world space exploration game, with a very clear ending, how is this going to work? Are we going to see a new planet pop into the game?

We’ll find out when Outer Wilds: Echoes of the Eye arrives on PlayStation 4, Xbox One and PC this September 28th.

Aside from these specific games, Annapurna also clarified the platforms that several other titles will be arriving on:

Our picks are Storyteller and Stray but there’s plenty to look forward to regardless of your tastes. If you want to watch Annapurna Interactive’s Showcase from beginning to end you can catch the full 34 minute show here.