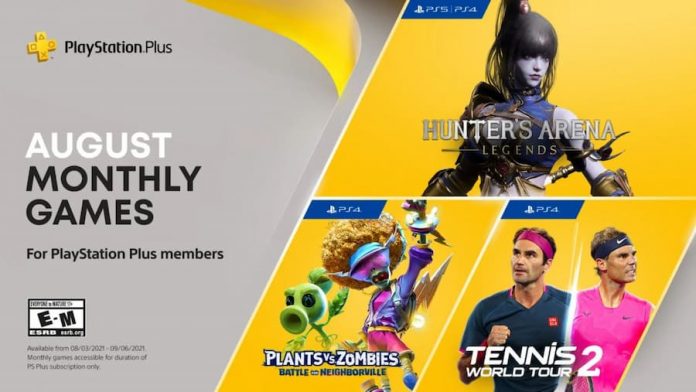 PS Plus subscribers, you have three new games to look forward to next week.

The PlayStation Blog has just revealed the PlayStation Plus games line-up for August. From Tuesday 3rd August, subscribers will be able to claim Hunter’s Arena: Legends, Plants vs Zombies: Battle for Neighborville and Tennis World Tour 2.

Hunter’s Arena: Legends is a new game launching straight into PS Plus, and both the PS4 and PS5 versions of the game will be up for grabs. It’s a 30-player PvP and PvE battle royale taking place in an ancient age. You’ll battle against humans as well as ferocious demons that pose a threat to the world.

Plants vs. Zombies: Battle for Neighborville first released in 2019, and we thought very highly of it at the time, reviewing it with an ‘outstanding’ 9/10. It’s an extension to the popular Garden Warfare series, but adds in plenty of new content, and a lot more single-player content than its predecessors. It’s colourful, vibrant and a lot of fun.

Finally, for tennis fans out there, Tennis World Tour 2 is one for you. Released in September 2020, we originally weren’t too enamoured with the game. But after several patches, it’s now a solid tennis game. Despite having a PS5 release earlier this year though, only the PS4 version is included in PS Plus.

If you’ve not claimed them yet, you still have time to grab July’s games. You’ve got until Monday 2nd August to claim Call of Duty: Black Ops 4, WWE 2K Battlegrounds, A Plague Tale: Innocence and Virtua Fighter 5 Ultimate Showdown.