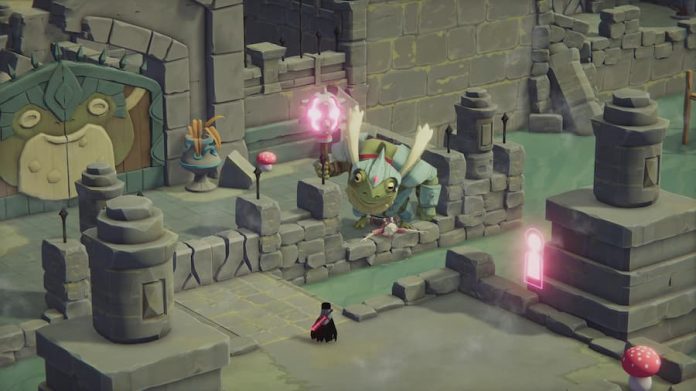 After defeating the Witch of Urns, the Frog King is the next menacing adversary you come across in Death’s Door.

In the first stage of the fight against the Frog King in Death’s Door, simply wait until he crashes down to attack, then get behind him and attack the strings of his armour. Do it enough times and his armour will come off, starting the second stage of the fight.

When the Frog King emerges on the right hand side of the platform, he’ll tilt it towards himself while sucking you in. Keep running in the opposite direction, watching out for floor tiles coming loose and being sucked away by King Frog. Once he’s done he’ll jump in to attack you – avoid the impact, then get in close and wail on him with your weapon of choice. When he jumps away to the left, quickly shoot the weapon on his back with an arrow to send out a wave that replenishes the platforms he sucked away.

From left side, the Frog King has a different attack. He’ll fire bombs onto the platform, destroying any tiles that they hit. Avoid the bombs by running from the far end – after about six of them he’ll jump in to attack. Again, avoid the impact where he lands, then get in close and attack him with your weapon. When he jumps away to the right, fire an arrow at the weapon on his back again to replenish any floor tiles that were destroyed. Rinse and repeat to defeat him.

Overall, the Frog King isn’t that challenging when you know what to do. One more boss down.