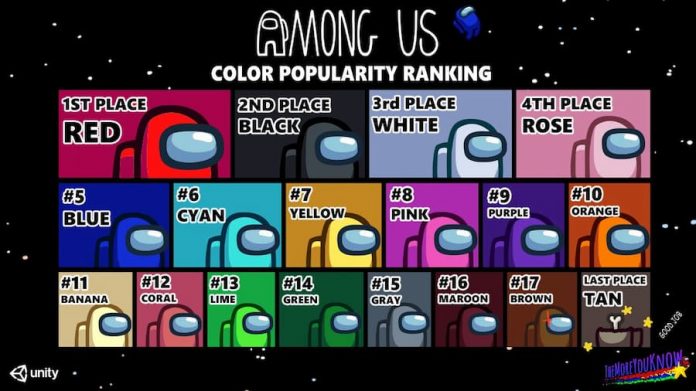 InnerSloth, creators of Among Us, have revealed the game’s most (and least) popular character colours.

The multiplayer murder-em-up challenges one or more Impostor to slaughter their fellow Crewmates who are, in turn, trying to complete their tasks and uncover the Impostor. The game assigns you a random character colour but you can also choose your own, provided someone else hasn’t already taken that colour.

Now, InnerSloth’s have released an infographic that reveals which colours are most popular. Red is the number one colour, followed by black, the gothiest of all colours. Tan, on the other hand, is the least popular for, for reasons we’ve yet to fathom.

Actually, we’re not entirely sure why red is the most popular colour in a game where, as the killer at least, you try not to stand out. But we can well believe this as, having been assigned red, we’ve had people bug us to change colour so they can be red. We’ve always, always said no.

Now, if only InnerSloth could tell us which colour Impostors have won the most.