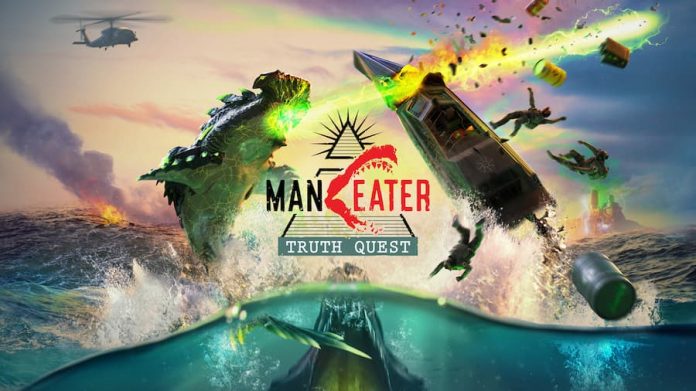 Maneater is back, and she’s bringing the truth with her. Apparently.

Maneater is the name of this open-world shark-em-up, not necessarily its protagonist, but it’s what we’re sticking with. And now, thanks to the game’s upcoming DLC she’s getting a whole bunch of new people to much her way through.

Truth Quest, arriving the end of August, grants you access to a new zone, a secret installation that, in a parody of conspiracy style TV shows, has been up to no good. Maneater will also get a bunch of new upgrades including, if the DLC’s art is to be believed, the ability to fire lasers from her mouth.

That said, that ability isn’t featured in the DLC’s new trailer so we’re hoping it’s actually in there and that developers Tripwire Interactive aren’t pulling a fast one. We’re also hoping that Maneater: Truth Quest has more meat on its bones than the main game. Our chief problem with the original was that the “story missions” were actually the same general activities on loop and if Truth Quest fixes that we’ll be happy.

Maneater: Truth Quest will arrive this August 31st, swimming onto the PC, Xbox One, Xbox Series S/X, PlayStation 4 and PlayStation 5. Maneater is also available on the Nintendo Switch but there’s no news of a Switch release date for the DLC.