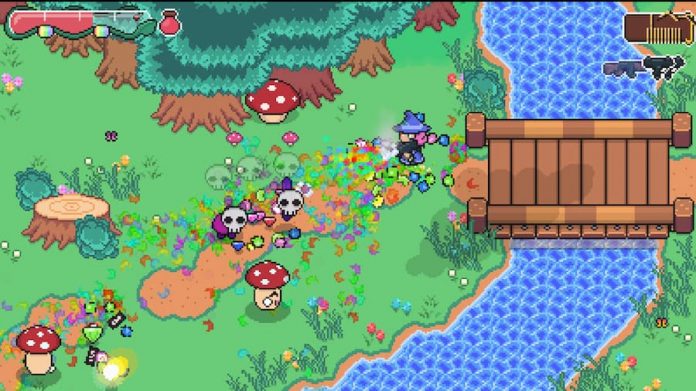 Have you ever played The Legend of Zelda: A Link to the Past and thought, “this game would be better if it was a bullet-hell shooter?”

Well, no, I haven’t either. But I have a feeling that someone at Rainbite, the developer of Trigger Witch, might have had a similar train of thought at some point. Out today on PlayStation, Xbox and Switch, Trigger Witch tells the story of Colette, a young witch who has just passed a test to enrol in The Stock, the school for ‘Witchcraft and Triggery’. Given a gun for the first time, she embarks on a journey filled with bullets, enemies and adventure.

Set in a top-down pixelated world, it’s hard not to draw comparisons between A Link to the Past and Trigger Witch. The visuals are very similar; this is a game that wears its inspirations on its sleeve. And that’s no bad thing. Exploring Trigger Witch‘s world is a delight, especially as a fan of adventure games from the 90s. Of course, there’s one big difference here: you’re equipped with a a huge-ass gun, and can down your enemies with an endless spray of bullets. Take that, Link.

It’s a combination of genres that work very well. Exploring Trigger Witch‘s environments is fun, and you’ll come across various puzzles to complete in order to get from one area to another. But along the way you’ll also encounter groups of enemies, with fast-paced music kicking in once they’ve caught sight of you. Aiming with your right stick sets your sights at them, and pulling the right trigger will see your ammo let loose. As you play, you’ll acquire new guns and upgrade your current stock, and can switch between them at will. 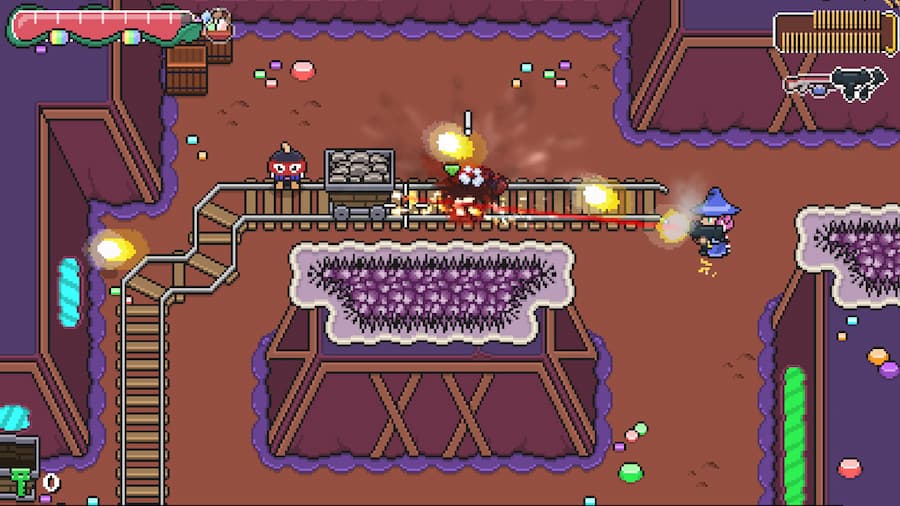 In a nice touch, you don’t have to worry about running out of ammo. Every gun automatically reloads, though once you’ve run through a clip you’ll automatically switch back to your trusty pistol until it’s ready to use again. It’s seamless, and means you’re never without firepower – even if your pistol might not do as much damage as the shotgun or grenade launcher you were previously using.

I’ve only scratched the surface of Trigger Witch so far, but I’m very much enjoying the ride. A beautiful blend of old-school adventure and twin-stick bullet hell, there really is something for everyone. Well, unless you’re not a fan of blood splatter. Because there’s a lot of it here.