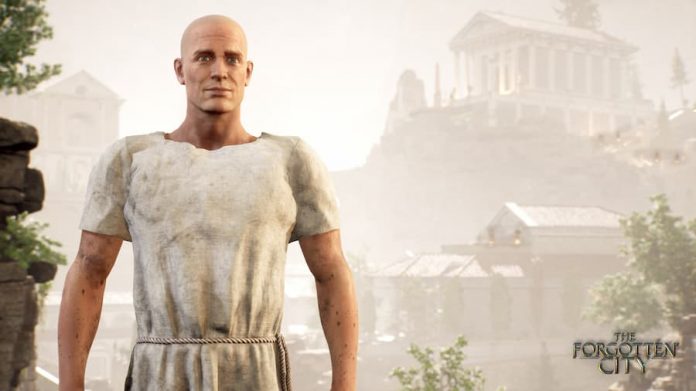 The Golden Rule; the ethical tenet that basically equates to “treat others how you’d like to be treated by them.” Play The Forgotten City, and you’ll become acquainted with it.

You see, in this time-travelling adventure that has you travelling some 2,000 years into the past via a mysterious portal, breaking The Golden Rule has grave consequences. Finding yourself in a cursed Roman city, occupied by just a small number of people, if just one of them commits a sin then the whole community is punished. And by punished, I mean turned into gold statues. It just so happens that you’ve been summoned to the city in order to prevent such an occurrence from happening; if you fail, returning to the portal from which you emerged will simply turn back time, giving you another chance at stopping a sin from happening.

Needless to say, the setup for The Forgotten City is an interesting and highly original one. Emerging from the portal, fresh to the strange but picturesque Roman city presented to you, chances are you’ll go along with the first person you meet to have an audience with Sentius, the Magistrate. He seems like a fairly respectable fellow and, after getting you up to speed, he gives you the task of identifying who’s set to break The Golden Rule in order to prevent the catastrophe from besieging the city. You’re independent, you see, and have a fresh set of eyes and ears.

It’s when you begin your investigation, however, by talking to the various inhabitants of the city, that you’ll start to wonder if everything is quite as it seems. It probably also won’t be long until The Golden Rule is broken, prompting you to run for your life back to the portal in order to rewind time and have another crack at solving the conundrum. The first time The Golden Rule is broken you’ll also witness just how the inhabitants of the city are turned to gold, which will raise even more questions. And then there’s the fact that someone keeps whispering to you. It’s all very unusual. 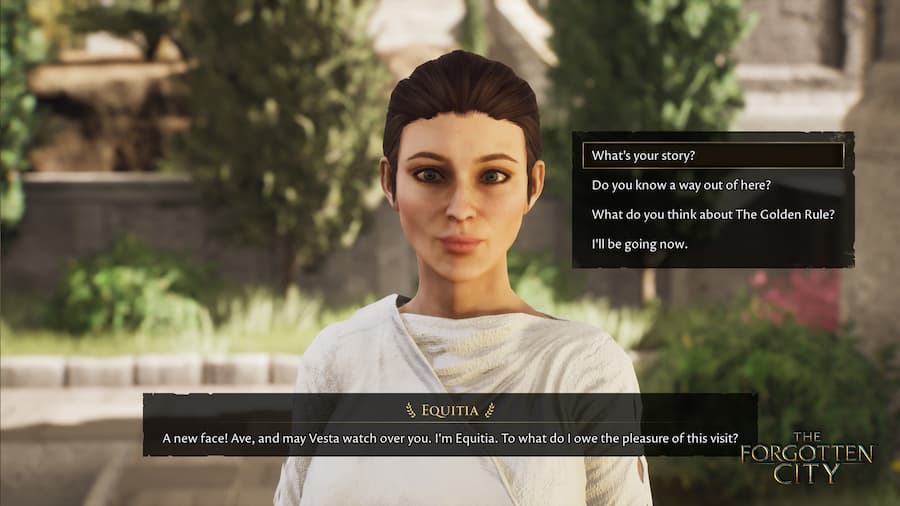 To say any more about The Forgotten City‘s story would ruin it for you, but it’s safe to say that it’s captivating, and drives you to reach the game’s true ending. Chances are you might encounter one or two of the game’s other three endings as well, or maybe them all. Basically, the more you put into The Forgotten City, the more you get out of it. Simply think of yourself and you’ll reach an ending fairly quickly, but it won’t be a happy one. Put all your efforts into saving everybody, and you’ll find yourself having to put in much more legwork, but it will be worth it in the end.

In the early hours of The Forgotten City you’ll find yourself getting acquainted with each of the city’s inhabitants, finding out more about them as you try to work out who is most likely to break The Golden Rule. You’ll also discover that many of them are troubled, and will be given the option of attempting to solve their problems. Vergil, for example, has been receiving anonymous threats, and worries that they might escalate to something more. If you can work out who’s got an issue with him, maybe you can put a stop to the animosity? Ultimately, ensuring that the city remains safe means solving everyone’s issues, right? 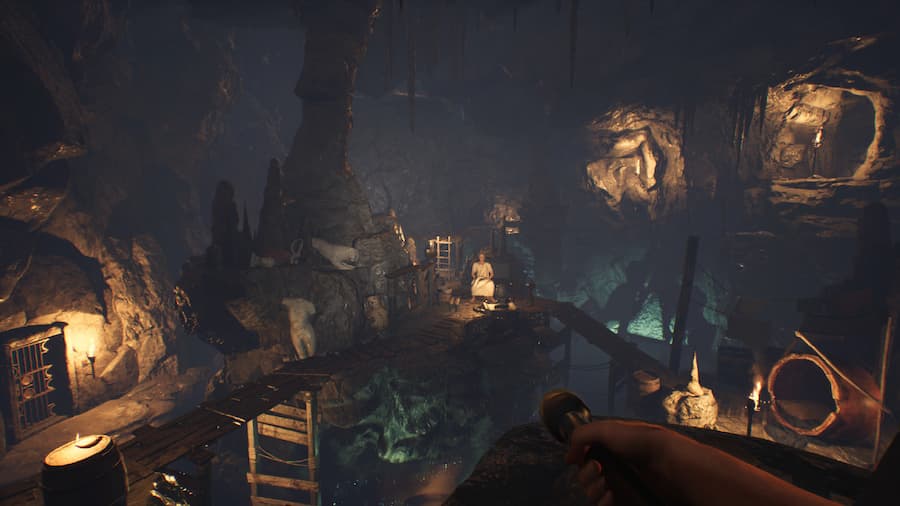 As you’ve probably already surmised, much of your time in The Forgotten City is simply spent talking to people. There are some action elements though. Follow one lead and you’ll acquire a bow that can turn people, and certain objects, into gold. It will come in particularly handy when exploring certain parts of the city, such as the caverns that run under it. Conflict doesn’t have to be resolved via violence, however; reasoning with those who don’t see eye-to-eye with you is possible, and is generally more desirable. For one, it means you won’t be breaking The Golden Rule.

While you’re free to roam the city as you please, you’ll find that it isn’t particularly big. The nature of the game means you won’t mind so much though, and you’ll also appreciate the bits of rope strung from various points that you can use as ziplines. While the city itself looks absolutely stunning, character models are a bit of a mixed bag. Stellar voice acting lessens the impact though, as well as a pretty enjoyable soundtrack. It might only take you six hours or so to fully complete the game and see all of its endings, but during that time you’ll have grown fond of at least a few characters, and perhaps even the city itself. 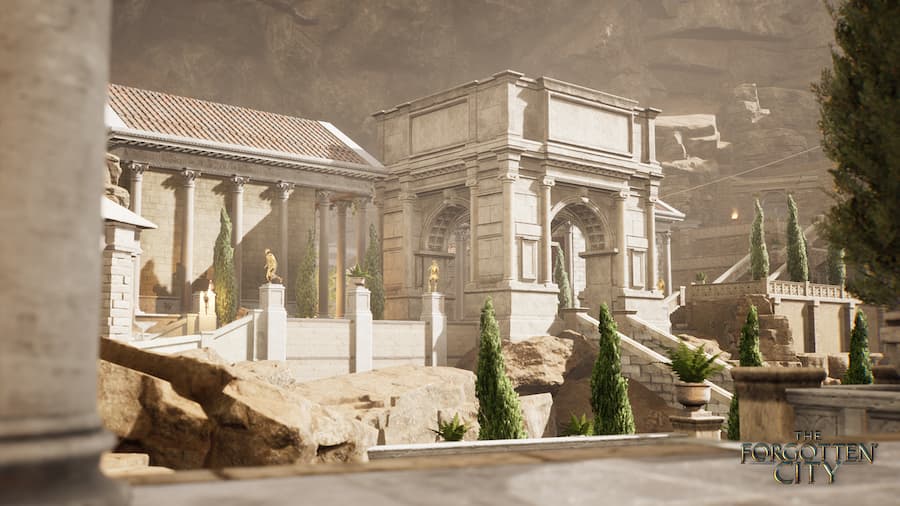 If anything, it’s The Forgotten City‘s brevity that disappointed me the most about the game. Drawn in by its interesting premise, its philosophical themes and mix of investigation and adventure soon gripped me, and not long after my journey was over. But this is an indie game after all, at a price that’s just a fraction of what a big blockbuster retails for these days. I enjoyed playing it more than some of those blockbusters though, and it’s free of unnecessary bloat. Hell, after following up on leads and completing them, you can even tell Galerius, the man who greets you at the start of each loop, to carry out a list of actions so you don’t have to do them again. It’s a small touch, but one that’s very welcome indeed.

Based on a mod for The Elder Scrolls V: Skyrim, it’s great that The Forgotten City has been expanded upon and given a chance to truly shine as a standalone product. The writing is stellar, and the whole affair is so unique and interesting that you can’t help but get sucked in, attempting to find a way to put an end to The Golden Rule once and for all. Not all of the endings available are particularly gratifying, but follow The Forgotten City through to its true ending and you’ll be left with an experience that you won’t soon forget.

This review of The Forgotten City is based on the PS5 version, with a code provided by the game’s publisher. It’s available on PS4, PS5, Xbox One, Xbox Series X/S ands PC.

Pre-order The Forgotten City on Amazon 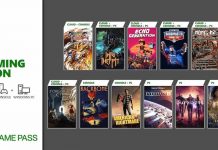 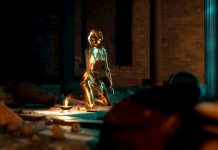