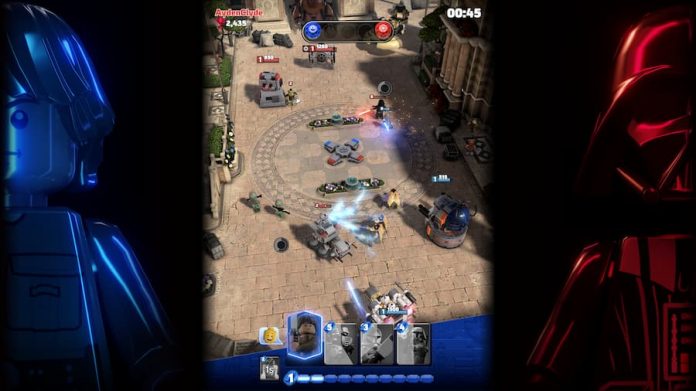 Announced today by Warner Bros. Games, LEGO Star Wars Battles is coming exclusively to Apple Arcade on iPhones and iPad. It’s an action strategy game which sees a range of popular LEGO Star Wars characters battle it out and protect their bases from incoming threats.

It’s been developed by TT Games Brighton and published by Warner Bros., and will be available on iOS ‘soon’. An exact release date has yet to be announced, but new games tend to drop onto Apple Arcade on Fridays, so keep an eye out if you’re an existing member.

LEGO Star Wars Battles allows players to engage in one-on-one battles against other players or the CPU, taking control of a range of well-known units from across the light and dark side of the Force. Each character has their own abilities, and will fight it out against the opponent, protecting their base from incoming invasion. Defeat your opponent’s base before they destroy yours to claim victory.

Expect to see plenty of familiar characters, vehicles and locations, wonderfully recreated in LEGO here. It spans all Star Wars eras, so you’ll find references to the Skywalker saga, The Clone Wars, and Rogue One here. If you enjoy strategic battle games like Clash Royale and Gears Pop, it looks like LEGO Star Wars Battles will be worth sinking some time into. Especially if, like us, you’re a big fan of anything LEGO Star Wars.

To play LEGO Star Wars Battles, you need a subscription to Apple Arcade. It’s available for a monthly fee of $4.99, or as part of an Apple One membership.