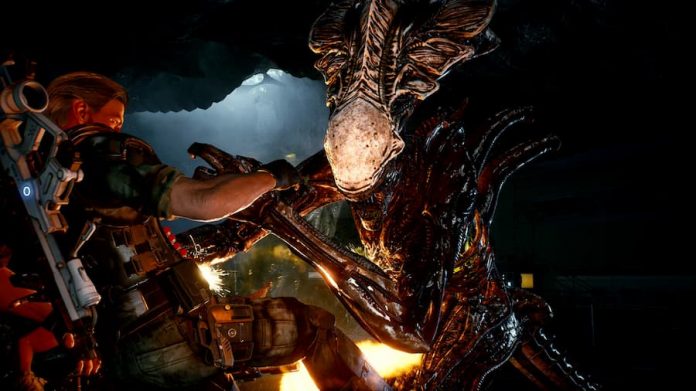 The Alien franchise has had a patchy history with videogames, but thankfully Aliens: Fireteam Elite is one of the better titles.

Set over 20 years after the original Alien trilogy, Aliens: Fireteam Elite is a third-person co-op shooter that presents four short campaigns. Each one is split into three missions and has its own little story to tell, and overall they form a larger narrative that isn’t likely to keep you gripped to your seat but is a nice addition nonetheless. In fact, drawing on the entire Alien film franchise – including Prometheus and Alien: Covenant – there are plenty of details and revelations here for ardent Alien fans to go through with a fine-tooth comb.

Ultimately though, the gameplay is where it’s at. What might come as a surprise to some is that while Aliens: Fireteam Elite is obviously meant to be played with others, thanks to its three-person fireteam set-up it’s actually rather serviceable as a single-player game. There’s matchmaking if you don’t have friends available to play with, but choose to go it alone and the remaining spaces of your fireteam with be filled with synthetics, or robots to anyone unfamiliar with the term. They’re pretty capable, too, at least on the easier two of the game’s three initial difficulty settings. And playing alone doesn’t do anything to hamper your progression.

Each of the game’s four campaigns finds your intrepid marine fireteam heading into a fairly unique environment, though the scenery will all be very familiar to Alien fans. From the UAS Endeavour, players will visit the Katanga mining refinery, a strange alien craft, and even venture deep into a xenomorph hive. And along the way, they’ll encounter a surprising range of hostiles to keep them on their toes. Aside from the presence of multiple types of xenomorphs, expect to stand off against an army of synthetics, and more. 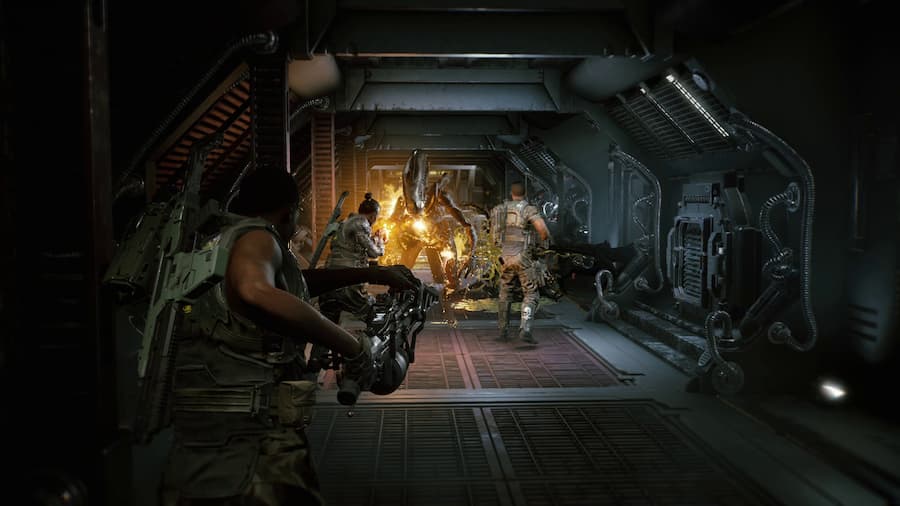 There are four marine classes to choose from at the outset, with a fifth unlocked via completing all four campaigns. The class you choose largely prohibits which weapons you can equip, and also determines which special skills you have available. Pick the gunner, for example, and you’ll find that they have a passive ability that allows them to do more damage as they keep scoring hits on targets, as well as two active abilities; one that enables them to bolster the team’s fire rate for a short while, and a grenade.

Switch over to the unlockable Recon class and you’ll find their skills are much more team-focused, making enemies more visible while increasing the damage done to them and allowing the team to heal upon scoring a kill. Needless to say, players will all find a class that suits them, and when playing with others the team composition will play an important factor in success. And of course, as players spend time with each class, they level them up and unlock new perks and modifiers to make them even more formidable. 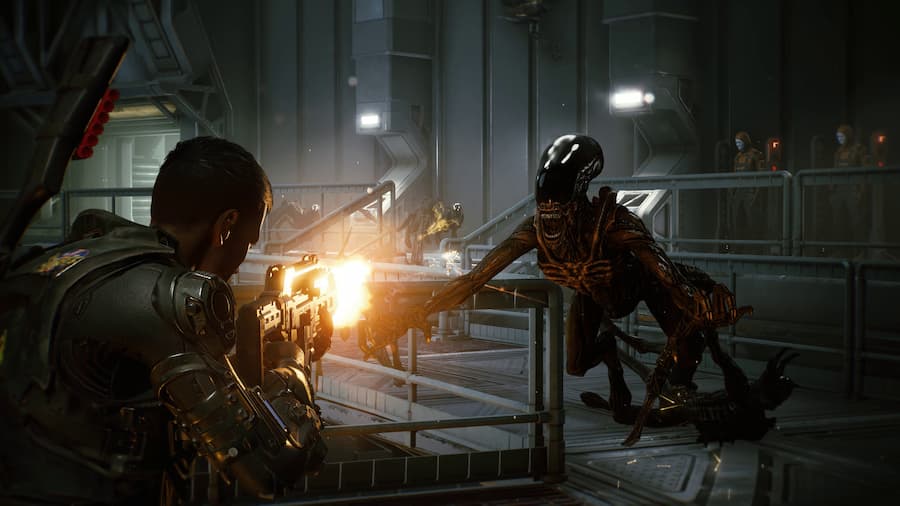 What’s particularly cool about character development in Aliens: Fireteam Elite, however, is that once unlocked, many perks and modifiers can be used by all classes. So, if you spend a lot of time as a Gunner but then decide to switch to being a Demolisher, you could equip some Gunner-centric perks you’ve previously unlocked that boost your abilities with a rifle. Not only does it make progression feel more worthwhile, but it also helps you when fine-tuning your marine to your tastes.

Thankfully the unique scenery in each campaign, and the fairly unique selection of enemies, means that Aliens: Fireteam Elite still manages to hold your attention throughout. There’s a challenge card system to make replaying missions more interesting, too. Two currencies are earned as you play through the game: one which can be used to buy new weapons, attachments and perks, and another that can be used to buy cosmetic items and challenge card packs.

At the start of each mission you get the chance to play one of those cards, modifying some aspect of the gameplay while dangling a carrot at the end of the stick. A card might halve your fire rate while doubling your damage, for example, and if you manage to complete the mission under those conditions you’ll gain a small multiplier to your credits. Another might introduce a powerful xenomorph drone that will stalk you throughout the entirety of the mission. It’ll make completing the mission much tougher, but you earn considerable experience and credit boost if you manage to do so. 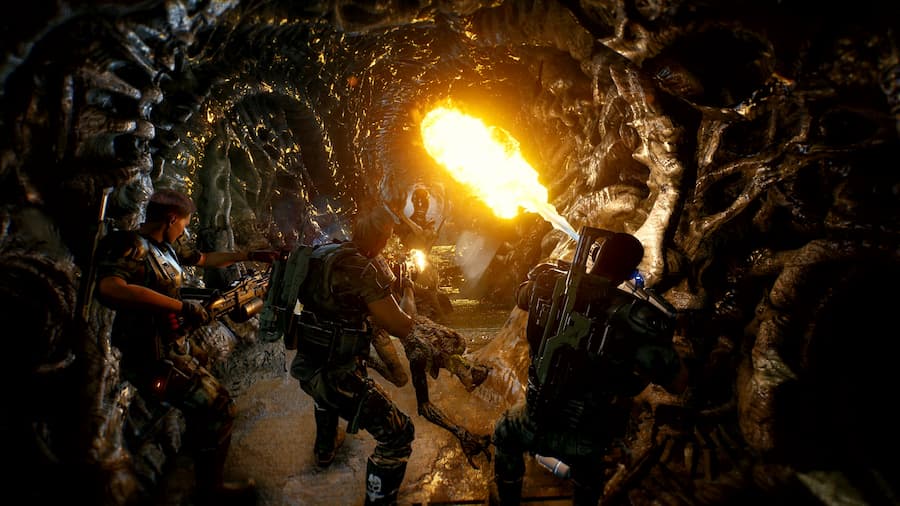 Other aspects of Aliens: Fireteam Elite to consider are that upon completing the game’s four campaigns, a Horde mode becomes available. It’s pretty enjoyable, but there only seems to be one map available so far. Also, between missions you get to explore the UAS Endeavour, and by finding intel during missions members aboard will keen to talk to you in order to impart their knowledge. All dialogue is voiced, which is nice, but there’s no lip syncing. It’s little things like that that give the impression of a budget game. And to be honest it is a budget game, but the rest of the presentation is of such a high standard that it makes the lip-syncing stands out more.

Aliens: Fireteam Elite is a hugely entertaining co-op shooter, only brought down by the formulaic structure of its missions and the odd rough edge. Developer Cold Iron Studios is promising more free content in the future, however, and has the chance to turn the game into something rather special. With more horde maps, marine classes and perhaps a mission tweak here and there, we could imagine returning to Aliens: Fireteam Elite time and time again, long into the future. Right now though, while some team-based third-person shooter fans will have plenty of fun with it, it’s only really a must for Alien fans.

This review of Aliens: Fireteam Elite is based on the PS5 version, with code provided by the game’s publisher. It’s available on PS4, PS5, Xbox One, Xbox Series X and PC. 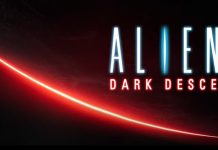