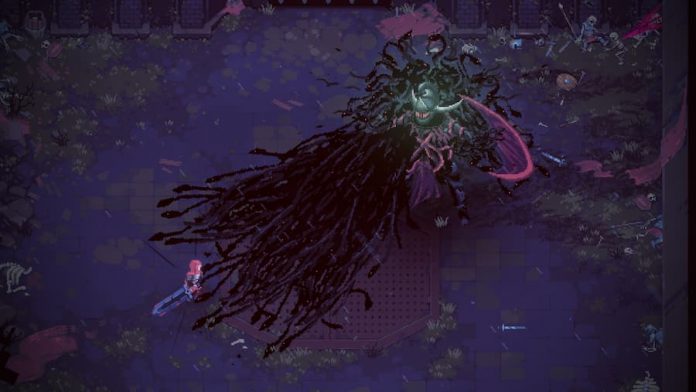 Take a game like Dark Souls and cut out all the tense bits of adventuring between the bosses. What you’re left with is Eldest Souls.

In a world in which humans have rebelled against the Old Gods, evil is afoot. Trapped inside the sacred walls of the Citadel, the Old Gods have unleashed desolation, and now humanity is on its last legs. Countless warriors have made a stand before you and failed, but maybe this time things will be different. Armed with a sword made of pure obsidian, there’s only one way to find out.

Arriving at the outskirts of the Citadel via a rickety wooden boat, Eldest Souls wastes no time putting you on edge with its haunting atmosphere. Alone in a location that feels eerily quiet and still, you quickly learn the basics while approaching your target. Quickly tapping the attack button instigates a flurry of weak hits, while holding it allows you to charge your attack, covering ground if needs be to get in range of your target. And then you have your evasive dash – your stamina allows you to perform up to three in quick succession, and they allow you to escape damage by travelling through most attacks.

There’s more to the combat of Eldest Souls, however, which you’ll quickly learn when you come up against the first of its bosses. Your charged attack, for example, also heals you when it connects, and you have a Bloodthirst gauge that allows you to perform a special attack when full. Overcome the first boss, and you’ll also gain a skill point, which can be placed in any one of three skill trees. That allows you to specialise somewhat, with each tree providing its own set of special skills and perks. 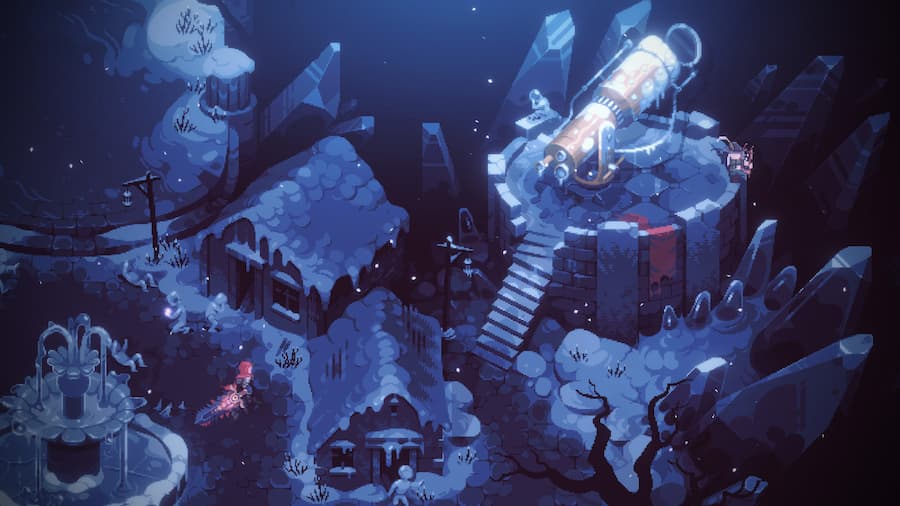 What’s really neat is that you can respec your character at any time for free. Once you’ve downed a few bosses it’s probably a good idea to do so, too, just to see which one of three playstyles available gels with you the most. Even more character customisation is afforded by energy-infused crystals acquired by defeating certain bosses. They can be used to bolster various abilities depending on where you equip them, or can even be used to provide you with a an additional ability.

Unless you’re some kind of god yourself, you’ll need to develop your character effectively in Eldest Souls because its bosses are brutally difficult. There are nine of them in all, each wonderfully unique, and of course, the further you progress into the game the more challenging they become. To make your encounters with them just that bit more eventful, many of them gain additional attacks once you’ve dealt a certain amount of damage, or have other nefarious tricks up their sleeves. Sometimes you might think you’re on the cusp of victory, only to have the rug swept from under your feet. 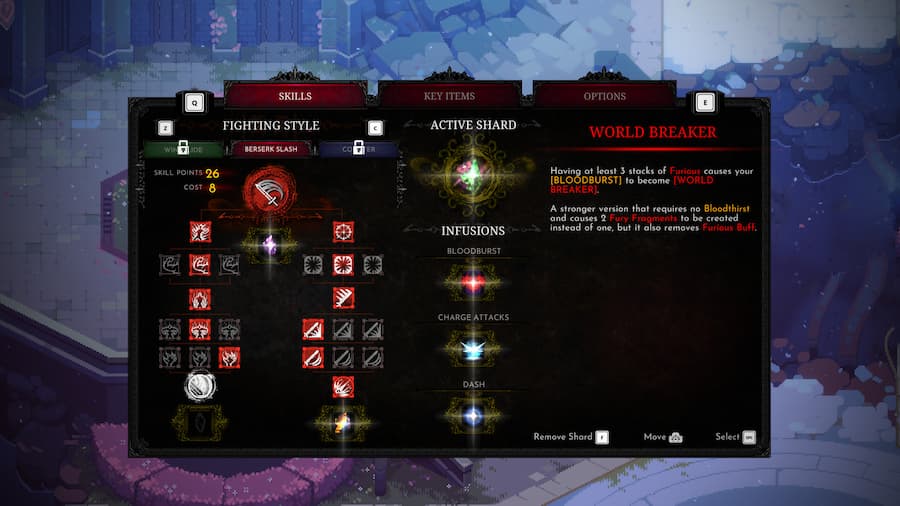 The key to success in Eldest Souls lies in knowing when to attack and how, when to keep a distance from your foe, and what attacks you can dash through. Thanks to the charged attack’s healing properties, sometimes it’s worth taking a bit of damage if it means you can get a number of hits in before before a another, more powerful attack is unleashed. The unique perks afforded to you by your chosen playstyle also need to be considered. If you’ve opted for the Counter playstyle, for example, then you’ll want to make use of the defensive stance it provides you, which nullifies an incoming attack then counters with one of your own.

Unfortunately though, luck also feels like it plays a major role in whether you emerge victorious or not. Each and every one of Eldest Souls‘ bosses has a wide variety of attacks that they can make use of, and some of them are much more fiendish than others. Sometimes you might also get unlucky and your foe will unleash a quick combination of attacks that, when combined, simply feels unfair. Success, then, can simply arise from facing off against a boss numerous times until it doesn’t make use of certain aspects of its arsenal.

Outside of the boss fights, there’s some light adventuring to be done. You’ll travel through numerous zones on your adventure, and will generally be able to choose in which order you take on multiple adversaries. You’ll not encounter any “standard” enemies in these adventure zones, though you may come across traps – some of which will one-hit-kill you. Thankfully death has no real repercussions; you’ll simply be respawned close to where you met your doom.

Those who search every nook and cranny and put in some legwork will be rewarded for their efforts. Items can be obtained, which when gifted to other characters you encounter may result in you gaining various perks or upgrades. There are multiple endings to achieve, too, depending on how you choose you use certain items. All in all, the bits of downtime between boss fights offer a welcome break from the action – it’s just a shame there isn’t more to do, really. 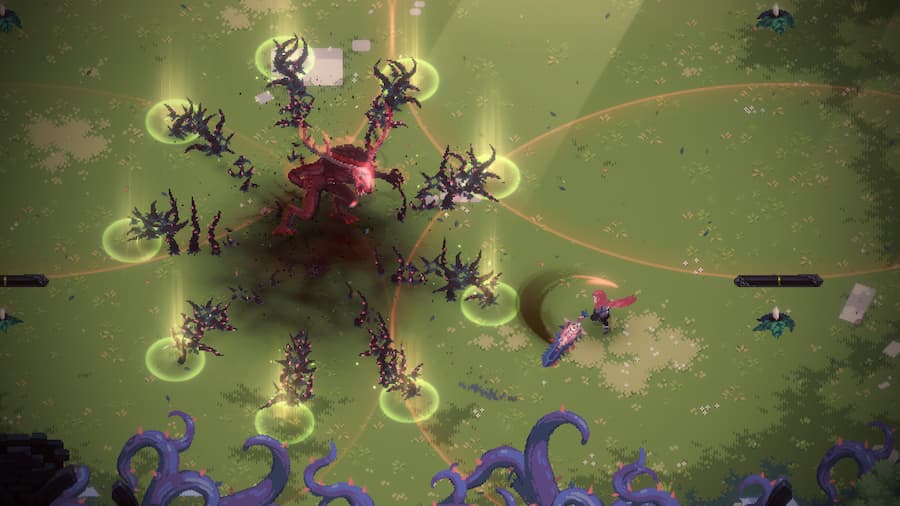 It took me about five hours to complete Eldest Souls, but depending on your boss-slaying skills you could be watching the credits roll in half or double that time. Your journey with the game doesn’t have to be over at that point, though. New Game Plus mode allows you to play again, further improving your character while facing off against bosses that are much stronger. And there’s an arena mode, allowing you to tackle any of the game’s bosses straight from the title screen. Needless to say, for those up to the task, Eldest Souls offers good value for money.

Sporting wonderful pixel art and a fantastic soundtrack, Eldest Souls is sure to go down a storm with Soulslike fans who would simply like to get to the nitty-gritty. Of course, the loss of the smaller battles in between means that there’s no opportunity to level your character up if you’re struggling, but the short and sharp nature of the fights on offer, and the ease of which you can respec to try a different approach, makes up for that somewhat. It’s a just a shame that Eldest Souls sometimes feels unfair, with victory being the result of your foes not making use of certain powerful skills.

This review of Eldest Souls is based on the PS5 version, with a code provided by the game’s publisher. It’s available on PS4, PS5, Xbox One, Xbox Series X/S, Switch and PC.