Ready to take on the Deadites? You’re going to have to wait a little longer as Evil Dead: The Game has been delayed.

The upcoming PvP and co-op chainsaw-em-up was pencilled in for a 2021 but developers Saber Interactive have tweeted that it’s been delayed until February 2021.

“We’re targeting a new release date to give the team some extra time for polish and to ensure this is the ultimate Evil Dead experience you’re all waiting for!” reads Saber’s statement. We’re definitely okay with that; Evil Dead games have been a bit of a mixed bag so it certainly seems like a sensible move.

Evil Dead: The Game already has Bruce Campbell on board, voicing monster-slaying buffoon Ash Williams but will also feature Dana DeLorenzo and Ray Santiago, who played Kelly and Pablo in the Ash VS Evil Dead TV series. It’ll also feature Henry and Arthur from Army of Darkness though we’re hoping Mia from the 2013 Evil Dead movie will be added to the roster.

The delay, however, has an unexpected bonus; Evil Dead: The Game will sport a single-player mode, which is something we’re really looking forward to. We’re hoping it features Left 4 Dead style bots, rather than just being a string of challenges but even so, playing as a solo Ash wouldn’t be a bad thing and it’d be in line with the movies.

Evil Dead: The Game will be released this February (fingers crossed) on PC, Xbox One, Xbox Series S|X, PlayStation 4, PlayStation 5 and Nintendo Switch. You can find out more from the game’s official website. 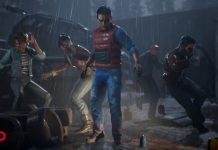 How to Perform a Finisher in Evil Dead: The Game