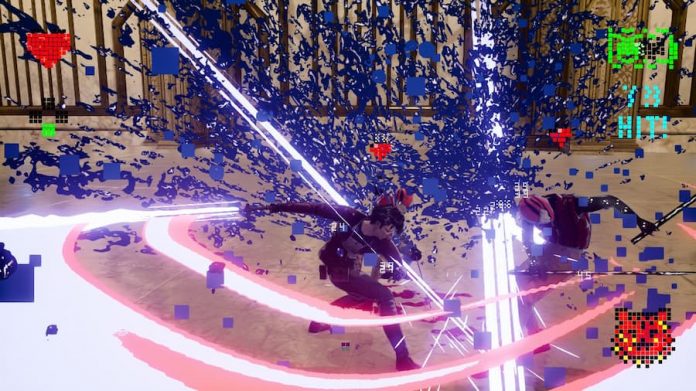 As you make your way through No More Heroes 3, you sometimes might find yourself struggling in combat.

The good news is that you can make things easier for yourself by increasing your stats and learning new techniques. And another thing you can do is buy sushi, which provides temporary bonuses and can be eaten during combat during No More Heroes 3 for a range of benefits including healing.

To heal during combat in No More Heroes 3 you’ll want to buy takeaway sushi called Maguro. You can buy it from Don Machi sushi stalls located throughout the game’s world, and you’ll generally find one just before each of the game’s ranked battles, too. Maguro costs 500 UtopiCoins, though sometimes it’s on offer, and you can carry up to five at one time.

To use Maguro in combat to heal yourself, simply press left or right on the d-pad until it’s selected, then press up on the d-pad to eat it. You’ll be vulnerable for a short while as Travis tucks into his meal, but your health will quickly be restored. Other types of takeaway sushi you can buy offer benefits such as increased attack power, so consider buying some of them, too, if you’re struggling in any particular battle.

Eat-in sushi can also be useful. One of the meals you can buy, for example, will fully replenish your health one time if you die, while another will boost all of your stats. Just be aware that the effects only last until the end of your next battle.