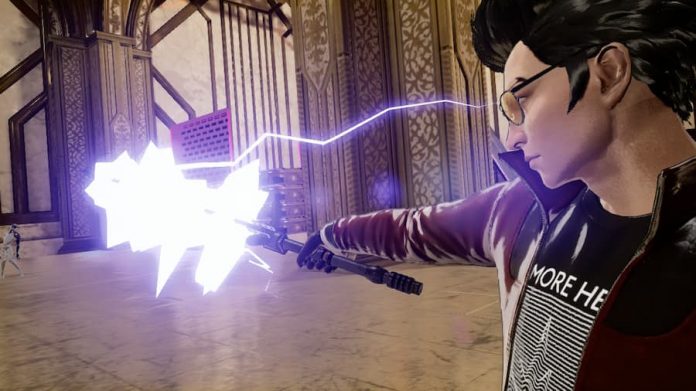 No More Heroes 3 isn’t the biggest game in the world, but chances are you aren’t going to complete it in one sitting.

For that reason you’re eventually going to want to know how to save your game. No More Heroes 3 does explain how to save very early on, but you could have quite easily missed it. You might also be returning to the game after not playing it for awhile. In any case, saving your game in No More Heroes 3 is the same as in most No More Heroes games – you need pay a visit to the toilet.

Toilets are spread throughout the world of No More Heroes 3. You’ll find one at Travis’  motel in Santa Destroy, and there are also many littered throughout the open world. To be able to use those ones, however, you’ll need to complete a cleaning mini-game first, which is easily done. Toilets are also usually found just before ranking battles, allowing you to save your progress in case the challenge proves to be just too much.

As No More Heroes 3 doesn’t autosave your progress, you should get used to visiting toilets and manually saving regularly. Otherwise, you might lose some progress at some point. We should note, though, that the game does have checkpoints. So, if you die to a boss, for example, you won’t need to load your last save and watch a load of cutscenes again. You’ll be able to just jump right back in, and maybe even score a bonus to boot thanks to the retry roulette wheel.

And finally, multiple manual save slots are available, so make use of them. You never know when you might want to go back a little bit. Or you could use them for various users or difficulty settings.