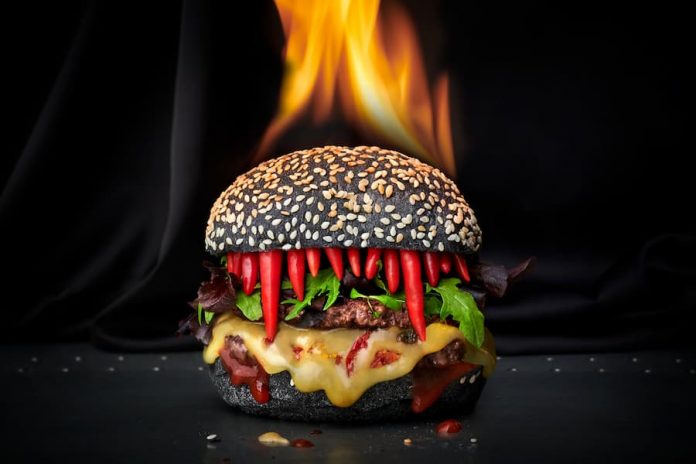 ONE MILLION SCOVILLES? Not for me, thanks.

Okay, this is the type of PR fluff story that, in any usual case, I ignore when it lands in my inbox. But there’s something about this one that caught my eye. Whether it’s because it’s a burger – and I’m a fan of burgers – or whether it’s the absolutely ridiculous vampire-teeth layout of the chillis, I just had to share this with the world.

So, to celebrate the launch of King’s Bounty II – an RPG with turn-based combat that we deemed to be rather mediocre, unfortunately – publisher Koch Media has teamed up with Luxxo Burger, a restaurant in Surbiton, London, to deliver this absolutely ridiculous burger. It’s called the Dragon Burger, and it boasts a heat of 1,000,000 Scovilles. I mean, its picture speaks for itself, but let me tell you exactly what’s in this beast:

It’s actually that secret hot sauce that boasts the million Scoville heat. For the unfamiliar, the Scoville scale is a measure of how hot a chilli is, and I’m told on good authority that a standard Jalapeno pepper is around 8,000 Scovilles. So, a million is… a lot. Mouth on fire, stomach death kind of hot.

If you want to pick up this ridiculous burger, you can apparently head into Luxxo Burger – located on Tolworth Broadway in Surbiton, if you’re local – and order one. It’s available for a month as of yesterday, and every purchase will come with the chance to win a copy of the game – some burgers will come with a code printed in the box.

I’m disappointed we don’t live a bit closer, because I’d absolutely order one, in the name of science. If you do happen to want to bite into 1,000,000 Scovilles of chilli pepper/beef goodness, please let us know what it’s like.