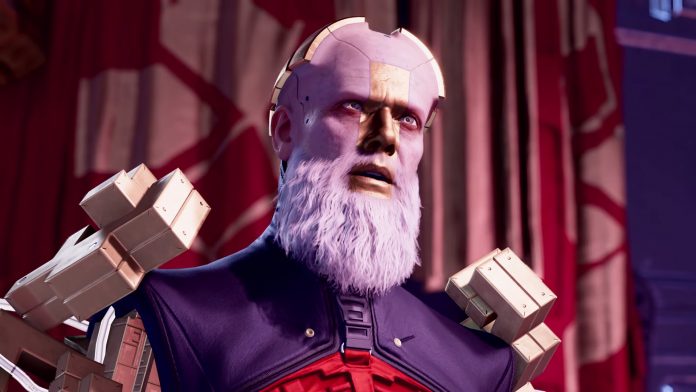 Marvel’s Guardians of the Galaxy’s new trailer, which introduces Grand Unifier Raker, has left us with an important question.

Specifically, how does Grand Unifier Raker, head of the Universal Church of Truth get that gold rectangle on his face? Best we can figure he’s got a big piece of cardboard with a hole cut in the middle and ever morning he puts it on his face, closes his eyes, and just goes wild with a can of gold spray paint.

Sadly, the version of the trailer with commentary (revealed at Gamescom) doesn’t address this important issue. But it does reveal that Raker is based upon Cardinal Raker, a character from the 2008 Guardians of the Galaxy comic run and, even though he sounds pretty benevolent, he’s determined to spread his faith throughout the galaxy.

The trailer ends with Peter Quill and friends being taken into a gigantic tubular spaceship, supposedly to meet with “The Matriarch”, which definitely won’t turn out to be a hugely sinister encounter that the team end up having to blast their way out of.

Between this and previous trailers we’re actually rather looking forward to Marvel’s Guardians of the Galaxy. It’s set to arrive on PC, PlayStation 4, PlayStation 5, Xbox One, Xbox Series S|X , Nintendo Switch and GeForce Now this October 26th, the latter two via streaming.

We still think Drax looks like Uncle Fester, though. 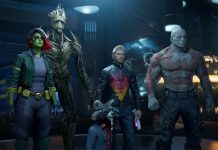