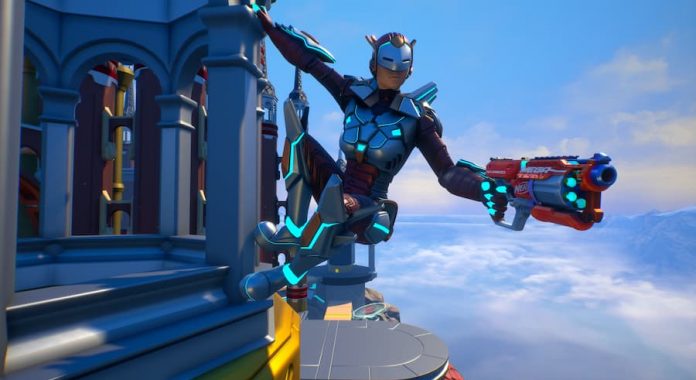 Okay, there’s more to the game than that; unlike Overwatch, this upcoming shooter will feature a proper single-player campaign, alongside its competitive FPS element. But its larger than life characters, brightly coloured levels and foes and rather silly weapons definitely puts us in mind of that title.

That said, we’re mildly disappointed that, from what we can see in the trailer, the darts have been given a sci-fi spin. We’re kind of hoping that, in the final game, there’s at least an option to fire authentic-looking foam bullets that have been chewed by your dog then batted under the couch. We wouldn’t say no to super soakers finding their way into Nerf Legends either.

Developed by GameMill Entertainment, Nerf Legends will also let you create your own custom character and take on up to seven other players in 4v4 matches or eight player free-for-alls. It’ll also feature toys from Nerf’s 2021 range so, in theory, you’ll be able to head out and purchase the same weapon you’ve been using in-game.  Granted, the same applies if you play regular FPSes and live in America, but it’s still kind of a cool thing.