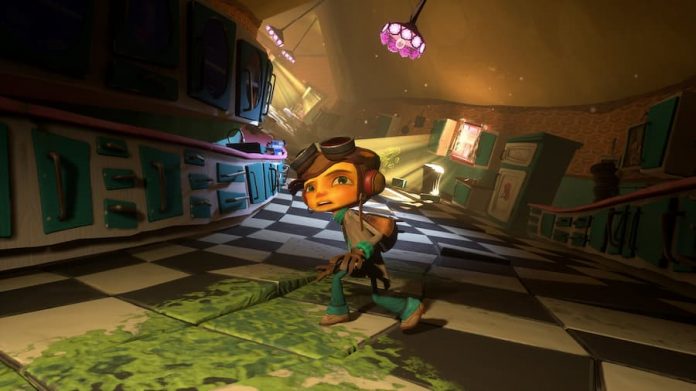 Sixteen years after its release, Psychonauts finally has a sequel. And was it worth the wait? Pretty much, yes.

Full disclosure: I played Psychonauts for the first time a week ago, and I’ve jumped into Psychonauts 2 without any strong feelings for the franchise. Ultimately it hasn’t mattered, though; even without really caring for the characters going in, my time with Psychonauts 2 has been filled with unabashed fun. Its narrative is important, sure, but it’s second to exploring its gorgeous, inventive world. Double Fine has created a game that simply wants its players to enjoy every moment. It very nearly 100% succeeded; only a few minor frustrations let it down. But we’ll get to those later.

Psychonauts 2 puts players back in the shoes of Razputin (or Raz), the protagonist of the first game. He’s now an intern at the esteemed Psychonauts agency, being let loose on proper agency missions for the first time. Well, eventually. First, he’s put on assignment in the mail room – but that quickly doesn’t go to plan. Before long you’re exploring the full stretch of the agency and popping into people’s minds for a quick snoop around – often coming up against more than you bargained for. But you’re a Psychonaut now. Nothing is too much for you to handle.

The story revolves around antagonist ‘Maligula’ and the fact that there’s a mole inside the agency. You’ll spend your time trying to figure out who the mole is and uncovering Maligula’s true identity – and plenty of twists are thrown in along the way. It’s a well-written narrative, helped along by wonderful characters, expertly voiced by a talented voice cast. There’s even a fantastic performance from Jack Black to look forward to around half way through the game (would it even be a modern Double Fine game without him?). 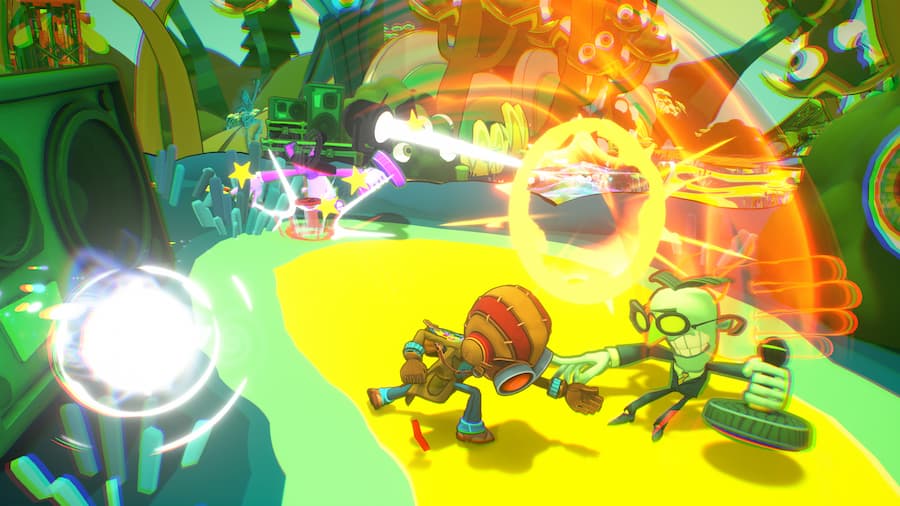 It doesn’t really matter if you haven’t played the first game, though the story does sort-of follow on, so you’ll get more out of the experience if you’re already familiar with the characters and the world of Psychonauts. There is a wonderfully animated recap, though, to act as an introduction or refresher. After all, even if you have played the first game, it may well have been fifteen years ago. And I can barely remember what I did fifteen days ago.

Whether you’re inside someone’s head or exploring the ‘real’ world, Psychonauts 2 is filled with varied levels and gorgeous environments. It’s packed with wonderful ingenuity; one minute you might be driving around a psychedelic map in a VW-style camper van, the next you could be rolling around a cityscape on top of a giant bowling ball. Even on the longest levels that fly dangerously close to outstaying their welcome, they’re filled with enough variety that you’ll never get bored. 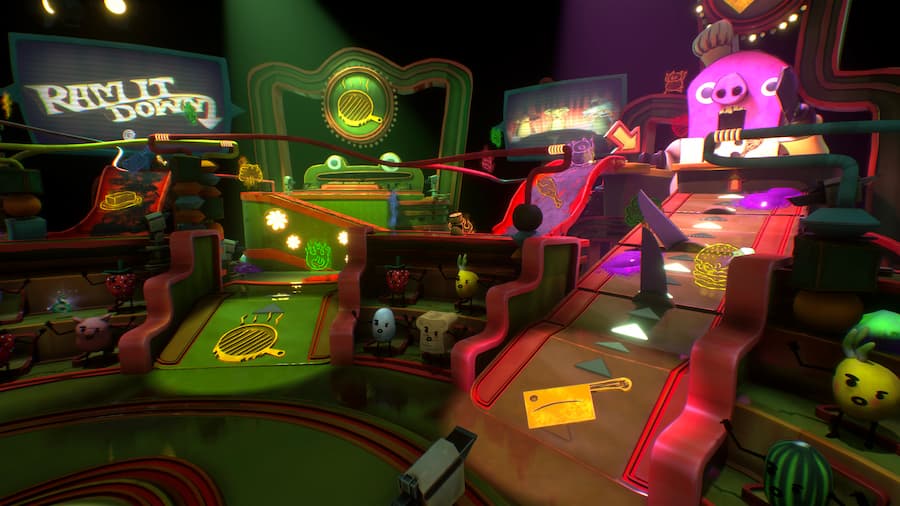 Truly, I can’t overstate just how much variety has been squeezed into Psychonauts 2, and most impressively in a way that feels coherent. You might be performing in a flea circus, or taking part in a rather dangerous cooking reality show. Or maybe you’ll be burning paintings in order to rid the negative thoughts out of someone’s head, or literally jumping through pages of books. That’s just the tip of the iceberg; the design of every level here will put a huge smile on your face, and discovering what awaits for you next is one of the greatest joys of playing through Psychonauts 2.

It’s not all quite so joyful, however. Some of Psychonauts 2‘s platforming mechanics are not as tight as they should be. Wall-jumping in particularly is troublesome; often, Raz will jump in the wrong direction, or it’ll take several attempts to initiate the wall jump as you intended. It’s not always clear to see if you need to single-jump or double-jump either, especially if you’re trying to grab on to a swing to get from one platform to another. Missing a jump isn’t the end of the world; even if you fall to your death you’ll lose only a smidgen of health and be reset right where you were, but it’s a frustration that I didn’t expect to find. 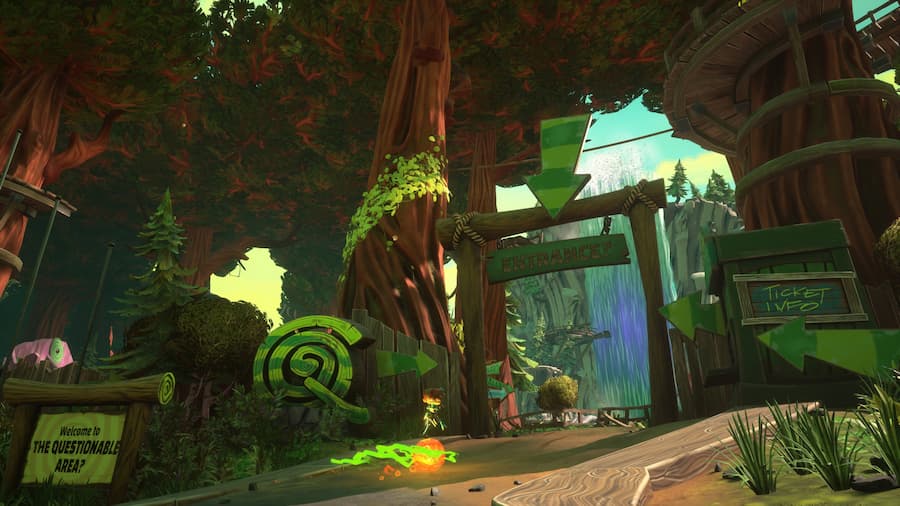 The way Psychonauts 2 handles skills is also irritating, particularly in the second half of the game where you’ll often need to use multiple skills in a short space of time. You’ll learn a handful of skills very early on in the game, with the last few being drip-fed to you throughout the rest of the run time. Ultimately, you’ll have eight skills, all of which you’ll need to use in order to progress through a level. You can only ever have four equipped at once, however, and it’s likely you’ll want to always have at least two core skills assigned at any one time (for me, they were the floating ability, that allowed me to extend jumps or move more quickly through environments, and the ranged attack).

That means you’ll constantly need to be in the skills menu, reassigning skills to buttons and back again, sometimes in quick succession as new obstacles appear in front of you. You’ll likely also want to change them out again during combat; some enemies require you to use your time-slowing skill, for example, while others are much easier to kill if you use your pyro skill. Obviously the controller has a limited number of buttons, but I do wish there was an easier way of managing skills. Needing to jump in the menu so often really do affect the flow of the game. 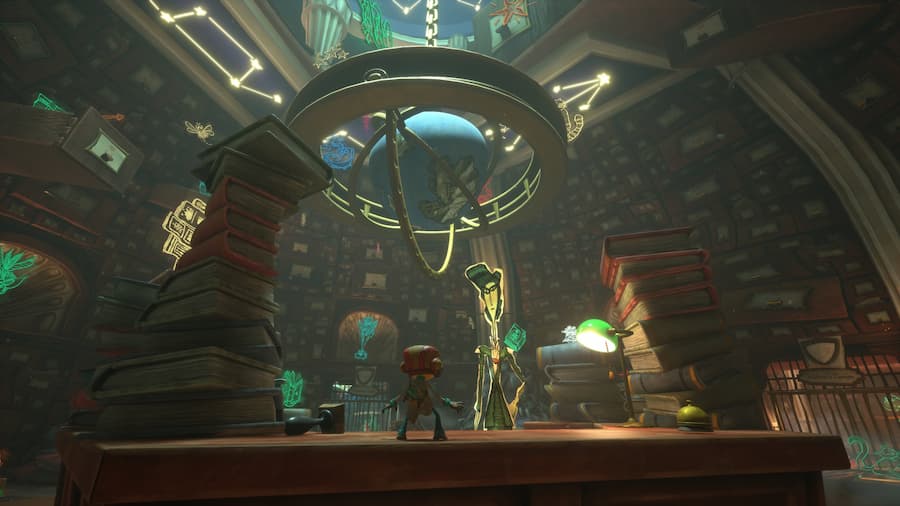 Ultimately though, those frustrations are fairly minor in the grand scheme of things, and are unlikely to truly ruin your experience with Psychonauts 2. The sheer wonder of exploring its world will win out. It’s also nice to see that Double Fine have implemented a range of accessibility options: you can turn off fall damage, make combat easier or even make Raz completely invincible. Able players shouldn’t have much of a problem with combat but it’s refreshing to see these options available for players that need them – and even better, using them doesn’t block out achievement progress, either.

You might groan and grumble as Razputin messes up yet another jump, but as Psychonauts 2 progresses, unravelling yet another spectacular world for you to explore, you’ll likely forget about any frustrations. This is a brilliantly designed game, and it’s clear a huge amount of ingenuity has gone into its creation. Whether you’re battling hand-puppets, talking to a papercraft William Shakespeare or gambling inside a maternity ward (no, really), one thing is for sure: you’re going to have a lot of fun playing Psychonauts 2.

This review of Psychonauts 2 is based on the Xbox Series X/S version (played on Series S) via a code provided by the publisher. It’s available on PS4, Xbox and PC. 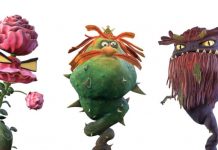 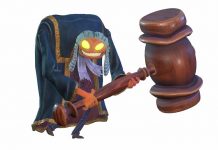 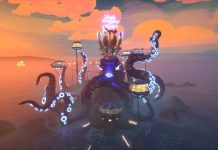