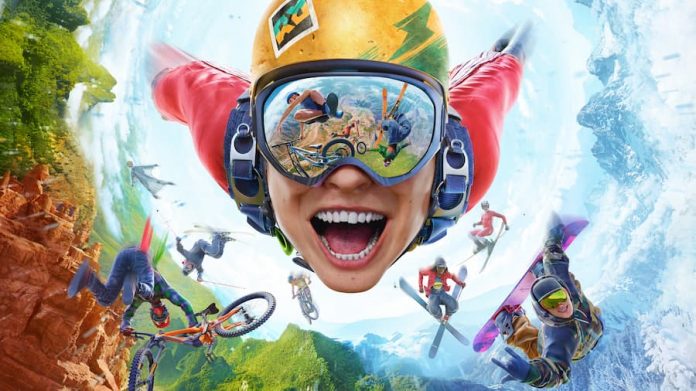 What’s that? You want to go biking down a hill in a giraffe costume?

Out in October, Ubisoft’s Riders Republic is an extreme sports game that’s all about having fun. It doesn’t take itself seriously at any point, and it’s all the better for it. A fusion of ideas from The Crew 2, Steep and Trials Rising, Riders Republic lets you loose across a series of America’s National Parks, skiing down mountains, biking through valleys and flying in a wingsuit through canyons. Every moment of the game is adrenaline-fuelled mayhem, and it’s glorious.

Having been hands on with a few hours of the game thanks to a closed beta, we can confidently say we can’t wait to play more. Riders Republic presents a true playground, where you can tackle events however you want, whenever you want. Want to focus on biking? Sure. Would you rather practice your snowboarding tricks? That’s fine too. Maybe you want to join in mass events with 60 other players? Go for it. Or if you’re a lone eagle, tackling events by yourself, that’s cool too.

After customising your character, you’ll be taken through a fairly robust tutorial, introducing you to each of Riders Republic‘s sports. You’ll try them out, learning the basics, before being shown around the Riders Republic HQ, an area where you can jump into a wide variety of multiplayer events. Not all have been available to try in the beta, but there’s a range of PvP and team-based arena events to take part in. It’s here in the hub that you can jump into a ‘Mass Start’ race too – these we did get to try, and boy, they are hectic. Imagine Fall Guys but if everyone was on skis, freefalling down a mountain.

Up to 60 players can take part in one Mass Start race. You’ll cycle through each of Riders Republic‘s main events, switching seamlessly from a bike to a glide suit to a snowboard in the blink of an eye. With three rounds, you’ll have a chance to climb the leaderboards, but performing well is difficult with so many people vying for space on the track. Expect to get jostled from side to side, pushed out of the way of a checkpoint and perhaps into a tree. But hey, it’s all part of the fun. We have absolutely no illusion we’ll ever finish in the top 10 in one of those things. 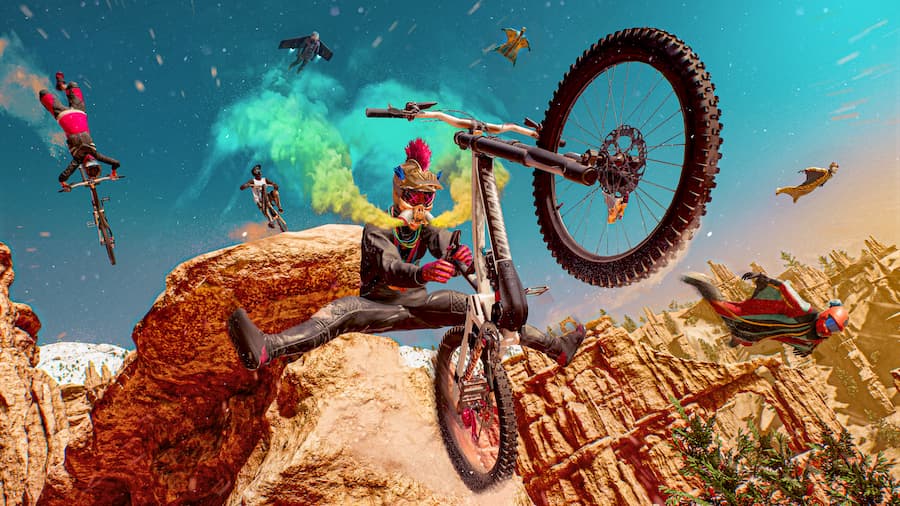 Standard events aren’t quite as chaotic as Mass Start events, but they can be just as silly. Yes, you’ll find yourself suddenly dressed in a giraffe outfit, with a long, inflatable neck flapping in the wind high above your face. Is there a reason? We’re not sure. Does there need to be? Everything Riders Republic does is in the name of fun, and we’re here for it.

If you decide to tackle events alone, you’ll be placed against real players’ ghosts, similarly to the way Trials Rising handles versus events. Whether or not you’re dressed in a ridiculous animal suit or the outfit you’ve chosen for your own avatar, you’ll either focus on speeding through checkpoints, trying to reach the coveted first place, or aim to get the highest score by performing tricks and stunts.

That’s right; Riders Republic isn’t just about racing. What’s particularly great about the stunting aspect is that you can tinker the settings to make it as hard or easy as you’d like. An auto-land feature means you’ll always land your tricks. Turning it off means you’ll need to always land just right, but perfecting it means more points are up for grabs. You can also tweak other aspects; make performing tricks harder for yourself in other ways, and you’ll be able to unlock bonus multipliers to your score. There’s also two different control styles available; one has you press buttons to perform tricks while the other favours pushes of the thumbsticks. It’s an excellent level of customisation which allows you to tweak the experience to best suit you.

As you progress through Riders Republic you’ll gain stars and increase your overall rank. You’ll progress simply by completing events, but performing better and completing challenges within those events will see you net more stars. Our progress was locked off in the beta, but as your rank increases you’ll gain access to new events, unlock new bikes/wingsuits/skis, and earn new customisation items. 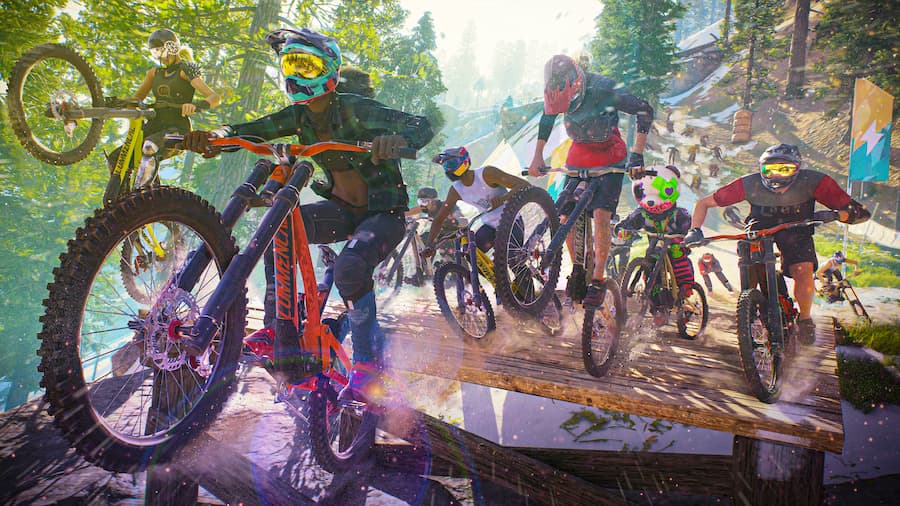 It looks fantastic, too. For many of us, this is the closest we’ll ever get to travelling through Sequoia or Zion at high speed; the scenery is incredible. Between events you’ll probably just want to razz around on your equipment of choice, mucking around and taking in the sights. You can even pop out an in-game camera and immortalise those views via Riders Republic‘s photo mode. We’ve played on PS5, so we’ve also experienced the game’s almost non-existent loading times. Fast-travelling from one mountain top to another in the blink of an eye will never not be satisfying.

We can’t wait to play more Riders Republic. If you’re a fan of zany extreme sports, or simply like to have fun in a huge open playground, there’s an awful lot to love here. Look out for more from us on the game closer to its release date.