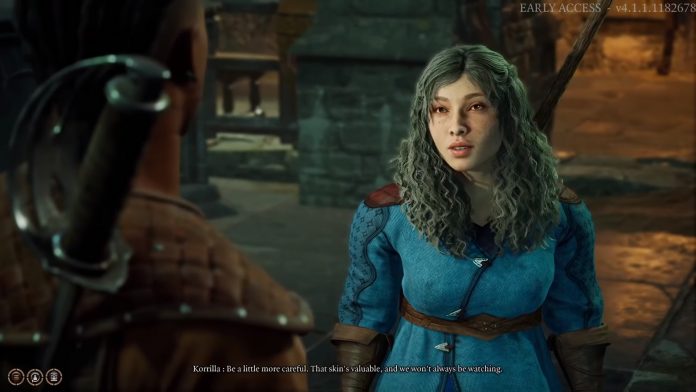 Baldur’s Gate 3, currently in Early Access, has the odd issue or two.

That’s to be expected; Early Access titles are, after all, unfinished games. The developers get some much needed funding as well as some free bug testing, purchasers get their hands on a game well before its release and, if all goes well, they get a final, polished product when it does release.

Except.. sometimes the bugs that end in Early Access titles can be a little offputting. Take this particular bug from Baldur’s Gate 3, the third entry in the hugely popular series, set in the Dungeons & Dragons: Forgotten Realms world. Surprisingly, it’s not being developed by Black Isle, the studio responsible for previous entries, but by Larian Studios, creators of the Divinity series.

The bug relates to Korilla Hearthflame, a character who’s apparently keeping an eye on the player character. As she walks away she warns the player to take better care, with the vaguely sinister statement, “That skin’s valuable”. But that’s nothing compared to the horror that takes place next.

There’s absolutely no way we’re going to be sleeping tonight; we just keep imagining her spider-walking down the stairs, Exorcist style, or clambering out of a car like Julie Carmen’s character in In The Mouth of Madness. Still, at least now we’re not alone in our torment.