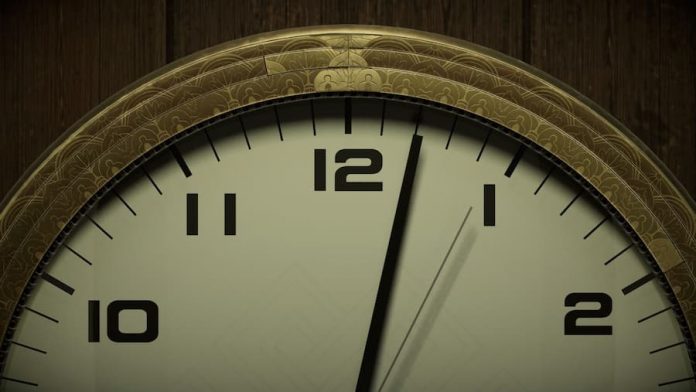 They say repeating the same thing over and over and hoping for different results is a sign of madness. Playing Twelve Minutes often feels like you’re going mad.

Your protagonist, a nameless husband, arrives home from work to greet his wife. She has a surprise for him – she’s made his favourite dessert. And she’s got quite a special evening planned for them. But the universe has other ideas; a policeman knocks on the door, accuses the wife of murder, and ties both of them up on the floor while he tries to extract the information he needs. But after twelve minutes, it’s all over, and the husband finds himself arriving home from work again. It seems he’s stuck in a 12-minute time loop.

There’s a lot to unpack, but with just 12 minutes in which to act, your protagonist doesn’t have time to dwell. In those minutes, he needs to convince his wife he’s stuck in a timeloop, figure out who the cop is and what he wants, and dig to the bottom of the allegations he tosses at his wife. That’s a lot of information to gather. Maybe you’ll manage it quickly, but the chances are you’ll be repeating yourself in Twelve Minutes multiple times, each time perhaps garnering a tiny hint of what to do next.

One of the draws of Twelve Minutes is its star-laden cast. James McAvoy, Daisy Ridley and Willem Dafoe provide voice talent for the game’s main characters, all of them putting in performances as excellent as you’d expect. Their talent escalates the game beyond its own technical capabilities – there are some bugs here, like characters walking through each other and the odd glitch when you try to interact with something – but they’re easily forgiven. It may be simple visually, but it’s not a stretch to view Twelve Minutes as a cinematic work of art.

Played from a top-down perspective, Twelve Minutes is entirely set in the couple’s very small apartment. There’s a kitchen/living area, a bedroom, a bathroom and a closet. You can interact with items around you, but there’s not much. That you’ll quickly become glad of; figuring out how to proceed becomes an exercise in trial and error, and so having a limited number of items to interact with is soon a god-send. 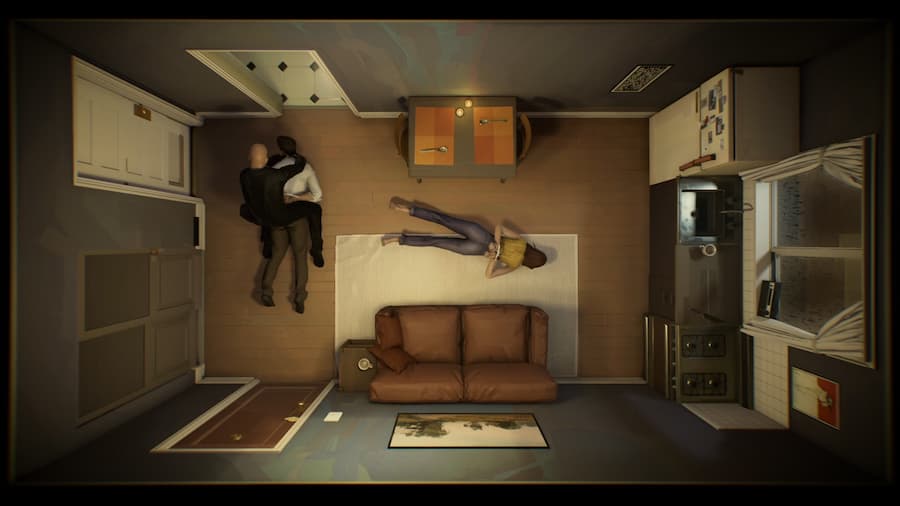 Your first few loops of Twelve Minutes will likely be filled with experimentation and, depending how depraved you are, seeing how far you can push the game’s boundaries. It turns out, you can push them surprisingly far. There’s a faulty light switch in the bedroom; if you turn it on more than once it’ll electrocute you. Yes, you can die doing so. So can your wife. If you want to get really dark, how about the knife that’s laid on the kitchen worktop? You can at least grab it to protect yourself from the policeman, right? Or maybe… no… we can’t go that far, surely? The game will let you if you really want to.

The limits to which you can stretch Twelve Minutes are testament to the talents of the developer, Luis Antonio. This truly feels like a playground for your imagination; not only can you test the limits of your own morality but also the limits of usual video game design. You can interrupt the patterns of your wife – a NPC – and she’ll react to them, working around them. When she’s laying the table but you have a mug she needs in your inventory, she’ll just ask you to finish it off. If she catches you snooping on something you’re not meant to see, she’ll let you know she’s pissed off. These are moments of real ingenuity – an action that would be game-breaking elsewhere is simply part of Twelve Minutes‘ experience. 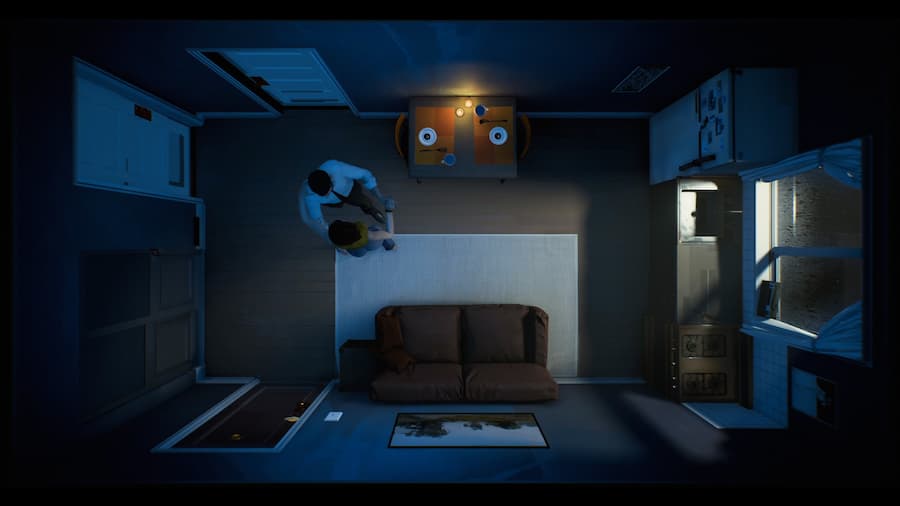 The fun of experimenting soon wears off, however, when you want to make meaningful progress. Forget about the game’s unique timeloop mechanic, and what you have is a barebones point-and-click adventure. That means obtuse puzzles and solutions that you’re more likely to accidentally stumble on after half-a-dozen attempts rather than actually deduce. Of course, there’s nothing totally obscure here – aside from its time-bending shenanigans, Twelve Minutes is set within the realms of reality – but some of the most obvious solutions to the situation at hand won’t even be an option to you. Hiding in a wardrobe and sneaking out on the policeman from behind feels logical, but the policeman will always outsmart you – even after you’ve witnessed how he behaves a dozen times.

It goes without saying that repeating the same series of actions gets very tiresome. You might know you need to do something specific once the policeman arrives, for example, but you’ll still need to get there by repeating the several minutes leading up to that moment. Twelve Minutes does help iron out some of the tedium by introducing shortcuts to certain moments. Early on, you’ll need to convince your wife of your timeloop by presenting her two pieces of evidence. But once you’ve progressed a bit further and got some extra information, you can skip it by giving her enough information to convince her – and get her up to speed with the current predicament – in one fell swoop. It helps, yes, but you’re probably still going to have to sit through that same piece of dialogue four, five, ten times while you’re figuring out what comes next.

Of course, when you do figure out how to proceed in Twelve Minutes, it’s a sweet victory. When your current timeloop takes a new turn, it’s exciting and seeing a new piece of the story unfold is reason for being glued to your screen. There are some twists along the way that may well make you audibly gasp – but ultimately, it all ends with a bit of a whimper. Was the journey really worth it? While it’s likely to take you around eight hours to complete Twelve Minutes, most of that time is simply spent figuring out what to do. Use a guide and do exactly what you’re supposed to in order to progress, and you’ll be done in about an hour. 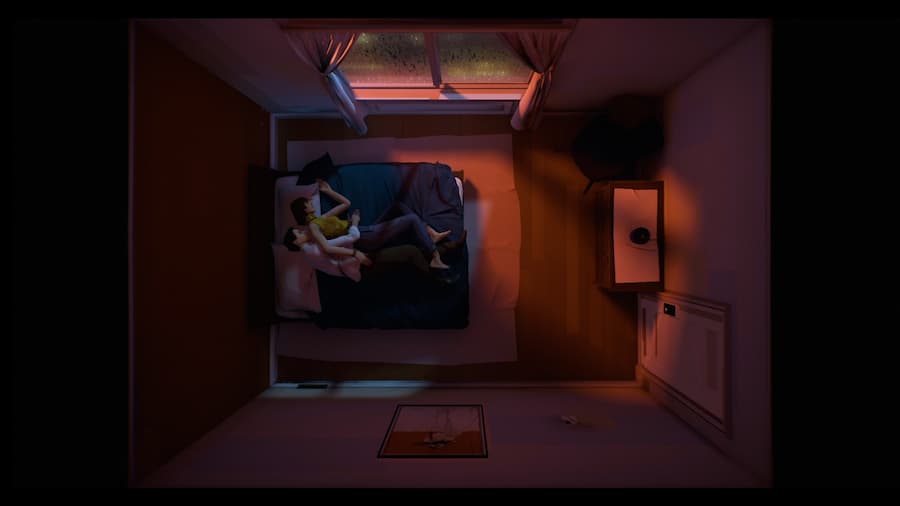 You shouldn’t play Twelve Minutes that way, though, because a big part of the game is experimentation, living through multiple time loops and seeing what happens. But the fact is most players are likely to get frustrated and need guidance on what to do next. An in-game hint system would be useful – or even the ability to rewind. Twelve Minutes employs a VHS cassette aesthetic whenever you’re in your inventory or making a dialogue choice; the world around you freezes, like a paused VHS tape. You can also fast-forward through some bits of dialogue that you’ve already heard. So why not employ a rewind function in the same vein? You’ve tried something, it went wrong; rewinding rather than resetting the whole loop would make the game’s reliance on trial-and-error much easier to stomach.

In the end, I enjoyed some of my time with Twelve Minutes. Its story is genuinely gripping, and the cast’s performances are excellent, solidifying the game as a believable world. In many ways, developer Luis Antonio has created something truly remarkable here. But so much of Twelve Minutes is an exercise in frustration and repetition. You’re going to need a lot of patience to keep going, and ultimately, I’m not sure if it’s entirely worth it.

This review of Twelve Minutes is based on the PC version of the game, via a code supplied by the publisher. It’s available on PC and Xbox.