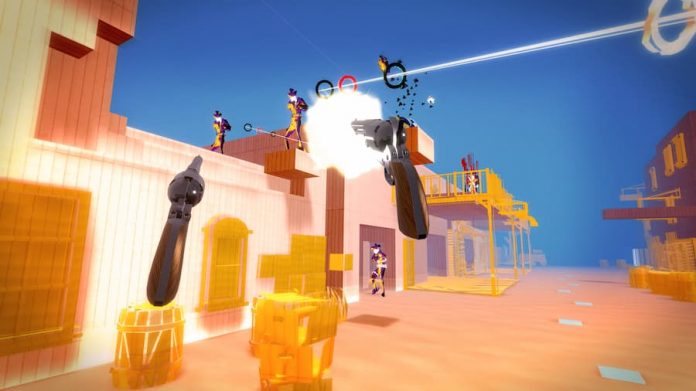 If you’ve yet to tackle this VR shooter, it’s essentially Beatmania with guns. You wander through a surreal world blasting enemies as they come into view; it’s currently available on PC, PlayStation VR and Oculus Quest and now it’s about to get an upgrade.

The new western-themed content will, as you might well guess, see you facing off against gunslingers. It’ll be a fully-voiced campaign and will sport music from The Heavy, Black Pistol Fire, Bones UK, Devora and Magic Sword, so it looks like Smoke & Thunder will eschew the main campaign’s dubstep.

The update will also add a new “Styles” mode which will let you add modifiers to the game. Smoke & Thunder is free, sort of; it’ll arrive this August 12th but three days later, on August 15th, the price of the game will rise by $5. Still, that doesn’t sound too bad for what looks to be a heaping helping of new content.

If you want to snap Pistol Whip up now, you can get it through the PlayStation Store if you have a PlayStation VR headset, the Oculus store for the Oculus Quest 1 and 2 and Steam if you own a Steam VR compatible PC headset.

Watch the trailer below for an overview of everything that’s new.