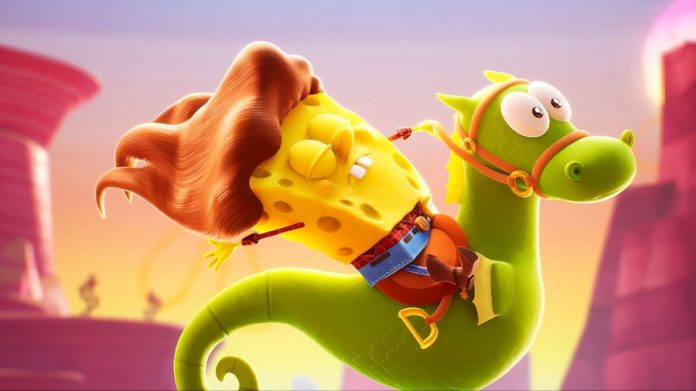 Announced during tonight’s THQ Nordic Showcase, a new Spongebob Squarepants game is on its way.

Called Spongebob Squarepants: The Cosmic Shake, the latest videogame installment for everyone’s favourite living sponge sees him and his friends get up to a whole new level of adventures. Out of this world adventures, actually. When Spongebob and Patrick accidentally open up a series of portals, they find themselves bounding between ‘Wishworlds’; strange universes the pals have never seen before.

While we haven’t seen any gameplay for The Cosmic Shake yet, the announcement trailer is fun and colourful, and is enough to get us excited for what the game may entail.

We’d expect similar platforming shenanigans to Battle for Bikini Bottom, albeit with all-new locations and a new zany story to follow. There are seven worlds in the game for Spongebob and friends to explore, with over 30 skins to dress the characters up in.

There’s no release date for Spongebob Squarepants: The Cosmic Shake just yet. But it’s interesting to note that the trailer lists the game for PC, PS4, Xbox One and Switch. No mention of PS5 and Xbox Series X/S in sight. Unless next-gen versions are announced later, we’d imagine we’ll be seeing the game in the first half of 2022. Hopefully anyway.

We’ll have more news on The Cosmic Shake as it becomes available. Until then, enjoy the trailer below.

The THQ Nordic Showcase also revealed a Destroy All Humans! 2 remake, a new look at Elex 2, Outcast 2, Jagged Alliance 3, Superpower 3 and MX vs ATV Legends. You can watch the showcase in its entirety by clicking here.