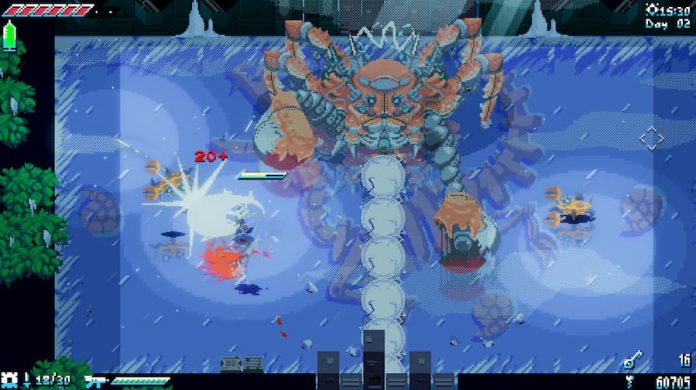 Pixel-styled action-RPG Unsighted now has a September 30th release date and a new trailer to mark its impending arrival.

Unsighted was announced back in June and puts you in the shoes of an amnesiac android badass, Alma, who wakes up in a post-apocalyptic world. With her life-force draining away she has to kick bottom across this ruined world, looking for a way to get her memories back.

This top-down slash and shoot-em-up reminds us of nothing so much as a mash up of Mega Man and Dead Cells, though permadeath doesn’t figure into the mix. The pixel graphics are, however, very eye catching and look to be beautifully animated, particularly when Alma is doing something other than enemy-murdering, such as grappling her way across gaps.

There’ll be a ridiculous amount of weaponry to mess with; swords and shotguns are just the beginning and you’ll get to upgrade Alma’s abilities as you go on. The ending you get will, in turn, be affected by how much time’s left on the clock when you finish the game.  So while there may be no permadeath, there’s certainly a reason not dally.

Unsighted is coming to Nintendo Switch, PC, PlayStation 4 and Xbox One this September 30th. A demo has just hit the Nintendo Switch and there’s also a Steam demo which has been out for a few months, if you’re unsure if Unsighted is for you.