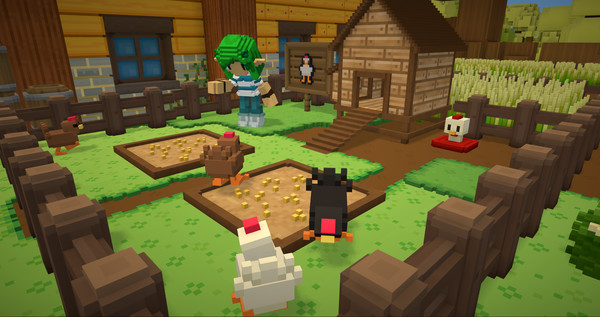 Staxel, a mash-up of Stardew Valley and Minecraft, is available for Nintendo Switch now.

We first took a look at this block-based farming sim when it was in Steam Early Access, in March of 2018, remarking that while it needed work, it had a lot of things going for it. It eventually launched in April of 2019 and, having received a positive reception on Steam, has now made the leap from the PC to Switch.

What’s particularly interesting about this title is that it lets you create and view a farm in first-person, so rather than surveying your handiwork from a bird’s eye view, you can wander leisurely through your domain. Assuming you’ve put the work in, that is; Staxel will still require you to actually make something of your farm, though since you build things brick-by-brick you can get it looking exactly the way you want.

Going beyond that, you can build houses for other villagers, though they’d blooming well better be grateful for it, otherwise we’re building a massive toilet in the centre of the village. Not because we have to, but because we’re petty like that. In fact, now we think about it, giving us full creative control over a burg may be a bad idea.

Staxel is out now for Nintendo Switch, available digitally from the eShop. It has a £19.99 price tag normally but there’s a 25% launch discount, making it £14.99.

Staxel Has Far to Go, But Manages to Impress