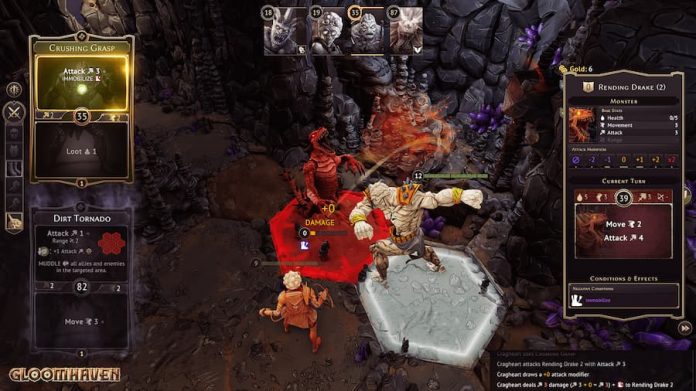 Gloomhaven, a highly popular and rather expensive dungeon-hacking board game is making its way to PC this October.

Even better, the characters are already textured, so you don’t have to spend the entire game looking at those grey characters, feeling guilty that you haven’t painted them but just knowing you’d make a huge mess of it. Gloomhaven isn’t just the game’s title, it’s where this monster-murdering outing takes place – and with a name like that, you just know it’s not going to be all candy-floss and kittens.

Technically you can play Gloomhaven now, since it’s in Steam Early Access, but this October 20th it’ll achieve its final final form, delivering hours upon hours of turn-based combat. It’ll also sport 17 different classes which, while not as extensive as, say Pathfinder: Wrath of the Righteous, is a step up from the Hero Quest board game that occupied a chunk of our youth.

Gloomhaven looks suitably striking, while still retaining the general mechanics of a board game. But what really has us paying attention is that it that casts you as a mercenary.  There’s none of this ‘Fabled Prophecy of Xyyynssspfffftaaaann’ business, you’re doing it for the money. If you’re playing in co-op, there’s the question of whether you work together as a team or let the lure of gold drive a wedge between you.

Gloomhaven’s videogame incarnation will sell for £27.79/$34.99 on PC and Mac, which is a lot cheaper than the £100 or so the board game costs. You could also, potentially, save yourselves a few pounds by buying the Early Access version now which is £19.49.

Whatever you choose, you can get your chainmail-clad hands on Gloomhaven’s full version when it launches this October 20th.