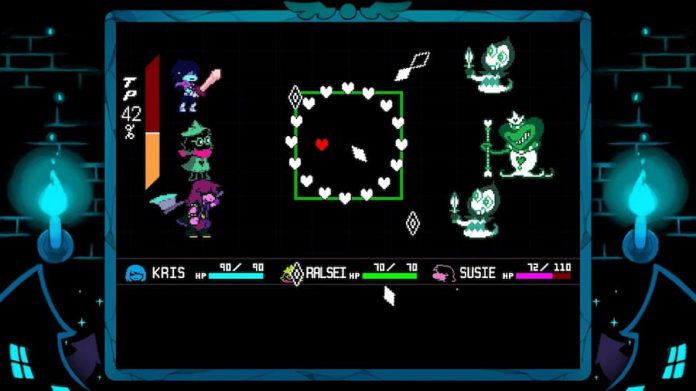 Yes, we’re very, very excited, not least because the first chapter of this Undertale follow-up ended on a cliffhanger. Normally, we grumble at cliffhangers, particularly when a game, movie or TV series isn’t guaranteed a sequel. Yes, we’re looking at you, Shenmue 3 and Santa Clarita Diet. But Deltarune Chapter 1 left us wanting more and tomorrow, Toby Fox is releasing the next chapter. Well, it’s tomorrow if you’re in the US’s EST time zone. If you’re in the UK, it’ll arrive at 1AM the day after.

Deltarune is a follow-up to the hugely, hugely popular Undertale; it’s not a sequel as such, but features several of the same characters in background roles. Your own character resembles a grown up Frisk from the first game but Toriel’s not your adoptive goat-mother, instead she’s a teacher at the school you go to. It’s an RPG of sorts, but the RPG battles involve action sequences that are more akin to a shoot-em-up.

Confused? Don’t worry, you don’t need to have played Undertale to get a kick out of Deltarune and, while we’d recommend you play the first chapter, you can jump straight into the new chapter if you so desire. What makes both titles so appealing is you don’t have to go around murdering enemies, pacifism is (mostly) an option, and the writing is so, so, heart-warming.

DELTARUNE Chapter 2 will release at 8PM ET on 9/17.
Thanks for waiting.https://t.co/dY8doW04bT pic.twitter.com/SJssTEF5gV

One question remains, however.. will Deltarune Chapter 2 be free? The Deltarune Chapter 1 title states they won’t, and we’re absolutely fine with paying though, since there will be more chapters, we’re hoping the price is reasonable.

We’ll find out September 17th 8PM EST / September 18th 1AM BST which is when Deltarune Chapter 2 launches on PC and Mac. It’ll almost certainly arrive on the PlayStation 4 and Nintendo Switch later.