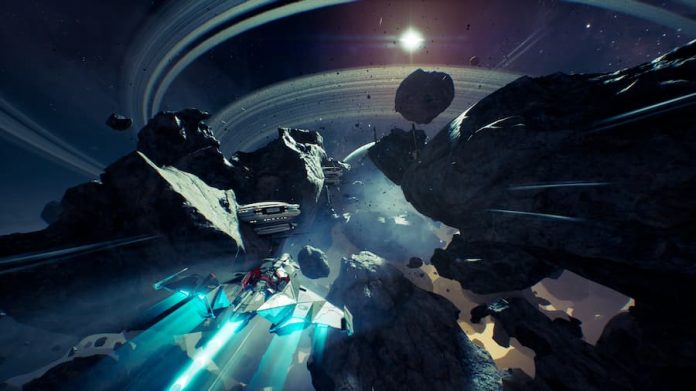 Chorus, coming this December, sees you annihilating a space cult with the assistance of a sentient starship. As you do.

But, thankfully, there’s no ancient prophecy nonsense going on here, even though the cult’s leader has dubbed themselves a prophet. Instead, Nara, your badass pilot was a tool of the cult so, wracked by guilt, she’s decided to put an end to them. Yes, she’s taking on a vast intergalactic order who have more capital ships than the Empire, so the odds would appear to be very much against her. But as Terry Pratchett put it in Equal Rites, “Million-to-one chances…crop up nine times out of ten.”

Chorus certainly looks impressive and going by what we know so far it very much looks like, as in Doom, keeping moving is the key to staying alive. And, while you’ll mostly be blasting around in open space, a couple of the levels shown off in the trailer remind us of descent, with Nara and her craft forced to make their way through vast, ancient complexes.

The “101” trailer, which you can watch below, will let you see the game in motion and you won’t have long to wait to get your hands on it. Chorus will blast its way onto Xbox Series X|S, Xbox One, PlayStation 5, PlayStation 4, Google Stadia and PC this December 3rd.