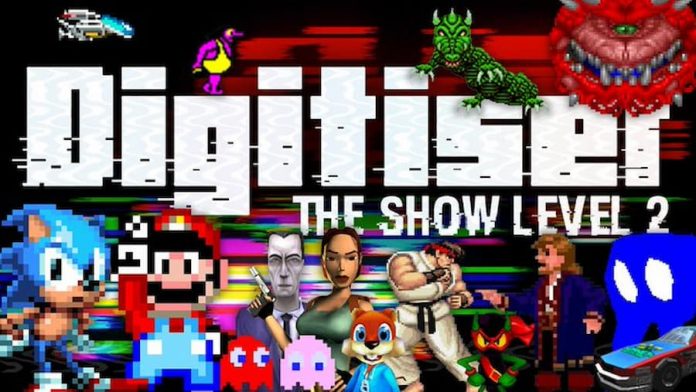 Want a YouTube series that takes a carefully-curated deep dive into retro-gaming, leaving you with a wide-eyed sense of wonder? Digitiser: The Show is not that series.

It is, however, a magnificently anarchic take on gaming which, at times, veers into pure madness. And now creator Paul Rose, AKA Mr Biffo, has launched a Kickstarter to get a second series made. Rose (who currently writes for TV) also wrote and co-wrote the original Digitiser Teletext magazine which was famous for, at times, being only tangentially related to videogames.

In the interests of full disclosure, I’ve backed both the original series and this upcoming second series and I regret nothing. You can watch the first series on YouTube, and I strongly advise you to do so because it needs to be seen to be believed. The panel discussions in Series 1 range from the mundane – Street Fighter 2 VS Mortal Kombat, through to the bizarre – identifying whether someone was a video game pioneer or a murderer.

Then there’s the real-life recreations of video games, such as “Duck Hunt For Real”, interviews with retro-gaming figures and micro game shows like “Mockety-Moc” and “Sniff Sonic’s Rings”, the former of which is clearly and legally distinct from Blankety Blank.

One thing in particular that sets the first series apart from other shows/series, such as GamesMaster, which is in the process of being resurrected, is that Mr Biffo and team just push through the chaos when something goes wrong. The absolute pinnacle of Digitiser The Show’s lunacy has to be the UFO Catcher For Real segment, which has contestants trying to use a remote-controlled mini-digger to pick prawns off long-suffering co-collaborator Paul Gannon’s reclining, unitard-clad form and place them in a bucket.

It doesn’t help that Gannon is allergic to shellfish, and so Mr Biffo and company have to avoid getting prawn juice in his mouth. But things really go off the rails when Larry Bundy Jr steps up. Bundy starts dry-heaving because, unbeknownst to all, the smell of prawns make him sick, so he’s quickly handed a bucket. The prawn bucket. The same prawn bucket that not only smells of prawns but still has one in there. You can guess how well that goes.

In fact, as you might be able to gather from the above video, having the team heave is very much a Series 1 motif, though given there’s set to be less studio-based stuff in Series 2, maybe there’ll be less gagging this time around.

The campaign has been live for less than half a day and it’s already smashed its £25,000 goal, having met several stretch goals including a real-life recreation of Luigi’s Mansion and having Mr Biffo marry an Amiga. Rewards include DVDs, though as Mr Biffo points out, you’re paying for the production of the show, not the DVD itself, hand-drawn doodles and a clump of Mr Biffo’s hair. No, I absolutely am not making this up.

Series 2 is set to air on YouTube in January 2023; if this all sounds up your prawn-tainted street you can back Digitiser The Show Series/Level 2’s Kickstarter here.