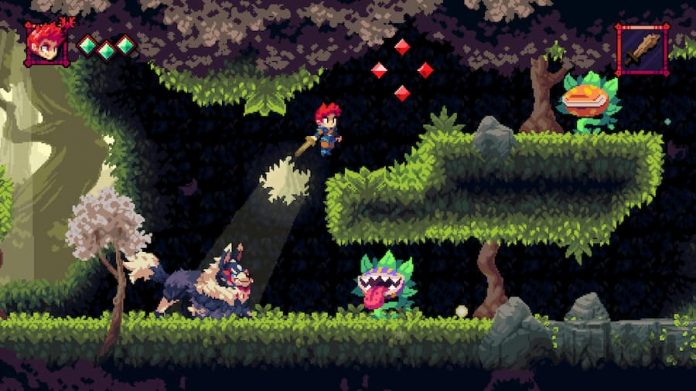 Playing Flynn: Son of Crimson is like discovering a classic of the Mega Drive era that you never played.

Like a blast from the past, Flynn: Son of Crimson has charmingly pixelated visuals, easy to pick up but hard to master gameplay, and a story that’s clichéd but entertaining nonetheless. And while it doesn’t have any voice acting, it has a sumptuous soundtrack that sticks in your head long after you’ve stopped playing.

Playing as the eponymous Flynn, your journey begins on a day that seems like any other. With little to do, it’s suggested you take your trusty companion Dex on a walk, while also cutting down any weeds you encounter along the way. After stopping for a short rest, however, you sense that trouble is afoot. Taking off by yourself, you soon encounter a stranger tinkling with some kind of ancient artefact, and they don’t take a liking to your presence.

It’s when the stranger cuts you down that the artefact springs to life, imbuing you with an unknown power with a crimson hue. With the balance of power shifted, you get the better of your attacker, but the untimely arrival of Dex sees the now incensed troublemaker stealing her power of a Guardian. And so, can you rescue your beloved Dex and find out more about the power that now courses through you? You’ve got to at least try. 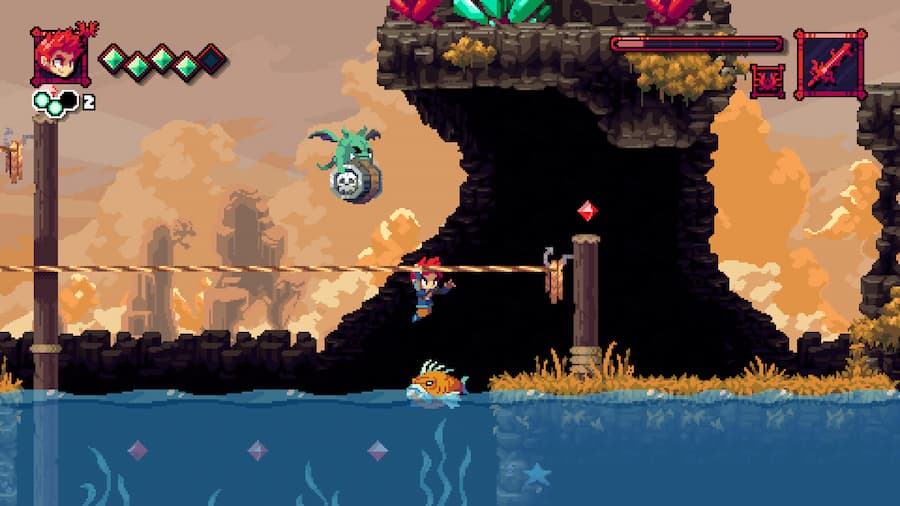 A platformer at its heart, Flynn: Son of Crimson also has its fair share of combat. Initially Flynn can only slash with his sword, but other weapons are available later down the line. His new powers also allow him to release balls of magic to attack from a distance, too, which can be imbued with numerous elemental properties. And when it comes to defence, a nifty roll manoeuvre allows him to pass through enemies and their attacks unharmed. He’s bound to get hit at some point though, and that’s when a container of restorative power comes in handy.

Levels are accessible via a map, and are generally unlocked in a linear fashion, though some do have multiple exits. Along the way, there are towns and other locations of interest to visit as well. There, you’re able to talk to Flynn’s friends and acquaintances to acquire information, or even exchange the red crystals you’ve acquired on your journey for new abilities and upgrades. And sometimes Flynn discovers keys, opening up yet more alternative exits to levels previously completed. They occasionally lead to challenges. 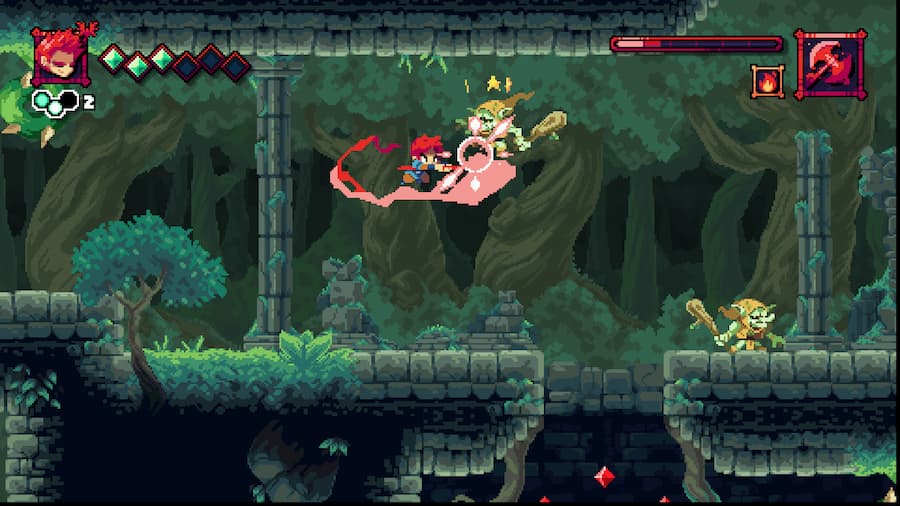 You’re also sometimes forced to backtrack, with an area of the map being locked down until you’ve located and dealt with something called the Scourge. Revisiting a Scourge-infested level, you’ll find it occupied with new enemies, and even a giant phantom axe that pursues you at times. It’s only once you’ve found the ball of energy that’s causing the anomaly and destroyed it that you’ll be able to continue your adventure.

There’s nothing really new or overly exciting to be found in Flynn: Son of Crimson, but its well-executed blend of platforming, combat and light puzzle-solving keeps you occupied from beginning to end. It’s a fairly short, easy-going adventure (though it does have difficulty levels if you want more of a challenge), and one that’s sure to please fans of old-school platformers – just as long as they’re not expecting anything revolutionary.

This review of Flynn: Son of Crimson is based on the PS4 version (played on PS5), with a code provided by the game’s publisher. It’s available on PS4, Xbox One, Switch and PC.