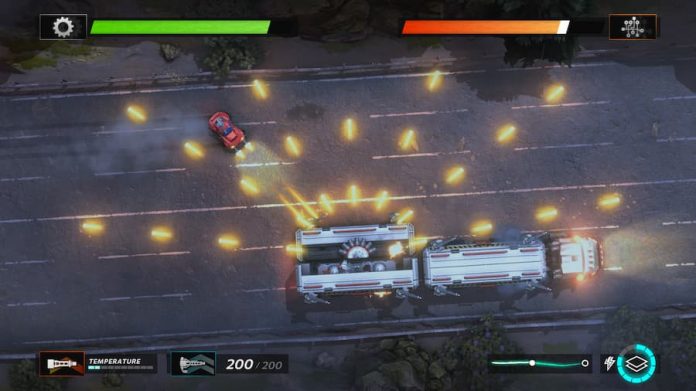 If there’s one thing that videogames have taught me, it’s that making deliveries in the future is going to be perilous.

Gearshifters joins the ranks of games such as Death Stranding and Mirror’s Edge in tasking you with making deliveries under trying circumstances. Specifically, each of the nine zones you have to drive though to complete the jobs thrown your way are run by a troublesome faction. Ultimately you’ll want to take them all down, making your job much easier in the process.

Essentially a horizontally-scrolling shooter, what makes Gearshifters stand out from the crowd is the fact that you’re driving a car rather than flying a ship or another object. Speeding through streets via a top-down viewpoint, it’s up to you to outmanoeuvre your opponents and shoot them to smithereens. Though simply crashing into them will also do some damage.

Initially your vehicle is pretty bog-standard, equipped with just a forward-firing light machine gun. But as you complete jobs, each one requiring you to make your way through multiple zones, themselves split into numerous stages, you’ll able to upgrade it in a number of ways. You just need two things to do so: schematics and cash. Both are acquired naturally as you play the game. 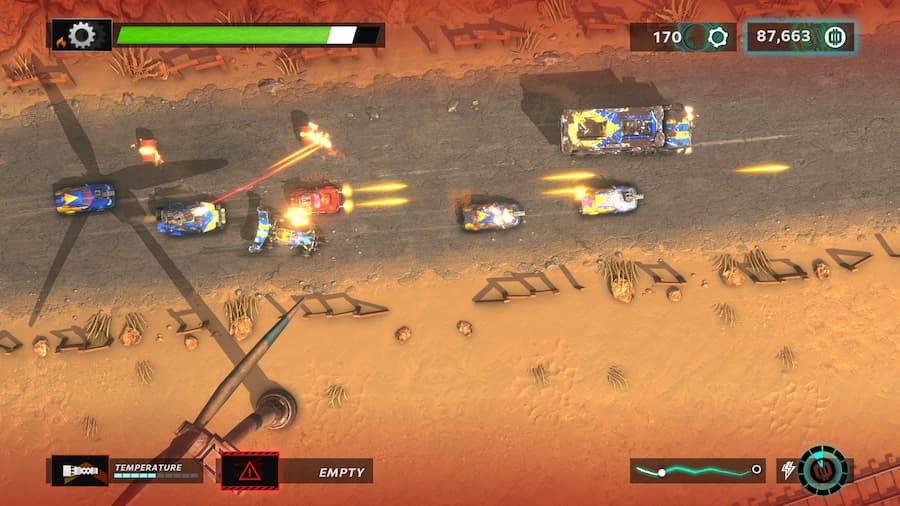 Multiple primary weapons are available, and a secondary weapon can also be purchased and attached to your vehicle. The capabilities of your vehicle can be improved too, making it faster, easier to manoeuvre and more resistant to damage. Throw in a selection of charged abilities, and numerous skills you pick up over the course of the game, such as being able to turn around momentarily to fire at those behind you, and you have plenty of variables to give the gameplay depth and keep it feeling fresh.

Like most shoot ’em ups, Gearshifters is challenging, too. Numerous enemy types are thrown your way, each with their own tactics to take you down. Some will try to ram you, for example, others will shoot you with projectiles ranging from bullets to blades. Later on, some enemies will even disrupt your weapon systems for a short while if they manage to hit you with their electricity based attacks.

It’s the game’s well-designed bosses that will give you the most trouble though, requiring you to put all the skills – and weapons – at your disposal to good use. They’re made even tougher by the fact you need to beat them before you run out of road. Take too long, and they’ll simply escape your grasp, or you theirs. You’ll be able to take them on again at a later date, however.

Gearshifters doesn’t need to be a gruelling experience if you don’t want it to be though. Three difficulty levels are available, with the easiest giving you ample checkpoints, and the hardest turning it somewhat into a roguelike. There’s also a damage scaling option, allowing you to adjust incoming damage between anywhere from 0-500% in small increments. That’s right, you can enable God Mode if you’d like. 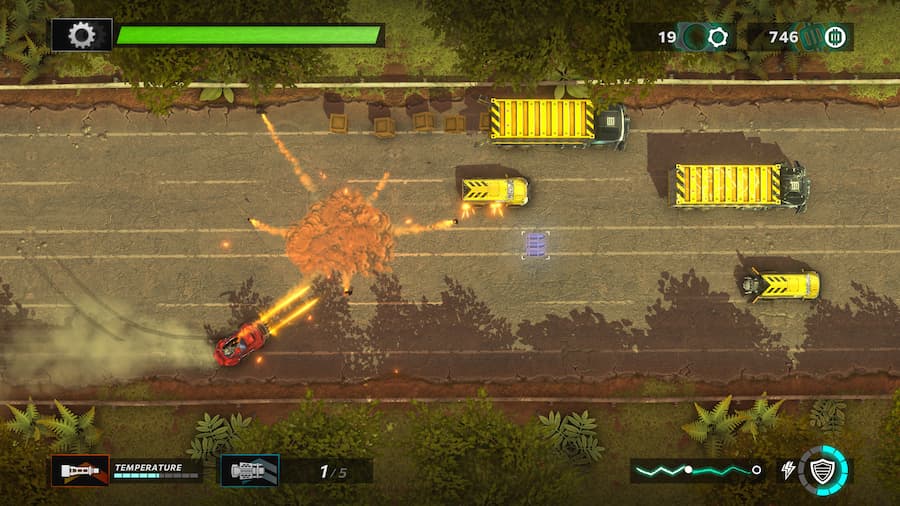 The only disappointing thing about Gearshifters is that there aren’t any additional modes offering quick doses of action. Some kind of score attack mode with leaderboards would have been nice, or perhaps an endless mode that challenges players to see how far they can get.

Gearshifters’ fresh take on the horizontally-scrolling shooter template makes it easy to recommend not only to shoot ’em up fans, but also those into car combat games. There’s something immensely satisfying about slamming hard on the brakes to quickly get behind a group of assailants, before unleashing a barrage of bullets at their rears and speeding back up to ram them. Throw in a wealth of car upgrade and customisation options, and you have a game that’s fun to return to time and time again.

This review of Gearshifters is based on the PS4 version (played on PS5), with a code provided by the game’s publisher. It’s available on PS4, Xbox One, Switch and PC. 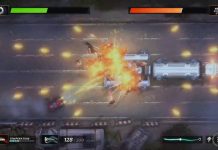