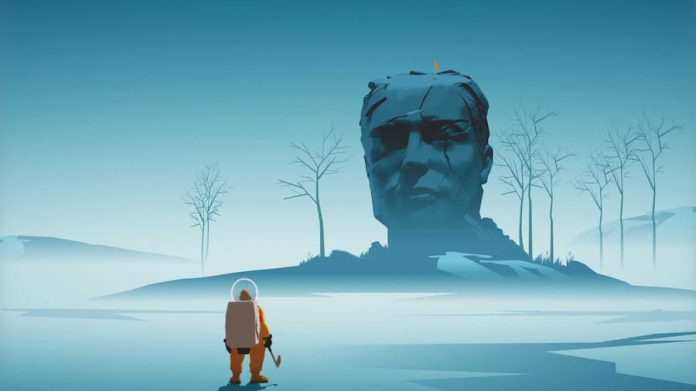 I’m not a golfer, but if we ever did abandon Earth, only to return to it for a leisurely round or two, I’d consider becoming one.

That’s basically the premise of Demagog Studio’s Golf Club: Wasteland; with Earth abandoned by humans due to it becoming inhospitable, it’s now little more than an outlandish golf course for the ultra-rich. You’re one of them, and so with your space suit on, your jet pack powered up and your clubs in hand, Earth is now your playground.

Playing Golf Club: Wasteland for the first time, you have the choice of two types of experience. Jump into the game’s Story mode and you’ll find it to be laid back overall. Holes are presented as levels, and they start out very simple indeed. Using the left analogue stick you can determine the power and angle of your shot. Then, with a single push of a button, you take your swing. Repeat until the ball is in the hole – your score really doesn’t matter. If you’re really struggling with a hole, the game will even give you the option of skipping ahead.

The first few holes do a decent job of getting you used to the game’s mechanics, offering few obstacles for you to overcome. It will probably take you a swing or two to get used to things, but soon enough you’ll be fairly confident at hitting the ball where you want it to go. I say fairly, as even after spending a decent amount of time with Golf Club: Wasteland you’re likely to still feel there’s a element of luck involved. It’s hard to consistently be at the top of your game, and sometimes you’ll feel like you’ve lined up the perfect shot only for your ball to go too far or not far enough.

Those that are confident in their skills, however, can tackle the game in Challenge mode, in which they need to complete each level within a certain number of shots. There’s an unlockable Iron difficulty, too, which leaves very little room for error. Needless to say, while you could blast through all of Golf Club: Wasteland‘s 30-odd levels in around three hours on Story difficulty, those who want to prove their golfing skills are likely to spend much more time with the game. 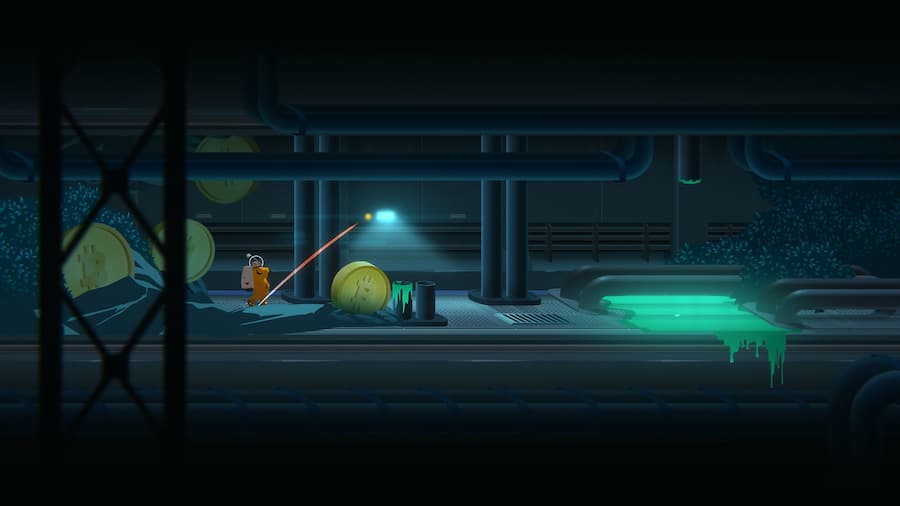 The fact that the levels in Golf Club: Wasteland become more crazy golf-like as you progress adds further challenge. Initially you might just need to avoid a pool of water, for example, or a hazardous cow. Simple stuff. Eventually though, you’ll need to navigate the floors of buildings, finding ways to get your ball ever-closer to the hole. Some of the levels are even puzzle-like, with you needing to hit switches to manipulate platforms, or hit your ball into the correct pipe for it to appear elsewhere. You might need to sit back and think before you take a swing.

Thankfully, to help you in your endeavours you can handily zoom the camera in and out, as well as move it around with the right analogue stick. Doing so also allows you to appreciate Golf Club: Wasteland‘s stunning visuals. The art on display here is phenomenal, with loads of lovely little touches. You might also appreciate the comical gestures made by your astronaut golfer, as well as the way he nonchalantly jetpacks to his ball after a shot.

Perhaps the real star of Golf Club: Wasteland, however, is its soundtrack. From the moment you land on Earth, a radio station called Nostalgia From Mars begins to play. Personal stories of those who managed to escape Earth for Mars are then played between a wonderful selection of tracks, providing an engaging and sometimes haunting backdrop for the golfing action. No matter which format you buy Golf Club: Wasteland on, you’re able to download its soundtrack for free, too, which is a nice touch. A free digital graphic novel art book is also included, allowing you to delve further into the backstory of Charley, the lone golfer you take control of.

Golf Club: Wasteland is a golf game that will appeal to more than just golfers. With its range of difficulty modes it caters to all skill levels, allowing it to be something to chill out with, or something to really challenge yourself with. The crazy-golf-on-steroids structure of later levels means it really will test players’ skills on harder modes, too. And alongside the easy-to-pick-up-but-hard-to-master gameplay sits an engrossing narrative sandwiched between eclectic yet always enjoyable music tracks. All in all, it’s unique and rather compelling.

This review of Golf Club: Wasteland is based on the PS4 version (played on PS5), with a code provided by the game’s publisher. It’s available on PS4, Xbox One, Switch and PC.